Saqqara ( Arabic سقارة, DMG Saqqāra , Egyptian-Arabic Saʾʾāra ) is an important ancient Egyptian necropolis on the western bank of the Nile . The place is located about 20 km south of Cairo in the governorate of al-Jiza .

Overview of the Saqqara necropolis

Already at the time of the Old Kingdom , from the 1st Dynasty to the 26th – 31st Dynasty , Saqqara is documented as a burial place. The city was probably named after the god of death Sokar . The oldest grave complexes found so far can be found in Saqqara-Nord, close to the edge of the desert, where they are raised above the fruiting land. It is a series of mastabas that are decorated on the outside with a palace facade . The first of these buildings dates from under King Hor Aha .

Already at the end of the 2nd dynasty the huge desert plateau was built with mastabas. In the 2nd Dynasty, the first kings were buried further south in Saqqara. However, only the underground burial chambers of their tombs have been preserved. With the step pyramid of King Djoser from the 3rd dynasty of the Old Kingdom around 2650 BC. The pyramids began to be built.

Kings of the 5th and 6th dynasties also built their pyramids here. In addition to these pyramids, many high dignitaries were also buried here in the Old Kingdom, as Saqqara was the necropolis of the royal seat of Memphis . The tombs of the following 1st Intermediate Period are rather small, but document an unbroken tradition from the Old Kingdom. In the Middle Kingdom , small mastaba graves were concentrated around the pyramid of Teti II and in the far south of Saqqara, where some pyramids ( Chendjer ) were also built in the 13th Dynasty .

In the New Kingdom , Saqqara experienced a special boom as an important necropolis. Especially at the time of Amenhotep III. When Memphis regained its importance, a great many high officials were buried here. The tombs of this time mostly resemble small temples with pylons and courtyards, including the first tomb of the later King Haremhab . These graves are often not well preserved.

Only a few graves can be dated to the 3rd interim period, but there are significant grave structures from the late period. Many officials have been buried on the floor of gigantic grave shafts. The necropolis retained its importance until Ptolemaic times when several large temples were built. Extensive gallery graves with animal burials also date from this period.

The Jeremiah monastery from Christian times is difficult to access today and is on the way to the Unaspyramid. An abundance of inscriptions testify in detail not only of the life of the monks, but also of its holy places.

Aerial view of the pyramid districts of Unas, Djoser and Userkaf

Almost all Egyptian grave forms can be found in Saqqara: In addition to the step pyramid, also classic pyramids of the 5th and 6th dynasties, shaft graves , gallery graves up to mastabas from all ancient Egyptian epochs. There are also animal cemeteries ( ibises , dogs , cats , bulls), of which the serapeum with the sarcophagi of the Apis bulls is one of the most outstanding. There are also at least two large, rectangular enclosures, of which Gisr el-Mudir ( Great Enclosure ) is considered to be the oldest stone structure in Egypt.

Pyramids and monumental tombs in Saqqara

Relief from the mastaba of Nianchchnum and Khnumhotep

Tombs of the New Kingdom 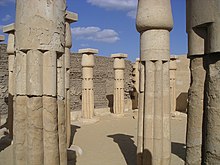 Remains of Haremhab's burial temple from the 18th dynasty.
See also : List of graves in the Bubasteion

In March 2005 archaeologists under Zahi Hawass , the former head of the Egyptian antiquities administration Supreme Council of Antiquities (SCA), found a mummy at the pyramid of King Teti in Saqqara , the age of which is estimated to be 2,300 years. Her ornate sarcophagus is considered to be one of the most beautiful ever found in Egypt . In early 2009, a group under Zahi Hawass discovered a burial chamber of the 6th Dynasty (approx. 2318–2168 BC) with 30 mummies, presumably from the 26th Dynasty (664–525 BC).

At the end of 2009 two more 2500 year old graves from the 26th dynasty were found. One of them is the largest grave ever found in the necropolis.