Haremhab's homeland is Hut-nesu in the 18th Upper Egyptian Falkengau . Its name is based on the local god Horus . Haremhab's parents are unknown.

Haremhab's curriculum vitae is not completely documented. It is believed that he was already under Amenhotep III. his military career began. Schneider assumes that it began under Akhenaten, under whose rule he is not clearly understandable. Unfinished tomb # 24 at Amarna is assigned to a person named Pa-Aton-em-hab , and Christine El-Mahdy assumes, for example, that this could be the name Haremhab bore during Akhenaten's reign.

Together with Eje , he was responsible for the move of the government from Achet-Aton to Memphis at the beginning of Tutankhamun's reign . This is certainly also because of the threatening foreign policy situation and to avoid unnecessary tension with the Amun priesthood in Thebes . In Saqqara he had a large grave built for himself, in which his first wife Amenia was buried at the beginning of Tutankhamun's reign. His high position is emphasized on the reliefs there.

Haremhab's second wife and future queen, for example, was considered by Walther Wolf and Erik Hornung for a long time to be a sister of Nefertiti named Mutnedjmet , who thus established the link to his predecessors and guaranteed the legitimacy of the rule. Wolfgang Helck , Rolf Krauss , Jürgen von Beckerath and other Egyptologists , who read the name of Nefertiti's sister Mutbelet , reject a connection between Mudnedjmet and the royal family and consider their origins to be civil, oppose this theory . This alternative reading of the name of the sister of Nefertiti is not uncontested in research, so that Mutnedjmet could in fact have been the sister of a queen and Haremhab was thus related to the royal house of the 18th dynasty.

Commander in Chief of the Army

Haremhab appears in Egyptian history primarily together with Tutankhamun and is given extensive powers at that time. He is "the king's deputy at the head of the two countries", commander-in-chief of the army , "highest mouth of the country", hereditary prince ( Iripat ) and chief asset manager . In these positions he actually leads the fate of Egypt for the growing Tutankhamun together with Eje II.

Haremhab's coronation year is notable in terms of the Sothis cycle date , since 1319 B.C. On July 6th Greg. After 1458 years in Memphis the heliacal rising of Sirius took place again for the first time in the twelfth hour of the night on the fifth day of the Heriu-renpet . About an hour later, the sacrificial rites began as part of the Sothis festival , which marked the new year and with it 1st Achet I at sunrise . This special event, which on average only falls on New Year's Day of the ancient Egyptian administrative calendar about every 1456 years , was celebrated for the last time in Elephantine by the ancient Egyptians before Haremhab's coronation year in the years 2748 to 2745 BC. Chr.

Since Haremhab could not refer to an official designation of his predecessor and a coronation was only made on the basis of a divine descent, Haremhab declared his personal patron and local god Horus in the form of Neb-hut-nesu ("Lord of Hut-nesu") to be his Father and himself to the only son of Neb-hut-nesu :

“Horus, Neb-hut-nesu, is my biological father who created me. He knew the day that Amun will agree to give him his kingship. Haremhab's god Horus, Neb-hut-nesu, raised him as his son before mankind, wishing to widen his stride until the day comes when he receives his office. "

This subsequently declared divine sonship Horemheb stepped official survey of Amun, the trip to Karnak to order at the beginning of Opet festival after the approval of Amun at 15 Akhet II (August 19 greg. 1319 v. Chr.) To to have a new ruler crowned. In this context, his recourse to Hatshepsut's account of divine descent at her coronation is remarkable, especially since a designation through the oracle questioning carried out by Hatshepsut and Haremhab represented two individual cases in ancient Egyptian history .

In addition, Haremhab had three groups of statues made, each showing him together with a deity: the first is in Turin and shows him with Amun, the second in London with Amun-Kamutef and the third in Vienna with Horus . Amun is the god who confirmed Haremhab's coronation; but it was "his father Horus" who chose him to be Pharaoh. The Vienna statue group was created in his honor .

Haremhab succeeded Eje on the royal throne after his death. The duration of the reign is controversial: Wolfgang Helck mentions twelve years and three months for this, while Rolf Krauss mentions 27 years. Obviously two years were counted: the actual reign of Haremhab and the continuation including the reigns of the ostracized kings Akhenaten - Semenchkare - Tutankhamun - Eje. Taking these kings into account, this results in a documented 58th year of rulership with a duration of 27 years.

By decree , Haremhab decrees the supply and renovation of the temple complexes and arranges sacrificial foundations. The king also tried to remedy economic and social grievances by enacting numerous new laws.

Investigations by the Saqara tomb, Haremhabs, show that Mutnedjmet was in poor health when she died and probably died at the age of around 45 as a result of a miscarriage in Haremhab's 13th year of reign.

During the reign of Haremhab, his foreign policy situation is known almost exclusively through Hittite sources. The timing of some events (campaigns) is controversial and it is uncertain which ones fall during Haremhab's reign. By the plague - epidemic in the country Hatti Egypt was in any case from some new Hittite invasions.

The stone bowl of Sen-nefer

The flat, speckled granite bowl , believed to have been found in Memphis , first appeared in stores in 1973 and has been in the family of an unnamed owner for generations. Haremhab, who devoted himself to the construction and expansion of Egypt in the first ten years of his government , undertook the first Asian campaign in his 16th year of reign, which led him to the Carchemish region via the Byblos route . In this context, the royal stable master Sen-nefer called on the four West Semitic gods Astarte , Anat , Reschef and Qudšu in his prayer for himself .

“The 16th year of reign of the Haremhab, the ruler, at the time of his first triumphant march from Byblos (Kpnj) to the land of the wretched chief of Karkemish (Qrqms 3 ). A sacrifice that the king gives; a sacrifice that Ptah gave, and Astarte ('-s-tj-rt), the mistress of heaven, and Anat (' -n-tj-jt), the daughter of Ptah, and Reschpu (R-š-pw) , the Lord of Heaven, and Qudšu (Qd-š), the mistress of the stars of heaven. "

- Excerpts from the text of the stone bowl of Sen-nefer

The indication of the war campaign of Haremhab, which led him specifically to the Karkemish region, is confirmed in the annals of the Hittite king Muršili II . According to the information provided there, an uprising took place in Karkemish in Mursili's seventh year of reign, the Haremhab rushed to the aid, but was defeated by the Hittites. For the chronology therefrom equating Haremheb gives 10. Government year Mursilis throne acquisition, which also (in a prayer CTH = 70 KBo 14.4) an omen mentioned the sun god at the beginning of its 10 government year, which mostly as the observation of an eclipse is interpreted .

The mention of the solar eclipse led to a wide variety of dating approaches among Egyptologists and ancient orientalists . Ursula Kaplony-Heckel , Edward Wente , Eduard Meyer , Emil Forrer , Friedrich Cornelius and Redford refer in their chronologies to the consideration of possible solar eclipses. Other historians do not take into account the information from the stone bowl or the possible solar eclipses, which is why there are different information about Haremhab's reign. 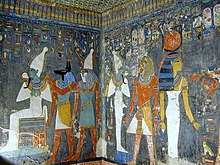 Wall decoration in the rock tomb of King Haremhab (KV57)

There is ample evidence of his construction activity. So he had Akhenaten's sun temple cut and used the talatat stones as filling material for new pylons of the Karnak temple . At the central colonnade of the great pillared hall, once by Amenhotep III. started, construction continued, and the colonnade at Luxor Temple was completed. Haremhab built a rock temple in Jabal al-Silsila and another at Gebel Adda . In Saqqara and Memphis there is evidence of his building activity. Ejes mortuary temple in Medinet Habu was usurped and expanded by him.

Haremhab's second wife Mutnedjmet / Mutbelet died at the beginning of his reign. The king commissioned his site manager Maja with the burial in Saqqara. He himself had his rock grave ( KV57 ) built in the Valley of the Kings .