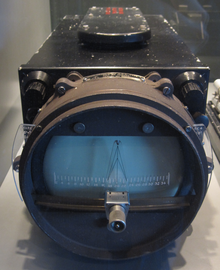 ASDIC is actually the abbreviation for Allied or Anti Submarine Detection Investigation Committee , but is mostly used as the name for a location system developed by them for the detection of submerged submarines , a forerunner of sonar . It was used for the first time by the Allied forces in the First World War , and later technically improved in the Second World War .

It works with sound waves that are reflected from submerged boats. Based on the transit time and the direction, the approximate location and diving depth of the located submarine could be determined.

British destroyers were initially unable to effectively attack a submerged submarine with depth charges during the ASDIC location . The destroyer could only run a short voyage for a functioning location, but had to take up the speed level "extreme force" (AK) before throwing depth charges in order not to run the risk of being damaged by your own depth charges. A corresponding approach route was required for this, which gave the submerged submarine time to evade. The formation of bubbles from the screw and the bomb that might not have hit the target hampered subsequent attempts at location. The problem was later eliminated with the introduction of launchers (see also Hedgehog ), whose ammunition only exploded when hitting the target.

Initially, the ASDIC did not have the desired effect around 1940/1941, as the submarines mostly carried out surface attacks at night and the system was almost useless during such attacks. The turning point did not come until 1943, because at this time the radar was introduced on a larger scale, which made the previous surface attacks almost impossible without a high self-endangerment of the attacker.

The first successful use of ASDIC was the sinking of the German submarine U 39 (Kapitänleutnant Glattes) by the British security destroyers HMS  Faulknor , HMS  Firedrake and HMS  Foxhound on September 14, 1939. This also marked the first German submarine loss in the Second World War. The mission was preceded by the unsuccessful attack of the Ark Royal by U 39.

“On September 14th U 39 (Kptlt. Glattes) attacked the Ark Royal, but the torpedo detonated prematurely. U 39 is then sunk by the security destroyers Faulknor, Firedrake and Foxhound - the first German submarine loss in this war and at the same time the first successful use of the British SONAR underwater locator (ASDIC) developed between the wars. "