Bushidō written in Chinese characters. On the left edge the so-called seven virtues 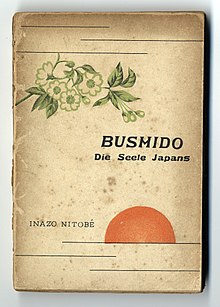 Cover of the German edition of Nitobe's book (Tokyo 1901)

Under Bushidō ( Jap. 武士道 , literally "way ( dō ) of the warrior ( Bushi )"), Germanized Buschido , is today understood the code of conduct and philosophy of the Japanese military aristocracy, whose roots to the late Japanese Middle Ages go back. The main features were borrowed from Shinto , Buddhism and Confucianism . The term owes its expression and popularity to the work Bushido - the Soul of Japan by Inazo Nitobe, written in English in 1899 . In this respect, it is a retrospective interspersed with ideal ideas, which continues to be interpreted in the 20th century and z. T. was also instrumentalized. When Nitobe wrote his work towards the end of the 19th century and chose the name Bushidō for it, he was not aware that the expression already existed.

According to Nitobe, Bushidō is an unwritten code:

“Bushidō is the code of moral principles that knights should observe. It is not primarily a written code; it consists of principles which have been handed down orally and which only occasionally flowed from the pen of well-known knights or scholars. It is a code that canonized true deeds, a law written in the heart. Bushidō is not based on the creative activity of a capable brain or on the life of a famous person. Rather, it is the product of organic growth over centuries of military development. "

Related term are u. a. Budō (way of war), Kakun (house code [of the samurai and court families]), Senjinkun (battlefield code) and Yūsoku kojitsu (court and warrior etiquette).

The word Bushidō appears for the first time in the writing Kōyō gunkan , completed in 1616 , which traces the strategies, principles and combat experiences of the Takeda clan . It is also said to be detectable in the legislation of the Tokugawa period . So the word came up at a time when the country was united and pacified under the rule of the Tokugawa after the long and brutal wars of the Sengoku period . Now it was a matter of transferring the warrior class to a state-supporting, disciplined layer of samurai officials, whereby the craft of war took a back seat in favor of moral-philosophical guiding values.

Hagakure , a collection of short stories on the life of the samurai of the Nabeshima clan , in which the author stated that he wrote the text Hagakure between 1710 and 1716 by the samurai Tsunetomo Yamamoto, became famous and used in Japan and Germany during the Second World War Decadence of its time opposed the old martial virtues.

Code of Conduct and Philosophy

Bushidō is a further development of the philosophy of Budō , which was tailored to the activities and tasks of a samurai. It deals mainly with the absolute loyalty of the samurai or bushi to his liege lord ( daimyō ) and the willingness to give his life for him and the values ​​of the bushidō. The samurai enjoyed a high reputation, not least because the warrior class had risen to become the leading social class of the country in several epochs of history.

In the feudal schools of the Edo period, the sons of the samurai families acquired in addition to their training in martial arts an indispensable training in classical literature, philosophy, history, calligraphy, Confucianism etc. ( 文武 両 道 , bumbu ryōdō , dt. Both ways of literature and war (art) ).

According to Nitobe, seven virtues played an important role in the self-image of many samurai. In particular, public violations of these virtues associated with the loss of the “face” ( mentsu ) were perceived as dishonorable . In serious cases, sometimes by order of the liege lord, ritual suicide ( seppuku ) occurred as a sign of repentance and atonement.

The five main demands of the Bushidō, which are also summarized under the term Dōjōkun , were:

loyalty
Loyalty to your ruler and love of home
Loyalty and respect for parents
Be true to yourself, diligence
courtesy
love
Humility
etiquette
bravery
Hardness and cold bloodedness
Patience and perseverance
Repartee
Openness and sincerity
Sense of honor
justice
simplicity
purity

The Bushidō in the current understanding is an idealizing construction developed in historical retrospect. In the Japanese warrior class, too, historical reality shows all human traits, i.e. in addition to legality, loyalty, and a sense of honor also betrayal, deviousness, bribery, assassination, change of party and the like. a. m.

Bushidō was never presented in writing or religiously as a manifesto for the samurai, but added up from Japanese culture, influenced by different religions and philosophies as well as the respective circumstances of the time. It was more of a way of thinking that influenced everyday life, particularly during the Edo period , i.e. during the long peace under the Tokugawa shogunate.

Bushidō's philosophy influenced some martial arts that are carried out with the weapons of the samurai, as well as unarmed disciplines (for example, some ju-jutsu and karate styles). This philosophy was again shaped by Zen .