According to some researchers, Semenchkare was Akhenaten's successor . However, no king of the 18th dynasty has so little archaeological evidence and is so difficult to classify as Semenchkare.

In the 19th dynasty , Seti I and Ramses II in particular tried to erase the epoch since Akhenaten's reign and his direct successors from history ( Damnatio memoriae ). Thus, in the list of kings of Abydos in the temple of Seti I there, Haremhab appears as the direct successor of Amenophis III. The missing years between the pharaohs Akhenaten, Semenchkare and Tutankhamun were simply attributed to the reign of Haremhab, who would thus have a reign of 59 years. But haremhab is only documented by inscriptions up to his 27th year of reign, so up to 32 years should be set for any missing kings. The later ostracized Akhenaten probably died in the 17th year of his reign, Tutankhamun again in his 10th year of reign and his successor Eje in his fourth year of reign. This ultimately results in a gap of up to three and a half years for other possible kings who are differently cast in Egyptological research.

The following theories are being discussed today by well-known Egyptologists about the passage of time after Akhenaten : 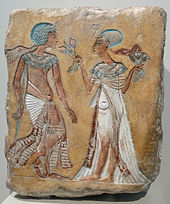 Limestone relief "Walk in the Garden" in the Egyptian Museum Berlin (No. 15000)

It is questionable which finds can be assigned to Semenchkare and which prove his position as an actual king. To this day there is no known grave, no clearly identified mummy, no statue, no stele with the name of this king. Its origin is still in the dark, as is its end.

Only in the grave of Merire II in Amarna ( Amarna grave 2 ) there is a relief with the proper name Semenchkare as well as a graffito in the Theban grave of Pairi and a few unrolled seals with the throne name, as well as two chests from the grave of Tutankhamun . These finds are often cited as evidence for this king, but none of them explicitly mention the name Semenchkare with his throne name, but predominantly only the throne name of a ruler called Ankh-cheperu-Re . However, the thin evidence has led to the attribution of all royal objects from the Amarna period that cannot be identified due to the complete lack of inscriptions to Semenchkare. Examples are “Walk in the Garden” and “Statue Head of a King” in the Museum Berlin.

In January 1907 Edward R. Ayrton discovered a previously unknown grave, grave KV55, in the Valley of the Kings . Due to parts of a grave shrine with the name of Teje and the female mummy, it was initially wrongly assigned to this queen.

It is undisputed that this is a tomb from the Amarna period , which is located in the Valley of the Kings. The grave goods found come exclusively from the Amenhotep III period. to Akhenaten: from these two kings themselves as well as from Teje, Kija , Sitamun and Tutankhamun. The unlabeled canopic jugs were originally made for a woman (probably Kija), but have been reworked for a king. The same seems to apply to the coffin which is now held for Akhenaten's coffin after the restoration of the coffin lid.

The mummy from KV55 is a male skeleton. The mummy ribbons with which it was wrapped bore the name Akhenaten ( Arthur Weigall ). The face of the mummy mask was badly damaged and the cartridge on the breast ornament was unfortunately cut out.

The physical resemblance of the body and skull to Tutankhamun and the identical blood group suggested that these were the remains of Akhenaten.

However, one fact speaks against it: Investigations by pathologists have shown that the skeleton of a 20 to 25-year-old man was found here. Since Akhenaten was certainly older when he died, there would only be one left: Semenchkare. But this statement is again controversial, because according to the latest reports from the Egyptian Antiquities Service, it is now about a 45-60-year-old man, as the latest CT examinations have shown. After that, DNA tests were planned for 2009 in order to obtain further data. The results were published in 2010 and strongly suggest that the mummy in KV55 is Akhenaten and not Semenchkare, as he was the son of Teje and Amenhotep III. was identified. Nevertheless, the man's identity remains highly controversial. It should be noted that the CT scan gives only one indication (a degenerative change in the spine) that makes a higher age at death likely. Eugen Strouhal even denies that this spinal column change can be detected at all. Many therefore continue to assume that the mummy from KV55 is Semenchkare, who would then be an unproven brother of Akhenaten or Tutankhamun.

In the case of epochs in Egyptian chronology that are not scientifically proven, reference is repeatedly made to Manetho . But that wasn't done here. For the pre-Amarna period Jürgen von Beckerath writes ( Lit .: MÄS 46, p. 125):

"Manetho's time indications do not deviate from the chronological reality at all, they deserve trust, ... the numbers obtained from Manetho would improve the chronology given."

This author sees the Amarna period "falsified, largely through the penetration of popular stories, ... the rule of foreigners and enemies of God as well as the salvation by a young pharaoh" and "that the transition between the two dynasties (18th / 19th) can hardly be determined ". The otherwise obligatory comparison of the historical names with those of Manetho is omitted.

According to von Beckerath ( Lit .: MÄS 46), the following names are assigned to seminars:

One of these proper names also already exists: Nefertiti is called Neferet-iti nefer-neferu-Aton in official inscriptions and is written in a cartouche . In Beckerath ( Lit .: Chronologie des Pharaonischen Egypt… MÄS 46, p. 113.) the following is written: “According to this, Anchet-chepru-Re can only be considered as the throne name of Nefertiti; she seems to have been made co-regent by Ach-en-Aten ( Akhenaten ) in the later years of his government ”.

The surnames ( epithets ) of the throne names and proper names listed above are translated as follows:

Anch-cheperu-Re, Nefer-neferu-Aton is loved by Akhenaten, because all epithets belong to the titular of Akhenaten.

According to Peter Munro , this name is the former name of Semenchkare (loosely translated as "Semenchkare, loved by Akhenaten" ). The main evidence for this theory are the above-mentioned chests from the tomb of Tutankhamun with the inscriptions T1 to E2 (interpreted as Semenchkare), the titular Akhenaten and a Great Royal Wife (GKG) Meritaton, who is his eldest daughter. Furthermore, the missing feminine-T in the name indicates a man. Viewed in isolation, this theory appears to be conclusive, from which a homosexual connection between Akhenaten and Semenchkare was quickly constructed. However, it contradicts other facts. Merit-Aton was named as GKG under Akhenaten. The feminine T is also often omitted, for example in Hatschepsut Maat-ka-Re and elsewhere in the spelling of the Njsw.t-Bj.t name for Njsw-Bj and is therefore not clearly to be classified as male in titles. Ultimately: the name “Semenchkare” does not appear on the chests.

The graffito in the grave of Pa-iri / Pa-wah comes from the 10th day of the III. Month of the 3rd year of Ankh-chepru-Re and shows the king worshiping Amun, thus already turning away from Aten. The inscription refers to a mortuary temple of the king that has not yet been localized and contains the partially destroyed titular T1-E2, but not the name Semenchkare (even if the titular is often translated as "Semenchkare" in literature - here one probably copies the other) . "Semenchkare" it should be written here, because according to popular opinion it has been renamed for a long time!

His name is Semenchkare in the last relief in the grave of Merire II in Amarna, where he is supposed to be represented with the great royal consort Meritaton, but the cartouches are completely destroyed. Christine el Mahdy writes:

“In the grave of Merire II, for example, both Nestor L'Hote and Achille Prisse-d'Avennes copied the same relief in the main chamber. It is badly damaged, but shows a king and a queen, whose cartouches were destroyed. Research by scientists in recent times has shown that they were originally "Semench-ka-Re Djeser-chepru-re" and "The Great King Wife Meritaton". When the British inscribers Nina and Norman de Garis Davies later faithfully copied the images from the grave walls, they reinserted these cartouches in a corner of the illustration. ”( Lit .: El-Mahdy, p. 346)

Tutankhamun, whose birth name was Tutanchaton, was accepted as the successor to this obscure pharaoh Semenchkare. However, there is no evidence for this direct succession, or whether Semenchkare ruled alone at all.