The group has 241 subsidiaries and 49 associated companies worldwide, including production sites in Japan, China, Indonesia, the USA, the Netherlands, Belgium and Germany, as well as numerous research institutions.

Further investments are made in the core business of CtP printing plates. In addition to the existing plate factories in Japan, USA, Europe and China, Fujifilm has opened a further plant in China and announced a further investment of 96 million euros in 2008 to expand the plate plant in Tilburg (Netherlands), which it put into operation in 2011.

Fujifilm Medical Systems offers complete systems that cover digital image generation through to hospital-wide image distribution. In addition to the classic PACS for use in clinics and hospitals, AXON PACS is offered as an archive solution for small to medium-sized practices or community practices. The "Medical Systems" division also includes solutions in the field of digital radiography . The company is considered the inventor of digital radiography and is the world market leader in this sector.

At the beginning of 2008, the takeover of the drug manufacturer Toyama was announced and with it the expansion of Fujifilm into a so-called "healthcare" company. Sales in the medical sector are expected to triple in the next ten years, with the spectrum then ranging from preventive medical care to diagnosis and therapy. Previously, Daiichi Radioisotope Laboratories Ltd. was taken over and integrated into the group as Fujifilm RI Pharma. This marks the entry into nuclear medicine imaging diagnosis and therapeutic radiopharmaceuticals. At the beginning of 2007, the American Problem Solving Concepts Inc. was taken over to enable the integration of cardiology into Fujifilm's own PACS system.

On December 15, 2011, the acquisition of Sonosite , a specialist in portable medical ultrasound diagnostic systems, was announced.

The Life Science segment offers fluorescence scanners and CCD camera systems for bio-imaging, digital autoradiography, QuickGene nucleic acid extraction systems for molecular diagnostics and forensics, and clinical chemistry analyzers (Fuji Dri-Chem). As part of the reorientation announced in 2006, the area was made a core business.

The myFujifilm online shop offers customizable photo products such as photo prints, photo books, photo calendars, photo cards and photo gifts that can be personalized with your own photos.

In addition to instant and disposable cameras, Fujifilm (as of February 2019) offers digital cameras in four categories:

The Hasselblad XPan and Xpan II models were also manufactured by Fujifilm and sold by Fujifilm as the TX-1 and TX-2. Another Fuji product, the production of which was discontinued in 2007, was the GX680 view camera . The current H-System is also manufactured by Fujifilm and only sold by Hasselblad. Since the beginning of 2009 Fuji has been offering a folding bellows camera for roll film in the format 6 × 7 cm, which is built by Cosina and marketed as "Fuji GF670" or " Voigtländer Bessa III". 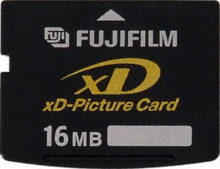 While CD and DVD media used to be mainly high-quality goods from the Japanese manufacturer Taiyo Yuden as well as from their own production in Kleve ( Germany ), most optical storage media are now from Ritek , Prodisc ( Taiwan ) and Moser Baer ( India ) for Fujifilm manufactured.

Fujifilm was the second largest producer of motion picture materials . These were divided into three areas: camera negative films for recording, intermediate films (for analog and digital copies), and print films for projection. The production of cinematographic materials was discontinued in 2012 and sales ended in March 2013. 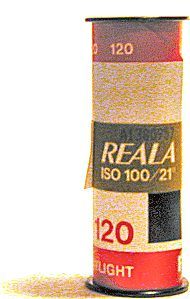 Fujifilm became widely known in West Germany around 1981 as a provider of slide films ("Fujichrome 100"), the market launch of which was advertised with great advertising effort (including the use of a blimp over the Ruhr area and the Rhineland ). For the first time, these films were able to successfully compete with the established US American ( Kodak ) and German ( Agfa ) competitors, as they initially only cost around two thirds of the competitive products with comparable quality.

The professional Velvia - color slide film , since its introduction in the late '80s as one of the sharpest and most colorful color slide in the market; Other well-known products for professional photographers are the Fuji Provia 100 F, 400 F (was replaced in 2007 by the Provia 400X, which in turn was discontinued in 2013), and the Velvia 100 F and the limited Fortia slide film available only in Japan . In 2007 the successor to the "Velvia" was introduced, the "Velvia 50" with a modified emulsion that was necessary due to delivery problems with the chemicals used previously. In summer 2012, however, it became known that numerous formats in the “Velvia” range would be withdrawn from the market at the end of the year due to falling global demand.

At present (2017) it is unclear whether the color negative film Superia 400 X-tra (also sold as "Agfaphoto Vista Plus 400") will still be produced, or whether only batches produced up to 2017 will be sold.

In 1966 Fuji developed the single-8 format as an alternative to the Super-8 format from Kodak , which gained considerable popularity among narrow-film makers in Japan, but played only a subordinate role in the European market after Super-8. The cartridges of both systems are not compatible, but the film after development is.

Locations in Europe and Germany

Fuji Photo Film (Europe) GmbH was established in Düsseldorf as early as 1966 . The Group's German and European headquarters are still located here today. As part of the introduction of a holding structure in the group in 2006, the previous Fuji Photo Film (Europe) GmbH was renamed Fujifilm Europe GmbH . In 1982 the group moved the headquarters of its subsidiary Photex (later Eurocolor) to Willich . In this large laboratory, photo finishing was carried out for partner companies, for example various discounters , until 2010 . In the mid-1980s, the group with two companies also settled in Kleve and at times employed more than 500 people there, primarily in the production of magnetic and optical storage media. However, around 400 jobs had to be cut in several steps until production was completely stopped in 2009.

In May 2019, Fujifilm bought the German medium- sized company Medwork from Höchstadt with 139 employees and added the endoscopy area to its portfolio .

In the center for basic research, interdisciplinary cutting-edge research in photonics , nanotechnology and functional materials takes place. Our own Life Science research laboratory with a focus on medical therapy and health works in areas such as protein , DNA analysis , and diagnostic systems. An organic synthetic chemistry research laboratory focuses on highly functional organic materials, organic electronics and medical imaging . Around 6–7% of global sales are invested in research and development every year.

As a member of the Environmental Health and Safety Committee Meeting, Fujifilm works with other companies in the industry to create standardized data sheets for photo products worldwide. Customers can use these to see all of the data relating to the environment and safety relating to the chemicals, materials or machines in question. Fujifilm takes environmental responsibility for the entire product cycle from development to disposal. 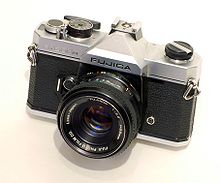 In 1934, as a spin-off from Daicel , Fujifilm began producing the first motion pictures in Japan. Little by little, new business areas were opened up; in the 1930s these were initially the areas of photographic film and X-ray film. In 1944 the Fuji Photo Optical Company was founded (now part of the Fujifilm Group as Fujinon). In the 1950s, the first computer was produced in Japan and the world's first recordable video tape. In 1962 Fuji Xerox Co. Ltd. founded as a joint venture between the then Fuji Photo Film Co. Ltd and Rank Xerox. Fuji Xerox has been producing digital printing systems for Xerox ever since. In the 1970s, the production of printing plates was started and the entry into the market for graphic systems was completed.

From the 1940s to the mid-1980s, Fujifilm was primarily represented on the market with the Fujica trademark for SLR cameras.

In the 1980s, Fujifilm was the first company to digitize an X-ray image and is therefore considered the inventor of digital radiography. In 1982 Fuji Tilburg was founded in the Netherlands as a production facility for the European market. The recyclable single-use camera was introduced in 1986 and the first digital camera with an exchangeable storage medium was presented in 1988. In addition, magnetic storage media, e.g. B. made music cassettes , video tapes and floppy disks . To extend the service life, the magnetic tape or the magnetic disk were additionally coated with an abrasion protection.

In the 1990s, the production of CTP plates for the printing industry was started, the world's first digital minilab was presented, and the foundations were laid for the development of a film-based carrier material that is used today in LC displays. In the years from 2000 onwards, the world's fastest full-color digital publishing system was introduced, as well as modules consisting of a recording sensor, software and lens for use in mobile phone cameras. In 2001 the shares in Fuji Xerox were increased to 75% and the company was integrated into the Fujifilm Group.

Other business areas are materials for flat screens and display elements ("displays"), an area that is now part of the core business. The so-called "Medical Systems", "Life Science", graphic systems, "Imaging" and document management areas continue to play a major role. In 2008, the takeover of the drug manufacturer Toyama was announced in order to expand Fujifilm into a so-called "healthcare" company and also to enter the field of therapy. In 2012 the “Astalift” skin care range came onto the European market. 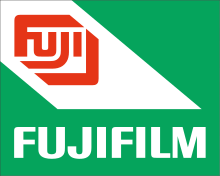 In October 2006, the group introduced a new “corporate logo”. The change was related to the introduction of a holding structure, which also reorganized the strategic management of the group. The new logo has been used worldwide since October 1, 2006. The previous logo had been in use since 1980, so it was in use for 26 years.

From 1981 to 2006 a blimp with the Fujifilm logo from the WDL Luftschiffgesellschaft with the registration D-LDFO was in use. In 2006, Fujifilm stopped advertising airships completely. The decision was justified with a new direction of the company and a different use of the advertising budget.