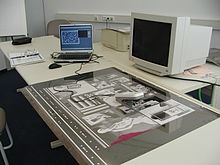 An ablative negative offset printing plate being remeasured after printing (magenta). This type no longer needs development, just suction in the CTP imagesetter

In contrast to indirect imaging using the conventional computer-to-film (CTF) film exposure process, CTP saves considerable assembly and material costs. At the same time, higher quality printing results can be produced with directly imaged printing plates, since the edge definition of the raster points is higher and finer screen rulings can be used. Another advantage of this process is the reduction of various mechanical influences on the printing plate , such as incorrect exposures, dust and scratches. Since around 2014, offset plates have been on the market that do not require development or gumming after the plate has been exposed, the so-called no-process plates. The unexposed printing layer is washed out in the dampening unit of the printing machine. This limits other quality-reducing factors. Today, TIFF -G4 is mostly used as the data format in the CTP process . 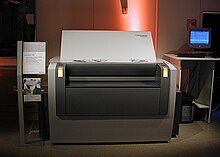 "XPose", the imagesetter from Lüscher 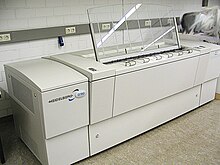 "Trendsetter", the imagesetter from Creo and Heidelberger Druckmaschinen AG (until 2001, then Creo Scitex)

CTP is a generic term for numerous different imaging processes for offset printing plates. The CTP recorders differ according to their construction in internal drum , external drum or flatbed recorder and in terms of the light sources used, in violet and thermal laser and UV light sources , as well as the plate coating and the development of the exposed plate. Most laser light sources are in the visible light range. For the respective sheet material, this means that it is processed under complementary light. The processing of thermal plates in daylight should be most pleasant , as well as the creation of violet plates under yellow safety light .

UV exposure in the flatbed

The light from a UV lamp is directed onto the printing plate via optics and projects rastered partial images onto the flat plate during each exposure process. The exposure head is moved horizontally and vertically over the plate and combines the partial images to form an overall image.

The most common are the infrared diodes for thermal plates . During the thermal imaging of printing plates, a physical change is created in special thermal plates. Polymer components of the coating dissolve and are washed out in a subsequent development process. With thermal CTP imagesetters, the digital thermal plate is clamped onto a rotating outer drum. Exposure is carried out with multi-beam laser diodes in the spectral range of 830 nm. Due to the complex design of the external drum imagesetters, they are more expensive than internal drum imagesetters. However, the process offers a high level of process stability during exposure and development. Nonetheless, thermal CTP imagesetters with an external drum design have established themselves on the market and today have a market share of over 60 percent.

Light-sensitive plates based on silver halide or photopolymer are used for recorders with violet diodes. Both have proven themselves in exposure systems that work with visible light between 405 nm and 680 nm. Silver halide plates have a high resolution and allow runs of up to 350,000 prints. Additional burn-in to increase the number of copies is not possible, however. Photopolymer plates have a high process stability and guarantee a run length of 200,000 prints. Baking is required to increase the run to a million prints and to use UV inks. The silver halide plates are imaged in a positive way, in that the non-printing image areas are imaged while the photopolymer plates work negatively, i.e. the printing image areas are imaged. In analogy to plate copying with negative film, in which the areas of the plate that will later carry ink are also exposed, this type of plate imaging was designated as negative. This is why the letter N in the "Ozasol N90" is derived from Hoechst Kalle (now Agfa).

Thermal printing plates are also differentiated according to their negative or positive working method, depending on the type. In the negative process, the polymers in the printing image areas are crosslinked, which is generated by the high energy of the laser beam. Subsequent heating of the entire plate strengthens the primary cross-linking before the non-cross-linked polymers are dissolved in the development process and the aluminum is exposed in the non-printing areas. In the positive working method, the high energy of the laser beam destroys the crosslinked polymers in the non-printing image areas, which are removed in an alkaline development process. There is no need for additional heating of the plate. By burning in the finished, illustrated and developed plate, it is suitable for long runs of a million prints and more. Thermal printing plates are preferably used in newspaper printing.

The latest generation of printing plates, the environmentally friendly ablation plates, no longer require developing machines. A distinction is made here between chemical and process-free plates. In the case of chemical-free plates, the exposed layer is sucked off directly during exposure, and the dampening system in the printing machine removes the minimal remaining fine dust from the plate. The process-free plates come from the CTP system to the printing machine without reworking and are stripped there when the machine starts up. In general, the ablation plates require higher energy or longer exposure times during imaging. The ablation plates need less moisture and are faster in the color-water balance . They have the same resolution and print run stability, a somewhat faster free-running behavior than normal printing plates, but are somewhat more sensitive to handling.

History of Computer to Plate

Thomas Kälin from the canton of Schwyz, Switzerland, is considered the developer of this technology . In the 1980s and 1990s, prepress developed from purely analog to digital printing . At the same time, the EDP and EBV systems achieved a level of performance that allowed extensive data processing in the preliminary stage. A first step was the use of Computer to Film (CTF) and thus the output of a full-page and later a full- sheet film . Another requirement was the development of thermally sensitive offset printing plate coatings, suitable lasers and laser diodes for exposure, as well as optical-electronic controls and laser guidance systems that originate from defense technology.

The current state of the art can be seen very clearly at the trade fairs for the printing industry. The first CTP imagesetter was presented at IPEX 1993, the second largest trade fair after drupa . The hundredth CTP system was sold at drupa 1995. At the IMPRINTA 1997 there was the news that 600 CTP platesetters had been used worldwide. Drupa 2000 presented the violet laser as a special innovation. According to a survey at the beginning of 2001, there were around 6,000 CTP systems worldwide. At drupa 2004, a new generation of CTP systems was presented that were more powerful, of higher quality and even cheaper than their predecessor models. The environmentally friendly ablation plates were presented at drupa 2008.