With newspaper printing , the area is printing technology called, are produced in the under special conditions, such as speed, flexibility and low cost, daily newspapers. 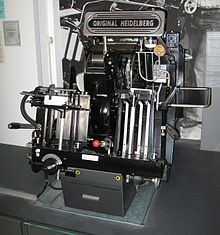 After the invention of printing with movable type by Johannes Gutenberg in the middle of the 15th century, newspaper-like prints, the so-called single - sheet prints, soon appeared in addition to book production . These were illustrated sheets of paper printed on one side, which were event-related and did not appear periodically. They were printed on a book printing press that Gutenberg had developed from presses for the winery. He changed the wood press in such a way that it could be used for printing effectively and productively. A press was usually so large that the contact pressure that could be achieved with it was sufficient for printing a folio page (21 × 33 cm). A letterpress printing press of this type is called a platen printing press ; it works according to the pressure principle surface against surface and requires high contact pressure. The German relation from Strasbourg, first published in 1605, is considered the first (weekly) newspaper .

An important further development was the invention of the cylinder printing machine by the German book printer Friedrich Koenig in 1812. A new era began in the history of newspaper printing, because on November 29, 1814, the London Times was the first daily newspaper in the world to feature such a cylinder printing machine and with Steam engine power produced. Cylinder presses use a cylinder as the printing forme or counter pressure and, due to the strip-shaped pressure, require a significantly lower contact pressure than platen printing presses. This enabled larger formats to be printed at higher speeds.

In the 1970s, newspaper printing increasingly shifted to offset printing, which was more flexible and cheaper to work with. Offset printing is based on the lithography invented by Alois Senefelder in 1796 . The English term offset describes the two-fold transfer of the printing ink from the printing plate first to a rubber blanket and from there onto paper. In modern production facilities for newspaper printing, web offset presses are used. The paper web runs vertically upwards from a roll and passes through the various printing units in which the web can be printed on both sides in four colors in one pass.

Development of the printing form

In the case of the platen and cylinder printing presses, the flat printing form consisted of individual letters and the pictures and illustrations were made from woodcuts or wood engravings . In contrast, the rotary machine required a cylindrical printing form. The problem was solved by stereotype by making casts from the flat printing forms and bending them according to the cylinder diameter. The text was then set in the typesetting machine and the mostly monochrome pictures were inserted in the form of rasterized clichés . The first photo typesetting device came on the market around 1960 and by 1967 the lead type had almost been replaced. The images were electronically scanned and engraved in the Klischograph . At the same time, the transition to offset printing took place, which required printing templates on film. Texts and increasingly colored images were assembled in sheet assemblies and copied onto printing plates. The conventional copying process was largely replaced by the electronic computer to plate technology (CTP) in the 1990s . In this case, the printing plate is imaged directly with computer data in an imagesetter, without going through a film. The latest development since 2008 is called Computer to Press or Direct Imaging , in which the printing plates are imaged directly in the printing machine.

Newspaper printing now takes place exclusively in web offset printing . Due to the poor quality of the paper and the high speed at which the paper webs run through the printing machine , very special requirements are placed on the machines. These can be designed for small editions with 10,000 copies as well as for mass sheets with millions of copies. This is why newspaper printing presses consist of modular printing units that are adapted to the number of pages, the number of copies and the color, and which are extremely flexible.

A constant trend towards automation can be observed in newspaper printing . The machine operator is to be relieved of routine work and has developed from a manual printer to a print manager at the machine's control station. In the past, panel production was the bottleneck in the production process. After the widespread introduction of CTP , this problem in the workflow has shifted to plate changes in the machine. Newspapers with 20 local editions or more are not uncommon and each edition means complete or partial plate changes in certain printing units.

The manufacturers of printing machines offer different solutions for this problem. This is how the semi or fully automatic plate change was developed. In 2005, the imaging of the printing plates directly in the machine, the so-called computer-to-press , appeared promising . After technical controversies, external imaging on fast photopolymer or thermal CTP systems has become established.

The tonal range should be between 3% and 95%. The specified tone value increase in the mid-tone (40% area coverage) is 26.2%. The increase is less in the highlights and depths. The screen ruling should be at least 40 lines / cm, the screen angle is 15 ° for cyan (C), 75 ° for magenta (M), 0 ° for yellow (Y) and 45 ° for black (K), the dot shape is that elliptical chain point. The maximum ink application is limited to 220% or 240%, as no ink drying is used in newspaper printing. The order of colors in the press is either CMYK or KCMY, which is black, cyan, magenta and yellow. Delivered image reproductions must be converted in CMYK mode. Negative fonts in colored areas should not be smaller than 7 points , as the increase in tone value and the permitted register tolerances of 0.20 mm can make the text illegible. For the same reason, the black text, which is usually resolved in multiple colors, should be corrected to 100% black so that the font remains legible in the event of register differences.

In accordance with ISO standard 12647-3 from 2013, WAN-IFRA has been providing two ICC profiles since 2015 for the correct processing of black and white and color images.