A Klischograph ( fr. Cliché "printing plate" and -graph ) is a machine for the mechanical production of printing forms for relief printing process , the so-called cliches . The device was developed in 1953 by Rudolf Hell in Kiel and presented to the experts at drupa 1954. The Klischograph represents the beginning of the mechanization of the reproduction technique in the graphic trade, which was until then handcrafted , and was initially intended exclusively for newspaper printing . 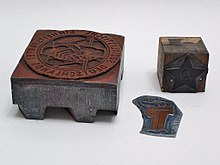 The first tests were carried out in the Hell's laboratory in Kiel as early as 1951 . In 1953 the practical test took place in a Swedish company. It was evidently successful, so the Klischograph could be presented at the drupa trade fair in 1954. At that time there were telephoto devices that could transmit black and white images to the newspaper offices. However, there was no way of reproducing these images, which often arrived at the last minute, in time for newspaper printing. The clischographer was able to fill this gap. However, the device has not yet been able to make any scale changes, but only reproduce in a 1: 1 ratio. The maximum format of the clichés was 15 × 20 cm, the screen width was initially only 26 lines per cm and could only be used for newspaper printing. In 1964, 2,500 standard first-generation clischographs were installed worldwide.

Hell presented the next generation at drupa 1958, the Vario-Klischograph . He was able to produce single and multi-colored raster engravings as well as line engravings and combined reproductions. In addition to newspaper and letterpress printing, it was also used in offset printing by engraving copyable foils instead of zinc. In addition, he was able to reproduce continuous enlargements of up to 400 percent and reductions of up to 33 percent for clichés up to a size of 31 × 43 cm of reflective and transparent originals. The screen rulings were variable and were either 24, 26, 32, 40 or 48 lines per cm.

At the end of the 1970s, offset printing became more and more important compared to letterpress printing, so the Vario-Klischograph soon became obsolete. Many of the existing devices were increasingly used only for offset printing and engraved orange-coated plastic foils that were copied onto film.

The Klischograph is an electronically controlled engraving machine that is used to produce print-ready clichés. The original image runs horizontally under an optical head and is photoelectrically scanned by a photocell . The photo currents generated by the light are greater, the brighter the scanned image area. After appropriate reinforcement, they control the depth of the burin penetrating the material to be engraved. The entire original is scanned line by line. A three-edged, pointed burin on the engraving tool cuts large or small areas out of the smooth surface of the material, for example a zinc plate. The larger the cut-out areas, the lighter the printed tonal value will later be. The cut out chips are sucked off. The setting and operation of the device is relatively easy and the actual engraving process is automatic. On the other hand, knowledge of reproduction technology is required for the operator of the machine in order to be able to assess the result.