Classical printed information sources such as magazines , newspapers , books , catalogs , geographic maps and plans , but also postcards , calendars , posters , leaflets , pamphlets , posters , etc. are referred to as print products ( print media or (with Anglicism ) print media ) . The group of advertising and gray literature, as well as publications outside the book and magazine market, is particularly diverse and difficult to survey . B. the university papers .

Print products are almost always produced on paper , although printing technology is changing rapidly and digital printing technology is becoming more and more common - for example with print-on-demand or the corresponding book-on-demand . At the beginning of the third millennium, most printed products are produced with printing inks and on printing machines, today mostly using offset printing . In the area of ​​the above-mentioned “gray media”, however, xerocopy (so named after the Xerox company , and today mostly referred to as photocopy ) is still of great importance. Older processes such as screen printing are still important, but are in decline.

The press law is in the country's laws governed the individual states. Legally, every publication (of a medium) is already a publication, including a brochure , a poster , a leaflet or a single note on the bulletin board in the university cafeteria , a concert or theater performance , a lecture or even a solo in the pedestrian zone . There must therefore be someone responsible for every publication in print form; In the case of magazines and newspapers, this is usually the editor-in-chief ; in the case of posters and leaflets (so-called flyers ), the person who is stated as responsible in terms of press law (V. i. S. d. P.) is liable .

Both editors-in-chief and those responsible in terms of press law are liable under civil law with their private assets and personally criminally if the publication commits a criminal offense and / or the protective rights of other people are violated. In the past, protection of the person and personal honor (cf. the concept of human dignity in the German Basic Law ) has been understood here under protective right ; Whether this regulation also applies to copyright infringements is currently (Oct. 2004) still disputed.

People who feel attacked or disadvantaged by a misrepresentation (assertion of fact) in an article generally have the right to a counter-representation in printed matter. However, a number of criteria must be observed here, the exact description in the counter- notification article .

The imprint obligation is prescribed by the press regulations. An imprint must be published in every periodical publication . The purpose of an imprint is so that authorities, readers and advertisers can determine, among other things, from which publishing house the publication originates and, above all, who is responsible for the content and who is responsible for which part of the publication under press law. An imprint must contain the so-called origin information, i.e. the publisher's address, the business address and the name of the person responsible, as well as the name and address of the printer . The printer's address is important in order to be able to stop printing or delivery in the event of temporary injunctions. The names of the department heads and advertising managers must also be published here. In this way, those affected by disputes, under civil or criminal law, can determine who is responsible and make them liable or enforce their right to a reply in the event of a factual assertion.

Another typical duty of journalists and editors is the duty of care. Journalists , editors, etc. are obliged to check their content, origin and truthfulness before distributing their news and thus to exercise care in their journalistic activities. This is to prevent incorrect or criminally relevant content from being published.

In addition, editorial offices, journalists etc. have the right to refuse to provide information about their informants, also to investigating authorities or in court. This is stipulated in the so-called right to refuse to testify . The gathering of information by journalists is thus protected from state interference, and part of the freedom of the press (Art. 5 GG) is guaranteed. This also means that documents may not be confiscated by editorial offices. It was not until February 2007 that the protection of informants and the freedom of the press were strengthened by the so-called Cicero judgment by the Federal Constitutional Court . More information on the right to refuse to testify can be found in the corresponding article.

In contrast to the printed products, the new media are provided, which today are predominantly available in digitized form, for example CD-ROMs , DVDs , digital books ( e-books ) or web publications . However, due to media formats that can be converted into one another (see PDF ) and their increasingly general use, the transitions here have become fluid.

In the media landscape shaped by the World Wide Web , the print edition often only represents the counterpart to the electronic journal , pre-published articles in the online edition of a journal and the digital book . The paper edition usually deals with more topics than the online version, while the the latter is intended to advertise in particular the publisher's printed products. Due to the time required for the printing process and distribution , the print edition is usually less up-to-date, but represents an important source of income for publishers in addition to the income mostly generated through internet advertising and micropayment for publications published on the internet .

The third media group is the group of fleeting, one-off publications, either through the so-called broadcast media, publications on radio and television , also locally or on the Internet, e-zines or blogs , on an intranet , or through public performance ( speech , exhibition , Theater , concert ). Public here means that it is not just a defined, self-contained group of family, company, organization or society members, but here too the boundaries are blurred. 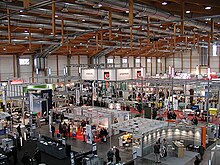