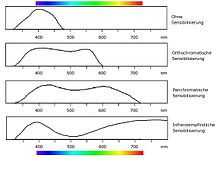 In analog photography , one describes sensitization

The photographic plates from the early days of photography were predominantly sensitive to blue rays, but little or not at all to green, yellow and red; This is due to the fact that silver bromides only absorb light in the ultraviolet and blue spectral range without further additives.

As a result, blue and purple dresses were often represented in white in early photographs, while yellow and red were represented in black. The photography based on colored objects ( paintings ) thus encountered the greatest difficulties. Luminous clouds in sunset images, for example, appeared black in photography, while the dark blue sky, on the other hand, appeared light, etc., and these defects could only be covered by retouching the negative .

The cause of this sensitivity of photographic plates to blue and violet was recognized in the fact that the plates essentially only absorbed blue and violet light and that only these absorbed rays acted on the plate, the rest not.

All old processes such as heliography , daguerreotype , calotype as well as collodion wet process and early gelatin dry process are affected .

As early as 1873 Hermann Wilhelm Vogel tried to add substances to the silver bromide which would absorb the green and yellow light in order to make the photographic plate sensitive to these rays. The attempt was finally crowned with success with the discovery of eosin in 1884 and became the basis for the development of color-sensitive, orthochromatic methods. Vogel used slightly different organic dyes such as fuchsine , cyanine and eosin for this purpose , but initially only achieved sensitization for the middle wavelengths of the optical spectrum.

At first Ducos de Hauron tried to apply this principle in practice. The adverse effect of the sensitizers on the photographic chemicals, however, put obstacles in the way of practice, which were mainly removed by the introduction of the gelatin dry plates by Richard Leach Maddox around 1871.

Attout Tailfer brought eosin-stained isochromatic gelatin plates onto the market in 1883; In 1884 Vogel discovered the optically sensitizing power of Jacobsen's quinoline red and used it to prepare the color-sensitive azaline plates with the addition of quinoline blue .

All of these isochromic plates , however, required a yellow disk to be switched on during the recording in order to weaken the blue light that was too strong. Hermann Wilhelm Vogel overcame these shortcomings by introducing eosin silver as an optical sensitizer. Through his and Johann Baptist Obernetter's efforts, the Eosin silver plates were created , which are distinguished from the conventional color-sensitive drying plates by their significantly higher sensitivity. Only when taking pictures of paintings do they sometimes need a yellow disc (with bright blue tones), with landscapes, portraits, etc.

Panchromatic sensitization forms the basis for every color photograph .

The development of color films was possible on the basis of panchromatic material and color filters.