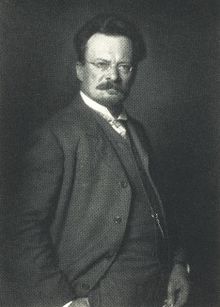 Adolf Miethe around 1905 on a photograph by Nicola Perscheid .

Adolf Miethe grew up in a middle-class family. His father was a chocolate manufacturer and city councilor in Potsdam.

Study and start of career

After graduating from high school, which he passed at the Viktoria-Gymnasium, he studied physics, astronomy and chemistry in Berlin and then in Göttingen, where in 1889 he received his doctorate with the thesis "On the actinometry of photographic-astronomical fixed star recordings" phil. received his doctorate . He had already gained practical experience in the field of astrophotography as an assistant assistant at the Astrophysical Observatory in Potsdam , where in 1887 he and Johannes Gaedicke invented the flash powder made from magnesium , potassium chlorate and sulfur antimony . After completing his studies, he took on various positions in the optical industry and became a research assistant at Edmund Hartnack's optical workshop in Potsdam, where he constructed microscope lenses . By introducing high-index crown glass into the front lens, he was able to achieve a greater working distance. After Hartnack's death in 1891, Miethe moved to Schulze & Barthels in Rathenow , a small town in Brandenburg world-famous for its optical industry , and developed telescopes and glasses for civil and military purposes there. During this time he also calculated, independently of Dallmeyer and Steinheil , the first telephoto lenses introduced into practice . In 1894 he changed his job again and went to Voigtländer & Sohn in Braunschweig , where he also devoted himself to various tasks in optics. Miethe took the position of technical director at Voigtländer after the company had been converted into a stock corporation. He is also working on improving telescopic sights , a job in which, as a passionate shooter, he was particularly interested.

After the death of Hermann Wilhelm Vogel , Miethe received an appointment as his successor to the chair for photochemistry, photography and spectral analysis at the Royal Technical University of Berlin on October 1, 1899 . This chair, which was the first of its kind in the world when it was established in 1873, offered Miethe extensive research opportunities in chemistry and physics.

The filters are pushed into a slide together with the glass plate to be exposed (separated here for the sake of clarity). After each exposure, a pneumatic mechanism (not shown) moves it down one image so that the next color separation can be recorded.

One of his most significant achievements in the field of photography was a contribution to color photography . He constructed a camera for "three-color photography according to nature", which was built by the Berlin cabinet maker Wilhelm Bermpohl . Its first public presentation took place in 1903 at the Royal Technical University in Berlin. In this process, a motif is recorded on three different black and white photo plates, each with a color filter plate in red, green and blue. From the recordings, positives are now made, which are projected through the same color filters through which they were recorded. A color image is created by cross-fading. The theoretically quite simple procedure was made difficult by a number of technical problems. One of the biggest problems was the correct tonal reproduction of the colors on the black and white plates. With the development of a panchromatic recording material, Miethe made a decisive contribution to color photography by discovering ethyl red as a panchromatic sensitizer .

The Russian photo pioneer Sergei Michailowitsch Prokudin-Gorski created color photos with such an interchangeable sled camera . a. 1908 by Leo Tolstoy and 1909 to 1914 by motifs across Russia. The photographers Eduard Kiewning , Bruno Marquardt and Robert Lohmeyer used the process between 1907 and 1909 to produce color photographs of the German colonies on behalf of a Berlin publishing house .

Miethe added a photographic observatory to the chair in 1909 and founded and directed the testing and research institute for cinema technology from 1921 , where he held the position of chairman of the board of trustees.

His great interest in astrophotography made him a participant in several expeditions, in 1908 he investigated twilight phenomena and the ultraviolet end of the solar spectrum on an expedition to Upper Egypt, in 1910 he accompanied Count Zeppelin's ship expedition to Svalbard , which mainly dealt with meteorological questions, but also explored the possibility of exploring the polar regions with an airship. He led the expedition to Norway to observe the solar eclipse of August 21, 1914 .

In 1922 Miethe became an honorary member of the Deutsche Kinotechnische Gesellschaft (DKG), a forerunner of today's television and cinema technology society .

Adolf Miethe died on May 5, 1927 in Berlin from the sequelae of an injury sustained in a train accident one and a half years earlier, from which he did not recover despite several operations.

In 1904, on behalf of the Cologne chocolate producer Ludwig Stollwerck, he delivered numerous natural color shots for the Stollwerck collector's album No. 7. This was the first book published in Germany using color photos according to the system developed by Miethe.

His diverse interests and extensive knowledge of the natural sciences made him active outside of photography. He also developed a process for the extraction of synthetic gemstones (corundum and spinels).

Adolf Miethe was the editor of several magazines and books and wrote around a hundred articles on photography. In 1889 he took over the editing of the Photographisches Wochenblatt and in 1894 founded the specialist journals Atelier des Photographen and Photographische Chronik .

Adolf Miethe held the title of " secret government councilor ". He has been the namesake of the Miethe Glacier in Antarctica since 1960 .

Rectors and Presidents of the Technical University of Berlin