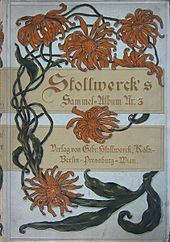 A scrapbook is called

The collection objects (eg stickers ( "stickers"), cards or trading cards) are either sold or product addition to goods such as candy bars or chewing gum. 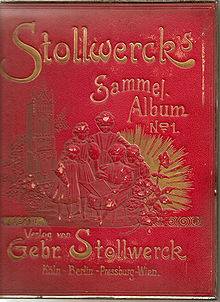 Stollwerck scrapbook No. 1, front side 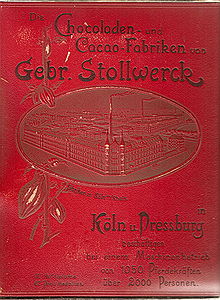 The idea of ​​using pictures to promote the sale of goods in Germany goes back to Franz Stollwerck (1815–1876), who was producing “picture chocolate” or “photography chocolate” as early as 1840. It can be assumed that Franz Stollwerck was inspired by the department store “Au bon marché” during his time as a journeyman in Paris, which gave the customers picture presents after shopping, which had a calendar and company advertising on the back and were intended to motivate them to buy again. The customers were so enthusiastic about this idea that Aristide Boucicaut, the owner of the department store, initiated the publication of a series of pictures.

Stollwerck pictures have been coveted collectibles since their creation around 1840 until today. Franz Stollwerck initially had pictures printed on the wrapping paper for the chocolate. One of the first still preserved chocolate packaging shows a series of pictures with the theme "The Cologne Cathedral under construction". In other series of images, "brave army leaders" from the Franco-German War 1870/71 were shown, in which Franz Stollwerck's sons Adalbert Nikolaus (1840-1883), Peter Josef (1842-1906) and Heinrich (1843-1915) took part. He is said to have published this series of pictures when his sons returned unharmed from the war.

Franz Stollwerck's son Ludwig Stollwerck (1857–1922) further developed the idea of ​​these single pictures into collector's pictures when he realized when he joined his father’s company in 1873 that the incentive to collect could increase the incentive to buy . From then on, the picture cards were produced in groups of six pictures and the advertising on the back was replaced by picture explanations in rhyme form.

In 1887 Stollwerck set up the first vending machine in Germany, the packaging of which each sample contained a Stollwerck picture. 18 million bars of chocolate were sold in vending machines in 1890 alone, each with a picture. Between 1896 and 1899, Stollwerck distributed more than 50 million advertising images annually in Germany alone.

For Ludwig Stollwerck it was difficult to obtain high-quality pictures and texts in sufficient numbers, since such a purely commercial form of advertising art was frowned upon among the artists . However, when he held a first competition in 1898, this changed quickly. Written out for submission by March 1, 1898 were drafts of 50 groups of six pictures of all areas belonging together in character, even in joking representations. The judges were professors Emil Doepler the Elder . J., Woldemar Friedrich , Bruno Schmitz and Franz Skarbina from Berlin as well as a partner in the Stollwerck company.

In the same year Stollwerck released the first scrapbook with the title “Stollwerck's Collective Album No. 1 ”out. The scrapbook was produced in the small format 23.5 cm × 29 cm and in the large format 26 cm × 37 cm. The large slip-in scrapbook contains series 1 to 31 with six pictures each.

The Kunstgewerbeblatt  11 from 1900 reports on the results of a competition by the Stollwerck brothers that 86 designs were submitted. The judges decided on June 18, 1900 not to award a first prize. The designs “Alaaf Köln” by Fritz Helmuth Ehmcke from Berlin and “Märchen (No. 52)” by Ernst Neumann from Munich were awarded a second prize (300 marks) . Third prizes (200 marks) went to Adolf Höfer and Walter Püttner from Munich for the design “Sophie”, to Maximilian Liebenwein from Burghausen for “Kater Murr” and to Karl Hölle from Hamburg for “Blue and Yellow”.

The circle of authors and writers for the literary design of the collector's pictures included the directorate Joseph Lauff , the zoologist Paul Matschie , the writer Hans Eschelbach , the journalist Julius Rodenberg , the poet Carl Hermann Busse , the novelist Gustav Falke , the poet Anna Ritter and many others more.

Ludwig Stollwerck later had well-known painters such as Adolph Menzel , Max Liebermann , Walter Leistikow , Hans Baluschek and Franz Skarbina as well as many artists specializing in certain motifs such as the marine painter Willy Stöwer work for himself. In addition, a new color printing process aimed to be as true to the original as possible.

The collector's pictures of this time offered a colorful variety of topics and motifs. Numerous series with depictions of fairy tales and legends , distant countries, landscapes, plants and animals, historical topics as well as sports, games and circus were published.

The first Liebig pictures appeared in Paris around 1875 as a supplement to the product packs of Liebig's meat extract. The systematic collection of images began around 1890, supported by scrapbooks specially offered for this purpose. In addition to many other topics, the series of images dealt with geographic, natural history and historical topics and conveyed ideas about the world outside of one's own horizon of experience, supported by explanatory texts and an appealing design.

The image of cigarettes dominated between the wars

Collective pictures reached their peak in the period between 1900 and 1910. Cheaper printing techniques ultimately led to a mass product known as the cigarette picture . The associated albums changed from the previously common slip-in albums to stick-in albums. In addition, the albums were now mostly dedicated to a specific topic. The scope of topics was greatly expanded during this time; In addition to sports albums of all kinds, for example, films and actors, fashion, nature, flags and uniforms, technology and traffic, the World War, but also folk songs and national costumes were objects of the collection.

This trend continued into the 1930s. Scrapbooks were now often provided with a lot of text and very cheap (prices around 1 Reichsmark). The editions of the albums ran into the millions, those of the pictures even into the billions. Examples of this are the “Moden Almanach” and the “Folk Costumes” album by Haus Neuerburg as well as the albums “Aus Wald und Flur - animals of our homeland” and “Märchen der Völker” published by the Hamburg-Bahrenfeld ( Reemtsma ) cigarette picture service , the latter artistically valuable, withdrawn from circulation in 1939 and replaced by "German fairy tales".

In the early 1950s there were popular scrapbooks from Margarine-Union AG Hamburg with the famous " Sanella pictures". Similarly, the Peter Kölln KGaA, Elmshorn, added oat flake pictures to the individual oat flake packs. The pasta manufacturer Birkel also had collector's pictures on the subjects of “Stone Age” and “Future Technology” in its program; the albums for this were available for purchase.

For the points acquired with the purchase of the publisher's novels and magazines, the “Pabel Bilderdienst” offered series of images for albums such as “Football Kings from yesterday and today” or “Men, Cars and Records” (1964).

From 1965 to 1980, the paper bags with two or three self-adhesive pictures (5.5 cm × 7.5 cm) for 10 Pfennig from the Munich company Americana were very popular. There were at least 50 different series, including scrapbooks on cars, westerns, motorcycles, films, airplanes, and Laurel & Hardy and Pinocchio comics. The albums printed in Italy were given away as unsalable promotional copies or sold for 50 pfennigs. Missing pictures (maximum ten) could be requested by post from the Americana picture service for 10 pfennigs each.

From 1961 to 1984 the market was shared with the Bergmann company from Dortmund / Unna, which mainly concentrated on the automotive and soccer sectors.

In 1979 the Panini Verlag from Nettetal (represented with a few albums in Germany since 1970) pushed more and more onto the market and released its first Bundesliga album. From 1984 almost all other collectible picture publishers were pushed out of the market. Panini's range includes stickers for the Bundesliga , soccer world championships and European championships as well as for films, superhero comics and Disney. Today the company is increasingly focusing on collectible pictures for children.

From 1989 there were also albums from the Topps company , which are sold under the “Merlin” brand. This company relies on its draft horses Star Wars , Lord of the Rings , Pokémon and Yu-Gi-Oh and from 2009 on the marketing of the collector's picture rights to the Bundesliga . Since 2007, the Italian toy manufacturer Giochi Preziosi has been releasing more albums in Germany. The pictures from this manufacturer are mostly high-resolution glossy photos on adhesive transfer film.

Other manufacturers of stickers in recent years are DS Italy, Upper Deck , Prominter, Baio, Diamond, Edibas, E-Max, Futera and, in the 1990s, Euroflash.

The Coupon collector's problem deals with the question of how many collector's pictures have to be bought in order to fill a scrapbook completely.

Collective pictures necessary until the scrapbook is completely filled. For example, an average of 4828 collection pictures are required to fill the Panini football collection album for Euro 2016 with = 680 pictures. This corresponds to an expected cost of around 678 euros.