Georg Bruno Schmitz (born November 21, 1858 in Düsseldorf , † April 27, 1916 in Berlin ) was a German architect of eclecticism . He achieved worldwide recognition in particular through large-scale monument buildings . 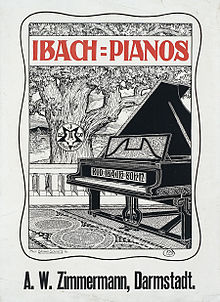 Schmitz was born as the son of the clothes maker and cloth merchant Carl Theodor Schmitz (1826–1877) and his wife Henriette, b. Rodenberg (1832–1868) was born in Flinger Strasse 6 in the old town of Düsseldorf . He received his training after attending the Royal High School in the years 1874–1878 at the Düsseldorf Art Academy , where he turned to architecture in Wilhelm Lotz's “building class” . He then worked for four years in the studio of the architect Hermann Riffart , who at the time planned and managed the new building for the Düsseldorf Art Academy . Schmitz also attended lectures as well as nude and anatomy courses at the art academy. Schmitz also worked in other studios, for example for Giese & Weidner in the construction of the Düsseldorf art gallery , for Julius Carl Raschdorff in the construction of the state house of the Rhine Province and for Kyllmann & Heyden in the construction of the Johanneskirche in Düsseldorf .

On November 1, 1881, the company "van Els & Schmitz" was established by Otto van Els and Bruno Schmitz and entered in the commercial register in 1882. The company headquarters was in the Pempelfort district at Rosenstrasse 26, until the office building was completed at Schadowstrasse 17 .

From 1883 he took part in several competitions . He was awarded 1st prize in the competition for the Vittorio Emanuele monument in Rome ; however, it was built by another architect. Schmitz received the 1st prize from the piano manufacturer Ibach for the design of a piano case . Schmitz received another first prize for the design of an "Kaiserforum" in the first competition for a Kaiser Wilhelm national monument ; this design was not implemented either. From 1886 Schmitz lived and worked in Berlin .

In Indianapolis (USA), the Soldiers 'and Sailors' Monument was built from 1888 onwards, based on a design by Schmitz. The sculptors Rudolf Schwarz (1866–1912) and Nikolaus Geiger (1849–1897) were involved in the execution of the monument. In the 1890s, three of the most important Kaiser Wilhelm monuments were created according to Schmitz's designs: the Kyffhäuser monument , the monument at the Deutsches Eck in Koblenz and the Kaiser Wilhelm monument at Porta Westfalica . On the occasion of the inauguration of the Kyffhäuser Monument in 1896, Schmitz was awarded the Prussian Red Eagle Order IV class.

On January 31, 1897, the constituent assembly of the Committee for German National Festivals met in Berlin under the direction of Wilhelm Böckmann , which discussed a new festival for the German people. It should be a combination of championship of Germany and national festival, analogous to the Olympics of the Greeks. The words fighting games and pilgrimage were also used in the argument. Wilhelm Böckmann had previously visited the newly erected Kaiser Wilhelm monument in the Kyffhäuser Mountains. Other participants suggested Berlin, Leipzig or Eisenach. In the end, however, the decision was made in favor of the Wolwedatals next to the Kyffhäuser monument. In 1898 Schmitz received a large gold medal at the Great Berlin Art Exhibition .

Outline drawing for the Völkerschlachtdenkmal , illustration in the magazine Die Gartenlaube , 1897

Bruno Schmitz, who won the architecture competition for the Kaiser Wilhelm monument, was commissioned to draw up sketches for the national festival site that is now to be built in the immediate vicinity . The plan was to use space in the Wolweda valley of around 550 by 370 meters, 300,000 to 400,000 seats, a water area of ​​around 10 hectares and the connection to the Kyffhäuser monument. Sports clubs, but also choral clubs, should make suggestions. Rowing, cycling, swimming and gymnastics were considered as sports. The project was not implemented. Even a later proposed smaller variant (above Kelbra ) did not get beyond the planning phase.

For his friend Emil Jacobsen he designed the so-called Havelmüller Villa in Berlin-Tegel, Gabrielenstrasse 70, in 1899 , which was demolished in 1975.

From 1899 Schmitz was a judge in several competitions for the design of scrapbooks for Stollwerck collectibles , including the cover of scrapbook number 3 together with Justus Brinckmann , architect Wilhelm Emil Meerwein and painter Julius Christian Rehder from Hamburg.

The Völkerschlachtdenkmal in Leipzig , completed in 1913, was the highlight of Schmitz's work.

In 1905 he received an honorary doctorate from the Technical University of Dresden .

Bruno Schmitz married the singer Lucia Wanda Genelli (a granddaughter of the graphic artist Bonaventura Genelli ). The first daughter Gabi was born in 1892 and the second daughter Angelika on August 6, 1893. She later became known as the sculptor Gela Forster and wife of Alexander Archipenko .

Schmitz was embroiled in one of the most prominent adultery scandals in the German Empire through his wife and friend Otto Hammann , press officer at the Foreign Office . The marriage ended in divorce in 1902.

In his second marriage he married the soprano Hedwig Schweicker .

Schmitz was a member of the Freemasons Association .

Although Bruno Schmitz as an artist had also designed mausoleums , for example , in his will he decreed a simpler type of burial for himself, in which his ashes were to be thrown into the Rhine . This last wish was not fulfilled due to German law, his ashes were instead buried in the Kyffhäuser monument at the instigation of Wilhelm II . When the room in which a sandstone box with its urn was placed on a stele was to be redesigned by the sculptor Martin Wetzel in the 1960s according to the ideas of the GDR , the urn was moved to a cellar room; the sandstone box was converted into a flower pot. Relatives who missed the urn were able to bring it into their possession in the 1980s through the Commercial Coordination of the GDR Foreign Trade Ministry and to the West, where it was buried again in the North Cemetery in Düsseldorf.

In the 1930s, a street was named after him in a small settlement in Leipzig-Paunsdorf (at Sellerhäuser Friedhof). In the 1960s, his hometown Düsseldorf named a street in the growing Garath district after him.

Oranienplatz and bridge with candelabra and other design elements by Bruno Schmitz, postcard around 1906