The Friedrichstrasse is located in the Berlin districts of Mitte and Kreuzberg . It is one of the most famous streets in the historic center of Berlin and was named after the Elector Friedrich III. named by Brandenburg . He ruled from 1688 to 1701 as Friedrich III. and from 1701 to 1713 as Friedrich I , "King in Prussia ".

Kochstraße on the corner cooking , Friedrich and Rudi Dutschke Strasse

The relatively narrow 15-17 meters Friedrichstrasse is the main traffic connection of Friedrichstadt in north-south direction. It begins at the Oranienburger Tor , the intersection with Hannoversche Strasse and Torstrasse . It crosses the Spree on the Weidendammer Bridge , crosses the Stadtbahn at Friedrichstrasse station and, further south, the Unter den Linden boulevard . At the former Allied border crossing at Checkpoint Charlie , it changes to the Kreuzberg district and ends after 3.3 kilometers at Mehringplatz .

Since the early 1980s, there were plans to expand Friedrichstrasse again into an urban boulevard. A new town square was to be built (approximately at the level of the theater ). There were also plans to build on the small square on the corner of Unter den Linden (in front of the Hotel Unter den Linden ). In 1987 the grand hotel between Unter den Linden and Behrenstrasse was opened. In the same year the construction of the Friedrichstadt Passage between the Französische and the Mohrenstrasse began . After reunification , the shell structures that had been erected up to then were demolished in 1992 and the three parcels with the Galeries Lafayette department store (Quartier 207) and the two commercial buildings Quartier 206 and Quartier 205 were built on by 1996 . At this point in time and afterwards, numerous spacious new commercial buildings were built in the area between Friedrichstrasse station and Leipziger Strasse . In this area there are several “quarters” of luxury shops, representative offices of well-known - especially high-priced - clothing brands and showrooms of car manufacturers such as the Volkswagen Group , Mini and Opel . The Dussmann cultural department store is also located there .

The street is home to the garden area of ​​the former Kunsthaus Tacheles , the Friedrichstadt-Palast and the Admiralspalast (1955 to 1997: Metropol-Theater ). The station at the intersection of the light rail with the underground north-south S-Bahn is known with the former Palace of Tears as a former border station to West Berlin . To the south of it follow the 25-storey International Trade Center (built in 1978) and the Maritim proArte Hotel , the former Interhotel Metropol .

Less known than the northern and middle section is the southern end of Friedrichstrasse towards Mehringplatz and Hallescher Tor . There is a pedestrian zone with various shops in part of the Kreuzberg neighborhood . A monument made of labeled floor slabs, the path of the visionaries , is intended to promote European understanding and make this area of ​​Friedrichstrasse more attractive for visitors.

In order to be able to better memorize the cross streets (from north to south from Unter den Linden ), the following donkey bridge has spread since the 1920s :

Creation of a new road system

Street scene with the Kaisergalerie , 1875 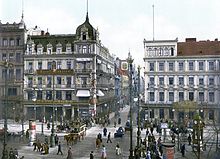 At the end of the 17th century, fields, meadows and fields stretched around the now very busy street, and ships were built and pastures were processed on the banks of the Spree . The construction of what was then the Berlin suburb began with the sale of electoral fields to those willing to build and the granting of numerous concessions: streets were marked out in regular rectangles, the new town was created - after its initiator Dorothea Sophie von Schleswig-Holstein-Sonderburg-Glücksburg , the second wife of Friedrich Wilhelm, later also called Dorotheenstadt .

The second most important street in this new development after the street Unter den Linden was the large cross street, which was also called simply that. At that time it reached from the Weidendammer Bridge to Behrenstrasse and was built on with two to three-story row houses; On the farms there were stables for livestock (pigs and cows) and fireboxes. Since there was still no sewer system in Berlin, all kinds of waste bothered residents and walkers.

Elector Friedrich III. appointed a commission to develop the new district, and by electoral order he decided to rename the cross street with the words: “What does cross street mean here? It has to be a decent name - mine. ”After this change, the road was extended to the south by buying more land. Architects have now also been entrusted with the construction of further houses, mainly Walter Nehring and the Smid company. By 1695, 300 houses belonged to the district that was given the name Friedrichstadt . It was mostly the Huguenots who moved to this area , who increased the prestige of the ruling house and the city of Berlin through their high level of craftsmanship. After the death of Friedrich III. Friedrich Wilhelm I took over the rule of Brandenburg and pushed the expansion of Friedrichstadt, even with military force. As a result, the southern Friedrichstrasse could be extended to the Hallesches Tor and the northern part to the Oranienburger Tor in the early 1830s.

The street section north of the still wooden Weidendammer Bridge had a village character for a long time, and the street was not called Friedrichstrasse, but Dammstrasse . For this purpose, four-storey barracks were built for the Second Royal Hussar Regiment , offices and the first factories were set up.

Friedrichstrasse between 1800 and the end of the Second World War 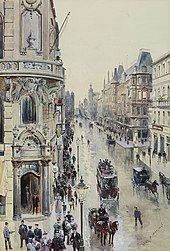 View from Taubenstrasse onto Friedrichstrasse ,
watercolor by Wilhelm Georg Ritter , 1896

During the March Revolution in 1848, Friedrichstrasse, especially the junction with Jägerstrasse , was also a scene of history: barricade fights took place, as a result of which the royal military was forced to withdraw from the city. A memorial plaque at Friedrichstrasse 180 commemorates the events today.

In the 19th century, the section between Weidendammer Bridge and Hallesches Tor gained in importance: expensive hotels, restaurants and artist establishments set up here and attracted guests. A long-standing vacant lot, where the Hotel Monopol had previously stood, directly on the north side of the Friedrichstrasse train station (house number 100), housed the Franziskaner restaurant from 1927 to 1945 . This beer and wine bar was furnished and operated by Ernst Barthels with up to 2500 seats until it was destroyed by a bomb at the end of the Second World War. In 2008 the area was sold to an investor who had a new hotel and office building built here. During the construction work, the basement and foundations of the former premises came to light. At the turn of the 20th century, Friedrichstrasse was considered a trading center for precious stones and gold and was a center of prostitution .

With the construction of the railroad to and from Berlin and the associated construction of the Friedrichstrasse station in 1882, the outstanding importance of this street for life in Berlin was finally “sealed”. All pictures and photos from the beginning of the 20th century show a crowded and lively street, which is densely built up.

The junction with Unter den Linden became one of the busiest in town at the beginning of the 20th century. Countless horse-drawn trams , cabs , motor vehicles, handcarts, omnibuses, cyclists and pedestrians shared the street. There were no traffic lights or other organizing aids yet. A first traffic policeman was needed, who tried to direct traffic with a whistle and arm movements. Before the Second World War, the intersection with Leipziger Strasse was also considered to be a very busy junction.

In July 1918 the philosopher Martin Heidegger reported to his wife about his experiences in Berlin and also mentioned Friedrichstrasse:

“Such an air of artificially high-bred, meanest, and I would not have thought the most sophisticated sexuality possible, but I already understand Berlin better - the character of Friedrichstrasse has rubbed off on the whole city [...] The people here have lost their souls. "

Reconstruction from 1945 and consequences of the division into four sectors

Friedrichstrasse at the Stadtmitte underground station (1959).

After the destruction in World War II, the debris removal and reconstruction work began in the GDR .

The House of Czechoslovak Culture (1955) and the House of Polish Culture (1956) with function rooms and shops for books, records and articles typical of the country were built in the form of a pavilion on the corner of Friedrichstrasse and Am Weidendamm . Both moved to other locations in 1978 and 1972 respectively.

An apartment block with shops on the ground floor was completed in 1966 under the lime trees on the corner of Friedrichstrasse (old Kranzler corner). In 1987 the Grand Hotel was opened here. The Lindencorso was inaugurated in 1966 on the site of the former Café Bauer . The building stretched from Unter den Linden to Rosmarinstrasse. Various catering facilities were housed in the lower area, and offices were located on the upper floors. The terrace of Café Espresso faced Friedrichstrasse, and in front of it was an open space with a fountain and flowers. The Hotel Unter den Linden (also completed in 1966) was built on the northeast corner of the intersection, roughly at the site of the old Café Viktoria. The building was set back a little from Friedrichstrasse, creating a small square.

The International Trade Center was built near the S-Bahn station from 1976 to 1978 . The House of Soviet Science and Culture on the corner of Jägerstrasse was opened in 1984, as was the Friedrichstadt-Palast . In the buildings of the 1980s, postmodern , historical and modern elements were used.

The Berlin Wall divided Friedrichstrasse. The Mehringplatz as its southern end was redesigned from 1968. The historic road connections to Lindenstrasse and Wilhelmstrasse were interrupted. From 1966 to 1975, the Mehringplatz was built using modern means. As part of the International Building Exhibition in 1984 , parts of West Berlin's Friedrichstrasse were to be repaired in terms of urban planning. The house at Checkpoint Charlie and the Koolhaas house at Checkpoint Charlie were built on the corner of Kochstrasse . 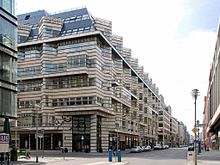 After the political change , some city quarters were rebuilt, including the quarters 205, 206 and 207 ( Galeries Lafayette ) known as Friedrichstadt-Passagen . An American Business Center projected on the site of the former border crossing in 1992 was only partially completed. Of the five planned buildings, three were built, including the Philip Johnson House . The last vacant lots were closed by 2010, including at the Spreedreieck and at the Unter den Linden intersection on the site of the former hotel Unter den Linden.

In the southern area, Friedrichstrasse ends as a pure pedestrian zone on Mehringplatz , whose semicircular shape, including the social housing built in the late 1960s, is only slightly reminiscent of the earlier development on Belle-Alliance-Platz , which was completely destroyed in World War II. Friedrichstrasse ends here at number 246.

Currently (as of 2019) there are some challenges for the economic development of Friedrichstrasse.

Buildings and monuments in Friedrichstrasse 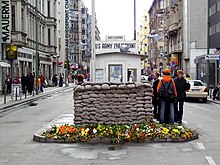 Replica of the border barracks at the former Checkpoint Charlie checkpoint

(From north to south)

Personalities who lived or worked in Friedrichstrasse

(Information in chronological order with the respective house numbers)