The Metropol Theater was opened in 1898 by Richard Schultz at Behrenstrasse 55-57 (part of what is now the Komische Oper ) and served the well-paid Berlin bourgeoisie and the nobility as a musical entertainment establishment. The theater building was highlighted as a landmark in the Berlin address book with the following description: “The theater built by Fellner and Holmer and furnished with great luxury; In the front it shows a sandstone facade richly decorated with figures and ornaments . It holds around 2600 people. The so-called Lindengalerie, which runs through the entire building, connects Behrenstrasse with Unter den Linden. "

The program included revues and other works by the light muse with well-known artists such as Lizzi Waldmüller , Richard Tauber and Fritzi Massary . At that time, composers such as Paul Lincke , Jean Gilbert , Rudolf Nelson and Victor Hollaender provided the music for the Metropol-Theater .

The metropolis experienced its first economic crisis during the inflation in the early 1920s . The Vossische Zeitung reported in January 1921: “The Metropoltheater closed its last financial year with a deficit of around 350,000 marks [adjusted for purchasing power in today's currency: around 98,000 euros]. As our Viennese correspondent has now informed us, the theater is likely to be taken over by the Castiglioni Group , which has already bought a number of theaters in Vienna, Warsaw and Milan. "

In the Roaring Twenties, the Metropol Theater developed into a world-famous operetta stage, which also played new types of music from the USA with guest ensembles. But another bankruptcy came as a result of “ Black Friday ” of 1929, when the first global economic crisis began. The directors now changed very often; most recently Fritz Friedmann-Frederich headed the theater from 1928 , who had already become artistic director and chief director of the theater in 1919. He relied on light muses and big names like Käthe Dorsch and Richard Tauber . Another bankruptcy ensued in 1933 when the Fritz and Alfred Rotter theater company collapsed.

During the time of National Socialism , the Metropol-Theater continued to operate as before, except that Jewish ensemble members, as on all German theaters, were no longer allowed to perform. The theater's program was non-political due to the genre being played , so that there were no noteworthy reprisals by state power. The Nazis recognized this entertainment culture as useful for their purposes. Werner Schmidt-Boelcke was the first conductor here from 1934 . A new generation of young composers, now forgotten, took the place of the old ones, such as Fred Raymond with the operettas Ball of Nations and Mask in Blue and Ludwig Schmidseder with the operettas Die or Keine and Frauen im Metropol . The Metropol-Theater slowly lost its old, almost feudal luster, and the impending Second World War , unlike in 1914, depressed the mood of those looking for entertainment. At the end of 1944, after the premiere of Will Meisel's revue Wiedersehn machtjoy, the theater was closed due to the Allied air raids on Berlin .

In March 1945, bombs destroyed the theater on Behrenstrasse, except for the auditorium, which was preserved and was used by the Komische Oper from 1947 .

In the newly founded GDR , the Metropol-Theater was rebuilt, now housed in a hall of the Colosseum cinema on Schönhauser Allee . Franz Lehár's operetta Paganini was the first post-war premiere.

In 1955 there was a move to the Admiralspalast , which then remained the domicile until the end of 1997. In addition to performing classical operettas were also known in the program Broadway - musicals such as My Fair Lady , Sweet Charity , Annie Get Your Gun , Kiss Me, Kate , Hello, Dolly! (with Gisela May ) and Cabaret , but also works specific to the GDR, such as Messeschlager Gisela or Mein Freund Bunbury .

The Metropol-Theater thus advanced to become the leading light music stage in the GDR, thanks in particular to its long-time director Hans Pitra .

The climax of the theoretical and practical efforts to create cheerful music theater in the GDR was a festival week in 1974, which Kurt Damies played a key role in initiating. Damies, head dramaturge of the Metropol-Theater from 1960 to 1993, as well as the dramaturges Otto Schneidereit and Rainer Northmann tried to combine the old operetta tradition with the development of GDR-specific forms of operetta and musical. 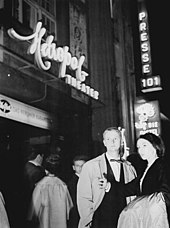 The more modern Friedrichstadtpalast , which was reopened in 1984, initially did not compete with the Metropol-Theater, it was primarily used to present elaborately staged, personnel-intensive music revues, shows and guest performances.

After the death of Hans Pitra, Gerd Natschinski took over the management of the house from 1978 to 1981. He was followed by Peter Czerny until 1990 . Werner P. Seiferth then served as artistic director until 1996.

From 1955 to 1984 the Metropol-Theater was also the venue of the Berlin Symphony Orchestra .

After the political change , the Metropol-Theater got into financial difficulties, caused by the subsidy policy of the Berlin Senate , which set different priorities in the cultural field in favor of the three opera houses.

Several investors who wanted to take over the house (u. A. A group led by the former director of the Deutsches Theater in Munich , Kurt Plapperer ) were rejected because the Senate was basically not willing to continue subsidizing the Metropol Theater and the listed historic buildings of the Admiralspalast to renovate. The last directorship under the singer René Kollo failed in 1998, the ensemble was dissolved.

The dead live longer: a new beginning in 2006

After a few uncertain years, the Senate decided to keep the house as a cultural location and put it up for sale. Falk Walter , operator of the Arena Berlin , became the owner together with four other shareholders. The new owners had the entire building complex renovated inside and out in accordance with historical monuments and opened the new Admiralspalast Theater on August 11, 2006 with the premiere of Brecht's Threepenny Opera . Further rooms are a studio stage and concert and gallery rooms 101 . The operetta / musical tradition and the light muse have been revived at the historic location since 2006.

Overview of the performances offered since 2006, mostly by guest ensembles: