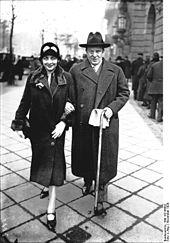 Richard Tauber was the illegitimate child of the soubrette Elisabeth Denemy (widowed after Karl Seyfferth) and the converted Jewish actor and Chemnitz opera manager Richard Tauber . The house where he was born was the Hotel Zum schwarzen Bären in Linz. The entry in the baptismal register was Richard Denemy . The legal status and name were changed in 1913 as a result of the father's adoption . Due to his mother's profession, Tauber grew up with foster parents in Linz and also attended elementary school there. Richard Tauber was a Roman Catholic from birth (baptized in Linz), his mother was Roman Catholic and his father had converted to the Roman Catholic faith as a teenager. Tauber saw himself as a Catholic and did not understand all his life that he was persecuted by the National Socialists just because his paternal grandparents were practicing Jews.

In 1903, at the age of twelve, Tauber moved to his father in Wiesbaden and attended grammar school there for the next five years. He then studied piano and composition from 1908 to 1910 at the Hoch Conservatory in Frankfurt am Main . Conducting was added later. Thanks to the recommendation of his lecturers, Tauber became a student of Carl Beines in Freiburg im Breisgau between 1911 and 1912 and was trained in singing. There he was able to make his public debut on May 12, 1912 as a soloist with the choral society "Concordia".

Almost a year later, on March 2, 1913, Tauber sang in an opera for the first time. He made his debut at the Chemnitz Theater as Tamino in Die Zauberflöte ( Mozart ). That year his father adopted him; officially he was now called "Denemy-Tauber", but only called himself "Tauber". End of 1913 got Tauber at the opera in Dresden an engagement as Royal Court opera ; he only ended this contract in 1918.

During this time Tauber sang "Max" in Der Freischütz ( Carl Maria von Weber ), "Mathias" in Der Evangelimann ( Wilhelm Kienzl ), "Alfredo" in La traviata ( Giuseppe Verdi ) and many more. Between 1919 and 1920 Tauber moved from the Berlin State Opera to the Volksoper Vienna and back again. In 1921 he appeared for the first time in an operetta by Franz Lehár ; he sang in the gypsy love in Salzburg . These many guest performances abroad led to a rift in Dresden, so that Tauber resigned there and went to Vienna.

Between 1922 and 1925, Tauber made a name for himself as a brilliant interpreter of Mozart operas and his friend Franz Lehár wrote the tenor parts for him in many of his operettas. During this time Taubers began regular engagements at the Salzburg Festival . In 1922 he was seen and heard as Don Ottavio in the first opera performance of the Salzburg Festival . In 1926 Tauber married the Hamburg soubrette Carlotta Vanconti , whom he had known for two years. After two years of marriage, the couple separated and were divorced in 1928. This divorce made headlines when it became known that Vanconti had been settled with a million marks; the daily press called Vanconti “a soubrette on the outside and a crocodile on the inside”. 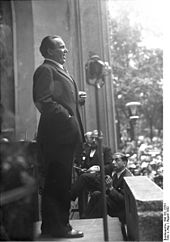 Richard Tauber sings in a charity matinee for the Artists' Aid in Berlin Zoo, recording by Georg Pahl from August 1932 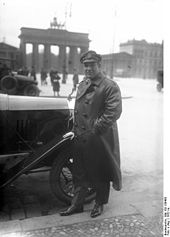 Richard Tauber in front of the Brandenburg Gate in 1932

With the song " Your is my whole heart " from the operetta The Land of Smiles (Franz Lehár), Tauber became a world star almost overnight. The amazing thing is that he was hardly able to rehearse for it, as he spent weeks on a cure in Bad Piešťany due to a rheumatic attack .

Although financially troubled by the divorce, Tauber founded the Richard-Tauber-Tonfilm-Gesellschaft and went bankrupt in 1931. In 1930/31 Tauber got his first engagements in London and New York .

In 1933 Richard Tauber was attacked in front of the Hotel Adlon in Berlin by an SA troop with the words "Judenlümmel, out of Germany" and put down. Actually, Tauber wanted to emigrate immediately, but stayed to work on his operetta The Singing Dream . He dedicated the song “You are the world for me” from this piece to his tenor colleague and friend Joseph Schmidt . The following year it was premiered in Vienna.

At that time he lived with the singer Mary Losseff . His relationship with her began while he was still married to Carlotta Vanconti and tragically ended when his beloved was alcoholic.

In 1935, while filming Heart's Desire , Tauber made the acquaintance of British actress Diana Napier and married her the following year. But this relationship too did not last; the couple went their separate ways during the war. In 1938, after Austria was annexed to the German Empire , Tauber went on a world tour and emigrated to Great Britain.

Throughout the Second World War , Tauber stayed in Great Britain and appeared in many cities to look after the troops. In 1940 he was granted British citizenship . He has worked on various occasions as a conductor with the London Philharmonic Orchestra . In 1941 Tauber celebrated another premiere in London with his operetta Old Chelsea . The official criticism gave him the name "The Man with the Monocle" because of his appearance.

In 1946 Tauber gave a farewell concert in Zurich (a recording of the radio broadcast has been preserved) and devoted himself almost exclusively to composing and conducting for the next two years. During this time he was already living with Esther Moncrieff . On September 27, 1947, Tauber gave his farewell performance on stage. He sang “Ottavio” in Don Giovanni (Mozart) in London with the ensemble of the Vienna State Opera under the direction of Josef Krips . A major Australian tour that Tauber had already planned was played in his place by Rudolf Schock in 1949 .

At the end of 1947 Tauber was operated on in Guy's Hospital in London and died there a few weeks later at the age of 56 from the effects of his lung cancer . Richard Tauber found his final resting place in a grave of honor for the City of London at Brompton Cemetery ( Kensington West). A memorial stone was set up in the Bad Ischl cemetery .

Despite his fame and considerable income, Tauber left tax debts of around 750,000 marks. His widow Diana Napier could therefore not pay for the funeral; she received support from Vera Schwarz and Marlene Dietrich, among others . On January 20, 1948, a memorial service for Tauber with over 7,000 participants took place in the Royal Albert Hall : At this benefit concert for the benefit of Tauber's widow, u. a. Elisabeth Schwarzkopf . 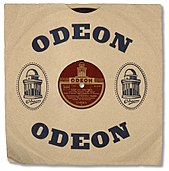 Greetings to my Vienna , recording from 1932. Richard Tauber was under contract with the then very well-known record brand Odeon