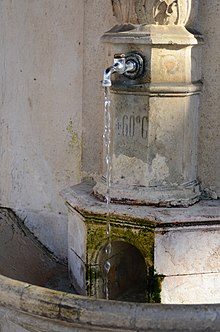 Piešťany ( pronunciation ? / I : [ 'pĭɛʃcani] ; German Pistyan or Pistian even Püschtin , Hungarian Pöstyény - until 1907 Pöstyén , Polish Piszczany ) is the largest city of the same name Piešťany District and a well-known spa in the west of Slovakia .

The town of Piešťany is located in the northern Danube hill country (in Slovak Podunajská pahorkatina , part of the Slovak Danube lowlands ) on the river Waag . The Dubová brook also flows through the town . Piešťany is flanked to the east by the Považský Inovec Mountains , while the Little Carpathians rise to the west . Immediately south of the city, the Waag is dammed in the Sĺňava reservoir.

The city consists of two parts, on the one hand the actual city Piešťany and on the other hand the place Kocurice , which was incorporated in 1974 and is located in the west on the other side of the highway.

The following information relates to the straight line distance to the nearest town center and the distances are commercially rounded to half a kilometer. Cities are highlighted in bold.

The first human settlements in the area of ​​today's city existed about 80,000 years ago, because the area has a very favorable climate. In addition, there was an abundance of thermal springs that did not freeze even in winter. 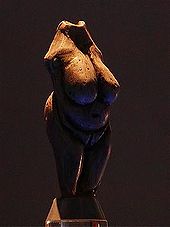 A small female figure (Venus von Moravany) was found in the town of Moravany nad Váhom ( Moravan ) not far from the city ; it was made of mammoth ivory and was made around 22,800 BC. It is now in the museum at the Bratislava Castle .

In the also nearby town of Krakovany- Stráže, a collection of luxury goods made of glass, bronze, silver and gold was found in three graves in an excavation site; these date from between 200 and 300 AD.

Piešťany was first mentioned in 1113 as Pescan . At that time it consisted of various small settlements. The healing springs were also used in the Middle Ages , a visit from King Matthias Corvinus is recorded .

The sources of Piešťany are first mentioned in the book De admirandis Hungariae aquis hypomnemation ("About the wonderful waters of Hungary") by the Kauschauer pharmacist, councilor and mayor Georgius Wernher (Georg Werner), which was first published in Basel in 1549 and in Vienna in 1551 has been. During the 16th and 17th centuries, the city, like many others in the region, suffered from the ravages of the Turks and the anti-Habsburg uprisings.

Over the centuries the place belonged to different noble families, the last one being the Erdődy family . They owned the area from 1720 to 1848, and the bath itself until 1940. The family had the first bath houses built in 1778, but they were badly damaged by the devastating flood of 1813. In 1820 the bath houses were expanded and rebuilt in the neoclassical style (Napoleon bath). A park was also created.

From 1889 to 1940 the bathing facilities were leased by the Winter family, and Ľudovít Winter in particular brought the bath to an international reputation by teaching the treatment methods (from 1840 there was a permanent bath doctor), but also the accommodation and leisure options, including through the construction new bathing facilities and hotels improved. While today there are numerous shops, bars, restaurants and the extensive city park on the right bank of the Waag, the health resort with the spa facilities and thermal springs is on the left side of the river. 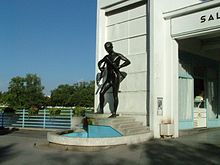 The colonnade bridge with the famous statue

In 1945 Piešťany was officially granted town charter. The large Sĺňava reservoir has existed in the south since 1959 ; the backwater of the water extends into the urban area. Despite the stagnation of the bathing industry after the nationalization of the baths in 1940, further bathing buildings (Balnea Grand, Balnea Splendid and Balnea Esplanade) were built in the 1960s and 1970s (by Scandinavian investors). All hotels are located on the spa island, which lies in the river Waag.

The city recently attracted attention after the capture of three members of the Real IRA on July 5, 2001 after they were lured into a trap by MI5 agents disguised as arms dealers from Iraq .

From September 12 to 13, 2008, a summit meeting of the Slovak President Ivan Gašparovič , the Hungarian President László Sólyom , the Czech President Václav Klaus and the Polish President Lech Kaczyński took place on the spa island . On September 12, 2008, they inaugurated the “Presidential Fountain” in front of the Irma-Bad. At the edge of the fountain, the names of the presidents are engraved on four metal plates.

Piešťany was one of Europe's leading rheumatism spas even before the First World War. The spa guests included u. a. Empress Elisabeth , Tsar Ferdinand I of Bulgaria and Kaiser Wilhelm II. The spa gained great popularity throughout Germany and Austria when Richard Tauber stayed in Bad Pistyan in 1929 on the recommendation of the silent film star Henny Porten . The famous tenor had been brought in completely paralyzed after an attack of gout; Vienna and Berlin newspapers reported almost daily on the patient's progress up to his healing.

Piešťany has sulphurous thermal springs at 70 ° C. The warm weighing mud is used against scoliosis, osteoporosis, arthrosis, rheumatism and gout. The Adeli method is also used in Piešťany. Piešťany is currently the only Adeli center in the world. Around 15 patients from all over the world are treated there monthly using this method. Today around 40,000 spa guests come to Piešťany every year.

Piešťany is 88 km northeast of Bratislava by car, or an hour's drive. The city of Trnava can be reached in 36 km (36 min.), The city of Nitra in 55 km (58 min.). Two bridges cross the river Váh : the Kolonádový most (literally colonnade bridge, only for pedestrians), which connects the center with the island of Kúpeľný ostrov , and the Krajinský most (literally the national bridge), a road bridge (national road 499).

The city is connected to both the Slovak railway network and the motorway network. Piešťany has its own connection to the D1 motorway . The city has a small airport , which at least currently (May 2019) does not offer any scheduled services.

From the train station in Piešťany, which is on the Bratislava – Žilina railway line , there are direct connections to: