Joseph Schmidt (born March 4, 1904 in Dawideny , Austrian crown land Bukowina ; † November 16, 1942 in the Girenbad internment camp above Hinwil , Canton of Zurich , Switzerland ) was an Austrian opera singer ( lyrical tenor ). Around 1930 he was one of the most famous singers in Germany. After he had to flee Germany as a Jew in 1933, he finally came to Switzerland, where he fell ill in a camp and died for lack of help. 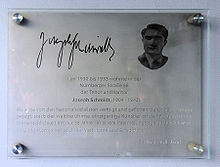 Memorial plaque on the house at Nürnberger Strasse 68, in Berlin-Schöneberg

Joseph Schmidt, son of German-speaking Orthodox Jews , grew up in Dawideny (located on Sereth, southwest of Chernivtsi ) and in Chernivtsi. His native Bukovina belonged to the Austria-Hungarian Empire and fell after the First World War in Romania ; In 1940 part of it came to the Soviet Union - the aforementioned places are now in Ukraine ; the village of Dawideny is called Davideni in Romanian . Schmidt sang as Chasan in the Israelitisches Tempel Czernowitz as a child .

From 1925 he studied singing at the Royal Music School in Berlin with Hermann Weißenborn . The globally successful Schmidt recorded numerous records and, discovered by Cornelis Bronsgeest , sang in 38 radio operas on Berliner Rundfunk between 1929 and 1933. Not only did his broadcasts add to the popularity of broadcasting, but he also became a celebrated tenor himself. Due to his small height of only 1.54 m, he was denied a career on the opera stage. Nevertheless, he was able to play the role of Rudolf in La Bohème in Brussels from January 1939 , followed by a tour of Liège , Ghent , Antwerp , Bruges , Kortrijk , Ostend and Verviers . Schmidt also gave a guest appearance as Rudolf in Helsinki in 1940 . He played this role 24 times within a year. As a further stage role he was supposed to sing Canio in Bajazzo , but the escalating politics prevented this project. Schmidt's last demonstrable appearance took place at the Avignon Opera on May 14, 1942.

After the seizure of power of the Nazis Schmidt sang on 20 February 1933, the last time in the German Broadcasting ( The Barber of Baghdad ). A week later he was denied access to the broadcasting house. After the premiere of his film A Song Goes Around the World on May 9, 1933, he emigrated to Vienna in December before the Nazis. He made a guest appearance in Palestine in 1934 , made his debut as a tenor in New York's Carnegie Hall on March 7, 1937, and gave individual concerts in Germany with the Jewish Cultural Association until 1937 . In 1938 he fled from Austria, now annexed, to Belgium , and in November 1940 to France . As a German he was interned by the Vichy government in the currently unoccupied zone of France, in La Bourboule .

Schmidt managed to escape to Switzerland in October 1942 after several unsuccessful attempts. He crossed the border alone and on foot. Weakened by the exertions, Schmidt collapsed on the street in Zurich, was recognized and taken to the Girenbad internment camp “to clarify the case” as an illegal refugee - according to a law of 1942, Jews who had fled in Switzerland were not considered political refugees . He applied for a work permit, which he was initially denied. After a short time he fell ill with a sore throat and was admitted to the Zurich Cantonal Hospital . Although the sore throat was treated there, they did not want to follow up on his evidence of severe pain in the heart area and refused a further examination. As officially cured, Schmidt was released from the cantonal hospital on November 14, 1942 and had to return to the Girenbad reception camp.

Two days later, Schmidt died of heart failure in the nearby Waldegg restaurant. One day after his death his work permit was available and he would have been free. 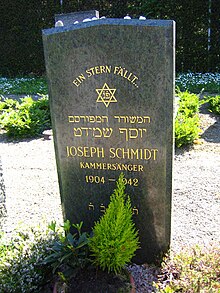 Joseph Schmidt is buried in the Israelite cemetery Unterer Friesenberg in district 3 in Zurich- Wiedikon . His gravestone bears in German the inscription A star falls ... Joseph Schmidt Kammersänger 1904–1942 , as well as the words hameshorer hamfurssam (“the famous singer”) in Hebrew , which also includes Schmidt's cantor activity. A memorial plaque is now attached to the restaurant where he died.

His estate administrator, the Swiss tenor Alfred Fassbind, wrote a comprehensive biography of the singer. It was published in 1992 by the Swiss publishing house under the title Traces of a Legend - A Song Goes Around the World . On the 70th anniversary of his death, a new, heavily revised edition was published by Römerhof Verlag in Zurich.

In 1958 Schmidt's life was filmed with the title A song goes around the world (The Joseph Schmidt Story) . Hans Reiser played the main role .

The music school in Berlin's Adlershof district ( Treptow-Köpenick district ) was named after Joseph Schmidt in 2004 . To mark the singer's 100th birthday, the Federal Ministry of Finance (Die Deutsche Post) issued a stamp worth 55 cents on March 11, 2004 . On July 4, 2007, a memorial plaque for Joseph Schmidt was unveiled at Nürnberger Strasse 68 in Berlin, where he lived until 1933. However, this post-war building has since been demolished and the board has since been presented in the entrance area of ​​the music school.

1977 in Berlin-Neukölln high-top settlement , the Joseph-Schmidt-Straße and 1995 in Vienna- Landstrasse (3rd district) of Joseph-Schmidt-Platz named after him.

Since January 22nd, 2008 the asteroid (168321) reminds Josephschmidt of the singer. The name was given at the suggestion of Markus Griesser , head of the Eschenberg observatory in Winterthur .

“Joseph Schmidt had one of the most beautiful lyric tenor voices of his time. In itself this voice was only small, but its enormous pitch and its nuanced, expressive presentation still deserve the greatest admiration on his numerous records. "