Hinwil is a political municipality and capital of the district of the same name in the canton of Zurich in Switzerland .

Half split and divided by silver and blue over gold

The community includes six outside guards : Girenbad , Hadlikon , Ringwil , Unterbach, Unterholz and Wernetshausen , as well as the hamlets of Bossikon and Erlosen . These external guards used to be partly independent communities, which is why most of them still have a coat of arms today.

On December 31, 2012, 42.85 percent of the population belonged to the Evangelical Reformed Church and 25.52 percent to the Roman Catholic Church . The Catholic Church of Liebfrauen was built by the architect Joseph Steiner in 1920 as a neo-Romanesque church. Between 1977 and 1978, the church was expanded by architect Walter Bosshart and converted into a modern church. The chancel was designed by Josef Caminada .

In Hinwil there is the Chrischona Free Church .

Germano Tezzele has been mayor of the community ( SVP ) since 2010 .

Historical aerial photo from 1929, taken from a height of 200 meters by Walter Mittelholzer

During restoration work in 1968, remains of walls from Roman times were found inside the Reformed church . The remains of a hypocaust suggest a Roman villa, the area of ​​today's Hinwil was therefore already inhabited in antiquity.

The first written name of Hinwil is Hunichinwilare and dates from the period 743-747. It is a deed of gift from a Landbert to the St.Gallen monastery . At that time there was probably a small Alemannic hamlet in the area of ​​today's village hill . Hadlikon is mentioned in 775 (as Hadaleihinchova ), Bossikon 829 (as Pozinhova ), Ringwil 837 (as Rimolteswilare ), Wernetshausen 867 (also Werinholveshusa ).

The Hinwil local museum was founded in 1925 .

The industrial quarter in Hinwil is the home base of the Sauber Motorsport Formula 1 racing team . The companies Belimo , Ferag and FBB (FBB Frischbeton & Baustoff AG) are located in the industrial quarter . One of the best-known Hinwil companies was Bührer Tractors , which had a renowned reputation throughout Switzerland. In Hinwil, too, industry is increasingly being displaced by the service sector, so today various large shopping centers are important employers in the region.

Hinwil is home to individual infrastructure facilities in the Zurich Oberland: the Zurich Oberland waste disposal facility (KEZO) , an association of 39 municipalities in the Oberland that jointly operate one of the six waste incineration plants in the canton; as well as the Hinwil test center, one of two subordinate test centers of the cantonal road traffic office ; The federal government maintains the Army Logistics Base (LBA) in Hinwil. The Bossikon-Hinwil sewage treatment plant is located in the industrial district. There are small businesses in the community center. 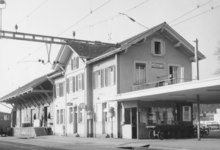 The community has been connected to the Swiss railway network through the Hinwil station since May 3, 1876, when the Effretikon – Hinwil railway was opened by the Effretikon – Wetzikon – Hinwiel (1876–1886) railway company. The railway company went to the Schweizerische Nordostbahn (NOB) on January 1, 1886 . On June 1, 1901, the Uerikon-Bauma-Bahn (UeBB) , which ran through the existing station, was opened.

The Uerikon-Bauma-Bahn was taken over by the Swiss Federal Railways (SBB) in 1948 and the Bubikon- Hinwil line was shut down. The Hinwil-Bäretswil line was closed for passenger traffic in 1969. The Hinwil – Bäretswil – Bauma section was retained and has been used by the Zurich Oberland Steam Railway Association (DVZO) since 1978 . Freight trains still run irregularly on the Hinwil – Bäretswil section, mainly excavation work for a concrete plant.

Hinwil station is connected to the S 14 Affoltern a. A. - Altstetten - Zurich HB - Oerlikon - Wallisellen - Hinwil every half hour. 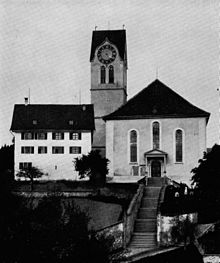 Reformed church in Hinwil including the former rectory.

The "Zwölfistein" is a 3-4 meter large conglomerate rock - boulder just above Wernetshausen in the municipality Hinwil. According to legend, the Zwölfistein is supposed to turn once every night when the bells of Basel Minster (according to others, the Hinwil Church) strike midnight.

The Bernegg ruin stands above the Wildbachtobel near Girenbad. The former castle was inhabited by the Knights of Bernegg in the High Middle Ages, but they sold the castle in 1273 due to lack of money and had to drag it down to the foundation walls. A castle stable can still be seen today. The remains were restored at the beginning of the 20th century on behalf of the Hinwil Antiquarian Society.

View from Benklenstrasse onto the western slope of the Bachtel

A popular destination is Hinwil's 1115 meter high local mountain, the Bachtel . From the 60 meter high Bachtelturm (viewing platform 30 meters high) you have a view over the Zurich Oberland to the Alps.

The Breite secondary school is in a central location near the cemetery. The Breite school facility has an indoor pool with an adjustable floor.