Bäretswil , in the Zurich German local dialect Bääretschwiil [ˌbæːrətʃˈʋiːl] , is a political municipality in the district of Hinwil in the Swiss canton of Zurich .

The municipal area are located next to the main town and the now greatly expanded former hamlet Adetswil, the outer Wachten Bettswil, Wappenswil, Tisenwaldsberg, Neuthal , courtyard, Hinterburg, fir, Ghöch , Fehr forest mountain and Kleinbäretswil and over a hundred individual farms. It covers an area of ​​2219 ha, of which 872 ha are forest (39%). In terms of area, Bäretswil ranks seventh among the rural communities in Zurich.

The municipality of Bäretswil borders in a clockwise direction on the municipalities of Bauma , Fischenthal , Hinwil , Wetzikon , Pfäffikon and Hittnau .

From the first tax collection by the people of Zurich, who used it to finance the city ​​of Winterthur , which was acquired in 1467, a figure of 45 households has come down to us for 1470. In 1629 the community lost over 60% of its population to the plague . Of the 1,244 inhabitants, only 494 survived. 100 years later, the population loss was balanced again. Between 1723 and 1771 the population more than doubled. The reason for this was the new earning potential through Heimtextil processing ( professionals ). Around 1810 the community had a proud 3,549 inhabitants, a number that was not reached again until the end of the 20th century.

The Ed 3/4 "Hinwil" on the Weissenbach Bridge in Neuthal

In 1901 Bäretswil was connected to the railway network ( Uerikon-Bauma-Bahn ), but in 1969 the railway ceased operations and was replaced by a Wetzikon - Bauma bus line . The former Hinwil - Bäretswil - Bauma railway line is now maintained and operated by the Zürcher Oberland Steam Railway Association .

Thanks to its fog-free location, Bäretswil has been a sought-after community since 1960. There was a lot of construction going on in Adetswil in particular. In 1990 there were 63% commuters among the employed, mainly to Wetzikon, Uster and the city of Zurich .

Historical aerial photo from 1922, taken from a height of 400 meters by Walter Mittelholzer 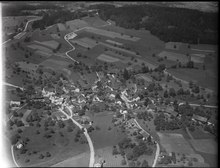 Emergency hiding places for Roman silver coins from the 1st to 3rd centuries have been found in Bäretswil . Perhaps one can deduce from this a pre-Alemannic settlement.

First documented evidence of Bäretswil is 741 as Berofovilare and 745 as Berolfeswilari . The place name means "at the Berolf homestead". The common names on -wil in this area indicate an Alemannic colonization from the 7th to 9th centuries. The St. Gallen Monastery has owned land in this area since the 8th century.

The Burg Greifenberg and the low court rights over Bäretswil were first the abbot of St. Gallen the counts of Rapperswil awarded. As Habsburg pledges, they passed to the Lords of Hinwil in 1321 , who held them until 1507. The border between the later Landvogteien Grüningen and Kyburg ran through the middle of today's municipal area.

The Bäretswil church was first mentioned in connection with the collection of the crusade tax in 1275. In 1827 a new building was built in the classical style. The collature was a fiefdom of the St. Gallen monastery and belonged to the Lords of Hohenlandenberg from 1279 to 1541 . In the late Middle Ages, the parish reached far beyond the Töss to the slopes of the Hörnli .

During the Reformation , the community joined this movement against the will of the then priest. Also Baptist had a long term presence: Their influence was from 1525 into effect until the 17th century, all government persecution notwithstanding. At times the Anabaptists lived in caves such as the Anabaptist Cave . In 1651 Bauma separated from Bäretswil in church.

Since the hamlets on the hills were not village communities and also had no tent economy, they were open to the onslaught of the poor without protection. In 1771, almost 500 inhabitants lived in Wappenswil, many of whom lived with a textile home industry and lived in the typical Flarz buildings .

The large population, which is heavily dependent on the textile industry, made the area of ​​what is now the municipality of Bäretswil prone to crisis. The mechanization of yarn production in 1814–1816 gave home workers only the choice of switching from spinning to hand weaving . The renewed threat from the weaving factories was probably one of the reasons for the high number of rebels from Bäretswil who burned down a textile factory near Uster in 1832 ( Uster fire ). Later, weaving factories on Aabach brought earnings but also an industrial proletariat to the community - 55% of the population lived from the textile industry in 1880. Between 1850 and 1940 the community depopulated noticeably due to the economic situation and its location away from the traffic axes. The last weaving mill in the municipality stopped production in 1982.