Zurich German (own name: Züritüütsch ) describes the Alemannic dialect that is mainly spoken in the Swiss canton of Zurich .

The distribution area of ​​Zurich German is primarily the canton of Zurich. Excluded from this are parts of the Weinland and Rafzerfeld in the north and a narrow border area near Frauenfeld in the east , which includes the communities of Ellikon and Hagenbuch . These three areas are assigned to the Schaffhausisch-Thurgau dialect. In contrast to the north and east, where a clear bundle of isoglosses delimits Zurich German, the transitions to the south and west are more fluid. For example, the dialect spoken in Rapperswil-Jona in the canton of St. Gallen is practically identical to the Zurich dialect, whereas the language in the Knonaueramt already shows certain traits of the western and southern neighboring dialects.

Measured against the population of the Canton of Zurich (1.5 million), the Zurich dialect is the most widely spoken Alemannic dialect in Switzerland .

Zurich German is a high Alemannic dialect and has all the typical characteristics of Alemannic . It has its own sound, which many perceive as rough. The characteristic “ch” and “k” (“kch” ( kx )) are pronounced in a particularly throaty way - as in almost all German-speaking Swiss dialects - but so are the vowels , especially the “a”, which is very low, in contrast to the other northern Swiss dialects are not dimmed to the open "o".

In contrast to other regional dialects, Zurich German has always been quite homogeneous; the individual dialects of the various Zurich landscapes differ in sound and vocabulary only in details. Unlike in the canton of Bern, for example, where important isoglosses run close to the capital, the usage of language in the city of Zurich radiated far into the landscape as early as the late Middle Ages. This charisma is particularly clear in the so-called lowering of the long open òò / ɔː /, which for its part had been evaporated from Middle High German / aː / and was lowered again to / ɑː / from the early modern period - in which Zurich German is different from all other northern Swiss dialects can be demarcated (in the Zurich Oberland / ɔː / was closed on the same train as / oː /).

Today, many Swiss people consider Zurich German to be a relatively “unspecific” dialect. This is a view that is dialectologically in no way correct, but is not unjustified insofar as a radical change in dialect took place in the canton of Zurich in the course of the 20th century. The reasons for this are to be found in the fact that the city has become a national and international economic center and the landscape has become its agglomeration.

Characteristics of the regional forms 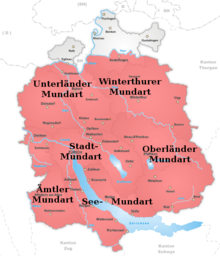 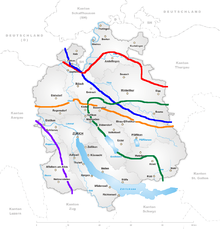 In literature, the form spoken in the city and by the lake is assumed to be the normal form.

A dialect is spoken to the north of Thur and Rhine which, from a linguistic point of view, no longer belongs to Zurich German, but to the Schaffhausen-Thurgau dialect area, although these elements are now partially pushed back by Zurich German. The lack of the Zurich-German overopened ä [æ], which is replaced by an open è [,], z. B. lèse for Zurich German were reading, or Lautungen as Braat for Zurich German bräit, üüs for Zurich German ÖIS, ois or he siet / siət / for Zurich German he gseet (he sees).
In the wine country, the indefinite neutral article is then called e, as in north-eastern Switzerland , e.g. B. e Chind (otherwise it is Chind; around Winterthur and in the Unterland are e and es next to each other).

The sound nid, niid (otherwise nöd, nööd ) for 'not' (also used in Schaffhausen and Northwest Thurgau ) is well known. The closed / e / in the two words Nescht (otherwise Näscht ) and Bese (otherwise Bäse ) is also characteristic of the Winterthur district and the Weinland ; The latter also applies to the Unterland, whereas the rest of Zurich German has overopened / æ /. Another peculiarity of the Winterthur and Weinland area as well as adjacent parts of the Lower and Upper Country (and the bordering Eastern Switzerland) are the short high vowels / iuy ø / which are pronounced closed. The pronunciation of the deep tongue vowels / a / and / æ / in open syllables also formed a contrast between the cities of Winterthur and Zurich: While these were spoken long into the 20th century in the capital and in the entire southern half of the canton ( e.g. baade , läse ), has known Winterthur like the entire northern half of the canton for a long time ( i.e. bathing, läse ). As Winterthur Schibboleth the use of the word Pünt applies to the allotment garden .

Same as to Winterthur and the wine country is here the closed pronunciation of the / s / in the word Bese (but not in Näscht ), and the indefinite neutral article can (but need not) e loud (e [s] Chind) . Typical for parts of the Unterland is the pronunciation nüd ('not'), while nöd at the lake and in the Limmattal , nid in Winterthur and in the Weinland . In the northern and western lowlands it is then called Tüne (otherwise Wèèe ' Wah ') as in the wine country and in the Amt .
Incidentally, the Lower Land dialect largely follows the common sea tongue, but never took part in the elongation of the deep tongue vowels that was in effect there until the first half of the 20th century.

The main characteristic of the Zurich Oberland dialect is the long closed (and not open as in the neighboring north-eastern Switzerland) oo instead of the normal Zurich (and Old High German) long aa: Strooss (otherwise Straass ), spoot (otherwise spaat ), Broote (otherwise Braate ), schlooffe (otherwise sleepy ), Spitool (otherwise Spitaal ). That the rest of Zurich German also had this dulling a long time ago becomes clear in the fact that in umlauted cases like Ströössli, later, Schlööffele the dulling is common Zurich German. It is also typical for the Oberland that (as in the subsequent canton of St. Gallen) ii, uu and üü are shortened before a t : Zit (otherwise Ziit ), Fritig (otherwise Friitig ), Züritütsch (otherwise Züritüütsch ), Chrüz (otherwise Chrüüz ). In the other areas, however, the Oberlandish differs little from the common sea mouth species.

The Seemundart, to which the dialect of the city of Zurich belongs, forms the actual center of many manifestations of Zurich German. Until well into the 20th century, the lake region was, for example, a center of expansion of deep tongue vowels in open syllables, for example baade ('bathe'), lääse ('read'), as well as the monosyllabic ( apocopied ) feminine, for example Naas (' Nose '), wing (' fly '). Both phenomena have meanwhile disappeared and are - as in the past in most of the neighboring dialects as well as in northern Zurich German for a long time - bathing, läse, nose, flights .
A word that only exists in Switzerland in the city of Zurich / Lake Zurich / middle Glatttal is Chrottepösche for 'dandelion'; other Zurich regions use words like Chettebluem (e), Griggele, Buggele, Söistock, Milchlig (stock) or Ringelbluem .

The dialect in the south and southwest of the canton of Zurich is a transition dialect to the dialects of the southeastern Aargau and Lucerne. As in the neighboring Freiamt and Zugerland and generally as in most Swiss-German dialects, the sonantas are spoken long (ll, mm, nn), the otherwise Zurich German has been lenized (l, m, n) . It says here also: gfalle (otherwise in Zurich gfale ) schwümme (otherwise schwüme ). The Ämtler dialect has a further feature within Switzerland in the verbal plural ending, which here is mir / ir / si machid, but in the rest of Zurich German is mir / ir / si mached .
The Albis chain is then the border between eastern overopened ä and western neutral è in the cases of high German "have, has, because, if". In this case, the Knonaueramt already works like western Swiss German: du hèsch (otherwise in Zurich häsch ), he hèd (otherwise hat ), dènn (otherwise Danish ), wènn (otherwise wänn ).
The Knonaueramt stands on its own with the dulling of a before l plus consonant, for example in olt (otherwise old ), cholt (otherwise chalt ), Olbis (otherwise Albis ).

Translation:
«Is standard German really that difficult? It is said that standard German is a foreign language. And funny: you say High German and don't even notice that you speak High German yourself, just a little different from the Germans. A woman in Greece, where I was on vacation, asked me in a large hotel corridor: 'Sii, where do you go to Schwümmbaad?' She thought I was a German. And the devil rode me, and I asked back: 'Would you like to swim a gogen?' We both had to laugh at that. Yes, that's how it feels sometimes, we both said. You don't always find access to standard German. And sometimes, when you wanted to do it particularly well, it turned out very wrong. And then one or the other said to themselves: 'I'm not trying anymore.' There it is! But we must not let this opinion tear, because it is not as difficult as it seems. We want to show that now. "

Due to the central function of the city of Zurich, the dialect spoken here is a focal point of the processes that are moving towards a unified northern and eastern Swiss dialect. Due to the large number of speakers and the role of Zurich as a business and media center, this “modern” Zurich German has a certain dominance among Swiss dialects, especially in the media. This is not welcomed in the rest of German-speaking Switzerland and is partly responsible for a so-called “anti-Zurich reflex”. However, it must also be taken into account that the Zurich dialect has given up and continues to give up many peculiarities in favor of features of other dialects and in particular of High German; There can therefore be no question of a displacement of other dialects by Zurich German, but rather of the emergence of an actual large-scale Koiné .

With U. a. the Trio Eugster , the Schlieremer Chind , the Minstrels , Toni Vescoli , Jimmy Muff and, more recently, with Schtärneföifi , Andrew Bond , Big Zis , Phenomden and Bligg , dialect music from Bern and Zurich is widely used.