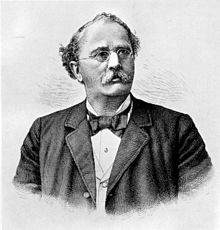 From 1857 to 1858 Guyer-Zeller studied economics and geology in Geneva . During this time he became a member of the Swiss Zofinger Association . As a young man he traveled to France and England, where he trained in various machine and textile factories, to Cuba and the USA. In his travel diaries he defended the slavery practiced there , which according to him corresponded to the "divine laws" and the "born to serve" nature of the Africans.

At the age of 24, Guyer-Zeller returned to Switzerland and in 1863 joined his father Johann Rudolf Guyer (1803–1876) in the Neuthal cotton mill . In 1866 he became their partner and in 1874 their sole owner. After his marriage to the Zurich industrialist daughter Anna Wilhelmina Zeller, he founded an import-export company in Zurich in 1869 and traded in textiles.

Later he turned to railroad construction , which was rapidly emerging in Switzerland at the time. Among other things, he became President of the Swiss Northeast Railway (NOB). Guyer-Zeller was also the founder of the Jungfrau Railway ( JB), which he founded in 1894 to finance the Guyer-Zeller Bank (today HSBC Guyerzeller Bank ), and the Uerikon-Bauma Railway (UeBB). The railway line of about Ofenpass leading Ofenberg train he could not put into action. After his death, the project that was supposed to have carried passengers from Chur to Trieste under the name “Engadin-Orientbahn” silted up .

In the valleys and forests around Bauma, Guyer-Zeller had various paths laid out for his workers in the Neuthal cotton spinning mill from 1890, which are still maintained today as the “Guyer-Zeller-Weg” and used as hiking trails.

Politically, Guyer-Zeller was on the side of the Liberals, for whom he sat on the Zurich Cantonal Council between 1869 and 1872 and between 1875 and 1889 . From 1888 until his death he also served as the Greek Consul General in Zurich. His residence in Zurich was the Greifenberg house. His grave is in the Bauma cemetery.

A section of Hofstrasse near Wetzikon train station was renamed Guyer-Zeller-Strasse.