The Volksoper Wien is the second largest opera house in Vienna . The program includes operettas , operas , musicals and ballet . 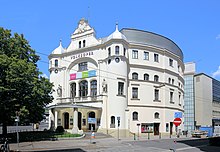 Foundation and time as spoken theater

The Jubilee City Theater Woodcut from the Leipziger Illustrierte from January 19, 1899

In 1897 Karl Lueger was appointed mayor of Vienna. The building concept - the redesign of Vienna - was the predominant social, economic and political trend in this era, also known as the Ringstrasse era. In the same year the Kaiserjubiläum-Stadttheater-Verein was founded by committed citizens of the City of Vienna with the aim of building a theater for the performance of German speaking pieces in Währing for the 50th anniversary of the reign of Emperor Franz Joseph I in 1898.

Since the building site was in the 18th district until 1905, the Christian social Währingen district chairman Anton Baumann was also heavily involved in this association . The theater association commissioned the architect Alexander Graf to carry out the construction; Together with the architect Franz Freiherr von Krauss, he built the Imperial Anniversary City Theater in just 10 months.

The fact that the emperor stayed away from the opening of the house, according to official reasons, because his wife Elisabeth had been murdered three months earlier, cast another shadow over the opening on December 14, 1898 . The theater association had anti-Semitic statutes, and the director Müller-Guttenbrunn reserved the stage for “Aryan talents”, allowed “only Christian actors” to perform and “only works by Christian writers” to perform. The most extreme pieces of propaganda were banned by the Lieutenancy. After this bad start to the theater, the first bankruptcy followed in 1903 after less than five years of playing .

The music theater from 1903 until the post-war years

The anniversary city theater at the time it opened, 1898

On September 1, 1903, Rainer Simons , who had completed his apprenticeship with famous singers such as Julius Stockhausen or composers such as Engelbert Humperdinck , took over the management . With a clear goal in mind, he continued the popular German speaking pieces in the spirit of his predecessor, but took the first steps in the direction of music theater . In 1904 he hired the young Alexander von Zemlinsky as music director, and in the 1904/05 season - in which the subtitle Volksoper also appears for the first time - he introduced the first game operas .

In 1905 the area of ​​the Währinger Theater became part of the Alsergrund , the 9th district, by changing the district boundary 9/18.

Due to the popularity of the audience, Simons and Zemlinsky dared to make the leap to great opera between 1906 and 1908. In 1907 Zemlinsky moved to the court opera, but returned a year later to the Haus am Gürtel. From 1908 the venue operated under the name Volksoper.

After many extremely successful years, the Volksoper had to grapple with the effects of inflation from 1925 onwards. After a few brief closings and various rescue attempts by working groups, it was closed on July 5, 1928 and only reopened as the Neues Wiener Schauspielhaus on November 5, 1929. In 1938, the City of Vienna took over what was now the City of Vienna Volksoper , later renamed the City of Vienna Opera House . The building was completely refurbished in 1938, the so-called “Führerloge” was built in, and a walled circular horizon was built for better acoustics. The numerous stucco work in the auditorium was removed. (Today only the entrance foyer and the break foyer are almost original). The main curtain has been removed. Towards the end of the Second World War , the Volksoper became the second largest cinema in the city with 1,550 seats for several months after all theaters had been banned from playing since September 1, 1944 and some of Vienna's cinemas had already been destroyed by air raids.

After the Second World War, the Volksoper acted as alternative quarters for the destroyed State Opera. After the opening of the restored State Opera building in 1955, the Volksoper became an independent musical theater with operas, operettas and musicals. In the same year it was integrated into the Austrian federal theater. Numerous additions were completed in 1963: enlarged back stage, above a rehearsal stage and the large ballet hall, the office wing in Lustkandlgasse - the transport of the scenery was relocated from the Gürtel (backstage) to Lustkandlgasse, which also created a new side stage. With the addition of a storey, a new lounge for the technology and cloakrooms for the technical team could be created on the roof of the Volksoper. The newly created turntables are also a special feature (a retractable core disc and a large main disc).

Volksoper from the belt

In 1973, under the direction of Karl Dönch, the theater was rebuilt. B. removed the center box. A sound control desk was installed for this, and the break foyer was renovated.

In 1979 Robert Jungbluth initiated a guest performance in Japan for the Volksoper in his former role as Secretary General of the Federal Theater Association. It was the first operetta to be performed in Japan. In 1984 an American tour followed.

From September 1991 to June 1996 the Volksoper and State Opera were under joint management. During this time singers were hired for both houses at the same time. The game was run autonomously, however, as both stages have different priorities.

Since September 1, 2007, the Vienna Volksoper has been under the direction of chamber actor Robert Meyer as director and artistic director. Rainer Schubert acts as vice director. At the same time Mag. Christoph Ladstätter was appointed commercial director. Malte Puls has been the head of the artistic office since September 2018.

Robert Meyer pursues a consistent reform policy. His aim is to reposition the Volksoper as “the music theater of Vienna”, to upgrade the operetta and to open it to a wider audience. Most of the new productions of the Meyer era are given in German.

Iron curtain of the Vienna Volksoper

On the iron curtain , the dedication of the house to the 50th anniversary of the reign of Emperor Franz Joseph I can be clearly seen through the two dates 1848, left, and 1898, right. The (original) main curtain was painted by Karl Schüller and Georg Janny .

The curtain shows the allegory of Vindobona with the city's coat of arms, which is still valid today. The man in the right half of the picture symbolizes the citizens of Vienna. By removing the bandage, he should now be able to see the beautiful muses.

Before the Second World War, the curtain was cleared away and was lost until it was found again in the attic of the Theater an der Wien in the 1990s and laminated onto the then iron curtain.

current seating plan of the Volksoper

A total of 1261 seats, 72 standing and 2 wheelchair spaces are available to visitors on three different levels. With a few exceptions, there is a daily demonstration from September to June. The following are the most important key figures from the last few years:

The Bundestheater Holding, which is responsible for maintenance measures, spent 1.1 million euros on the facade renovation of the historic Volksoper building in the 2006/2007 financial year. 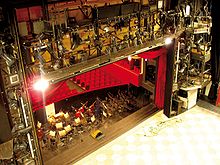 Lighting and view of the orchestra pit of the Volksoper

The orchestra pit is equipped with two electrically powered lifting platforms. The load-bearing capacity is 500 kg / m² (single platform at the front, double-deck platform on the stage side) and is height-adjustable from 0 to 2.65 meters below stage level.

The main curtain made of red velvet can be hydraulically gathered and raised. The gathering speed is 0.15 to 3.0 m / s; the lifting speed up to 2 m / s.

The sound curtain made of aluminum frame also works hydraulically. The additional load capacity is 300 kg with a point load of 150 kg. The lifting speed as a sound curtain is up to 0.8 m / s, as a heavy-duty hoist up to 0.5 m / s.

The hydraulically operated curtain hoist has a load capacity of 350 kg with a point load of 150 kg.

The stage area is 480 m² and can be loaded with a maximum of 500 kg / m². The usable stage width is 17.2 meters and the stage depth from the front portal edge to the sliding folding door is 19 meters.

Since 1999 the Volksoper Wien has been wholly owned by the Bundestheater Holding as well as the Staatsoper Wien GmbH and Burgtheater GmbH. Another subsidiary is Theaterservice GmbH, 51.1% of which is owned by the Bundestheaterholding. The remaining 48.9% are held equally by the three stage operators (16.3% each). Together with the Vienna State Opera, the Volksoper is subordinated to the independent ARGE Ballett of the Vienna State Opera and Volksoper .