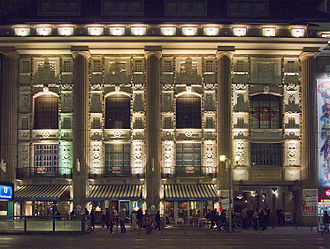 The Admiralspalast is a traditional venue in the Friedrichstrasse 101/102 in Berlin district center of the district of the same . It is one of the few remaining large entertainment venues from the beginning of the 20th century in Berlin. In 2006 the theater in the listed building was reopened after extensive renovation and renovation work.

In 1867, a brine spring was discovered by chance during construction work on Friedrichstrasse . The architects Walter Kyllmann and Adolf Heyden built a bathhouse for them in 1873, which soon assumed a predominant position among the Berlin baths as the “Admiralsgartenbad”. According to plans from the beginning of the 20th century, it was planned to convert it into a sports and entertainment facility.

Ice arena in the Admiralspalast, 1911

The building was demolished in 1910 and a multi-wing, four-storey amusement palace with luxurious bathrooms, an ice rink and restaurants was built according to plans by the architects Heinrich Schweitzer and Alexander Diepenbrock . In the following year, the house was opened under the name Admiralspalast and was soon considered one of the great entertainment venues in Berlin. In addition to an ice arena and the baths tract in the side building, the house in the front building on Friedrichstrasse had more than 900 rooms and halls and housed bowling alleys , a large café and a movie theater. The richly furnished rooms of the baths were open day and night. In addition to the 14 m × 5 m main pool, there were several Roman - Russian baths as well as men's and women's bathing rooms, which were decorated in the classic style with mosaic pictures and Karlsruhe majolica sculptures. In the 50 m × 23 m ice arena, "ice ballets" were performed, which were specially composed by the director of the house orchestra, Julius Einödshofer .

Around ten years later, the concept of the house was changed based on designs by architects Oskar Kaufmann and Richard Wolffenstein . The ice rink in the middle wing was initially converted into a variety theater (world variety) in Art Deco style with two tiers and 1,065 seats. In 1923 the operetta director Herman Haller took over the management and had it converted into a revue theater (theater in the Admiralspalast) , in which the famous Haller revues were then performed. It opened with the Revue Top and Bottom, for which Walter Kollo composed the music. Until the takeover by the brothers Alfred and Fritz Rotter in 1931, many more revues were performed there.

The conversion into a full theater with 2200 seats took place in 1930 and a year later a conversion in the expressionist style. In 1933, the Rotter Group, to which many other theaters belonged, went bankrupt and was taken over by the conductor Walter Hochtritt . In the mid-1930s, the focus of the repertoire shifted to operettas. In 1939 the Admiralspalast merged with the Metropol-Theater in Behrenstrasse. On December 20, by order of Reich Minister Goebbels and according to plans by Paul Baumgarten, the theater was completely redesigned into a “festive, beautiful place for recreation” in a simple, classicist form that has been preserved to this day. Johannes Heesters played Danilo in The Merry Widow here . After the in-house brine bath was closed in 1940, a year later a “driver's box” was installed in the middle of the first tier. On September 1, 1944, the Admiralspalast, together with the other Berlin theaters, was closed by order of the NSDAP because of the declaration of a " total war ".

The building was largely spared in World War II . The still intact and representative theater hall, which was located in the Soviet sector of Greater Berlin , served the Soviet occupying power and the German authorities after 1945 as a venue for political and cultural purposes. On the initiative of the Soviet military commander Bersarin , the German State Opera moved into the Admiralspalast , the building of which was no longer usable after being hit by a bomb . Two weeks after the opening concert on August 23, 1945, Gluck's Orpheus and Eurydice were performed . The State Opera played here for ten years and had a total of 55 productions.

On the occasion of the reopening of the Berlin University , a ceremony took place on January 29, 1946 in the Admiralspalast. On April 21 and 22, 1946, the Unification Party Congress of the Eastern Zone KPD and the SPD was held in the Admiralspalast , at which the founding of the SED was decided. After the split in the Berlin city administration, Friedrich Ebert Jr. was elected on November 30, 1948 in the building . to the Lord Mayor of East Berlin .

After the German State Opera was able to return to its traditional and rebuilt house on Unter den Linden in 1955 , the Metropol Theater moved into the Admiralspalast . Until it was closed in 1997, operettas and musicals were performed with a permanent house ensemble in the large hall with 1400 seats.

The concerts of the Berlin Symphony Orchestra took place for the most part in the Metropol Theater until it moved to the Konzerthaus on Gendarmenmarkt in 1984.

After a long period of vacancy, the cultural entrepreneur Falk Walter ( Arena , Badeschiff , Hoppetosse etc.) took over the building complex in 2005 , which was then extensively renovated. The Admiralspalast was to be rebuilt in its old glory with a theater, luxury bath, café, restaurant and club. Original marble tiles, mosaics and glass paintings that had been stored in a Lichtenberg depot were still available for the renovation of the bath.

The official reopening took place on August 11, 2006 with a performance of the Threepenny Opera , directed by Klaus Maria Brandauer, with Campino in the role of Mackie Messer in the still unfinished building, which was met with mixed criticism . At the post-premiere party, u. a. the then 103-year-old Johannes Heesters and joined the big band in several of his great successes.

From 2008 to 2010, the Admiralspalast continued the tradition of the Haller revues with the monthly Berlin Revue show : the composer and entertainer Mark Scheibe regularly gathered an orchestra and dazzling singers from the city for an anarchist and glamorous spectacle.

For 2010 the building was awarded a federal prize for handicrafts in the preservation of monuments .

The radio station radioeins operates a broadcasting studio in the Admiralspalast.

Due to rent debts amounting to 380,000 euros, the operator of the venue, Admiralspalast Produktions GmbH, filed for bankruptcy in August 2010 , but operations continued.

Since June 15, 2011 the house has been owned by the producer Maik Klokow and his Mehr! Entertainment operated.

According to media reports, the property itself is said to belong to the Samwer brothers .

In 2012 Linkin Park gave a concert in the Admiralspalast as part of the Living Things Tour . The concert was broadcast in around 200 US cinemas.

In addition to the large hall, the studio on the fifth floor, which was under construction until May 2007, has also been used since 2006 . The studio was opened by the Flöz family theater company. It had 450 seats and a grandstand with seats that could be removed upwards for rock concerts . The studio was closed in spring 2019 and has not been available as an event space since then.

Stage F 101 on the third floor had a low ceiling, flat seating and a capacity of around 200 people. The BIMAH , Dan Lahav's Jewish theater, was located here from 2011 to 2014 before it moved to Meinekestrasse near Kurfürstendamm . The F 101 offered many artists the opportunity to play and try out in front of a small audience. Like the studio , the F 101 was closed in spring 2019 and has not been available as an event space since then.

The basement under the inner courtyard was only completed as a shell after the work in 2006 . In 2013 this location was temporarily used as the Admiralspalast Club for Guntbert Warns ' production of Hedwig and the Angry Inch with Sven Ratzke . The club was closed in June 2016.