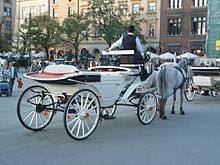 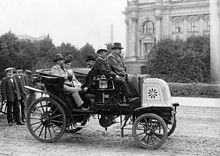 The first Berlin power carriage (around 1900)

Horse cabs in Dresden, around 1885

A cab is a light, open and sprung vehicle for up to five people. A distinction between a horse-drawn cab , even cab called, pulled by horses, and a Kraftdroschke (also Motordroschke or Autodroschke ), with a motor-driven cab - so a taxi - is called. The driver of a cab is called a cab driver .

Cabs were the forerunners of today's public transport . The vehicle was only able to establish itself permanently at the beginning of the 19th century. The sedan chair can be regarded as its predecessor .

The name "Droschke" comes from the adoption of the Russian word "drožki" ( дрожки ), which in the 18th and 19th centuries. Century a light, comfortable carriage or sleigh was designated for the exit of noble people. These vehicles were used in Saint Petersburg , but also in other courts , such as Warsaw .

It can be proven that Germans living in the Baltic States and in Saint Petersburg used the word at the end of the 18th century and subsequently, especially in travelogues about Russia . It was later used more widely in Berlin and so it finally came to the entire German-speaking area. Despite the switch from horse-drawn vehicles to motorized vehicles , the name was initially retained in part. Since horse cabs are rarely used nowadays, the special term “power cab” became “cab” again.

By Simon Kremser , the most from 1825 with royal permission Brandenburg Gate persons carriages could establish that used by him kind of horse-drawn got the special designation of "Kremser".

The arrival of the cab in Germany probably began in 1815, when the Dessau horse dealer Alexander Mortier , also written as Alexi Mortgen, introduced the hire-carriage service in Berlin together with the Berlin-born Israel Moses Henoch . The first Warsaw cabs were actually imported from the Polish capital. The two entrepreneurs started out with 32 cabs. Over time, the narrow Polish carriages were replaced by more elegant and wider ones based on the English model. By 1827 the fleet had grown to 120 vehicles. The concession granted in 1814 guaranteed the company a monopoly position for years before free competition was opened. As a result, the number of cabs increased tenfold and the condition of the wagons and horses deteriorated dramatically, with the result that the police withdrew half of the vehicles from use. This is where the term horse cab developed. In the meantime, the cab spread to many other cities. In Basel , for example, 20 cabs operated in 1854. This corresponded to 0.64 cabs per 1000 inhabitants. In 1874, there were already 106, or 2.12, cabs for every 1,000 inhabitants in Basel. The end of the cab came with the introduction of the automobile and the tram.

In the photo from 1902 shown on the right, the transition from the horse-drawn cab to the self-driving mobile, the car, becomes clear. The magazine Die Woche devoted a lot of space to this paradigm shift at the beginning of the 20th century. The photo was the beginning of a picture story with the title “Ross und Schnauferl. Snapshots from the country road ”.

Today, cabs can only be found in very few places (e.g. Fiaker in Vienna or Salzburg). However, they no longer serve as a real means of transport in everyday life. They are all tourist attractions that are only used for short journeys on certain routes. For reasons of animal welfare , your company has come under fire. On the other hand, they are seen as a typical element of a romantic, historical cityscape.

The French physicist and Nobel Prize laureate Pierre Curie died on April 19, 1906 when he got caught in a cab and suffered a fractured skull.

With the novel Der Eiserne Gustav from 1938, Hans Fallada created a literary monument for the cab. The story was filmed in 1958 with Heinz Rühmann and implemented as a television series with Gustav Knuth in 1978 .