This article deals with the fiaker in the equestrian industry. For the Viennese coffee specialty, see Fiaker (coffee) .

Fiaker in front of the Austrian parliament building

Fiaker in front of the civil armory at
Am Hof

The Fiaker monument by Josef Engelhart on Fiakerplatz in Vienna- Landstrasse

A Fiaker ( Croatian fijaker , Hungarian fiáker ) is both a two-horse wage carriage and its driver .

The term Fiaker was borrowed from the French Fiacre in the 18th century . The rue de Saint Fiacre was home to the first stand for wage carriages, which the French merchant and horse dealer Nicolas Souvage had been using since 1662. Rue de Saint Fiacre, on the other hand, is named after the hermit Fiacrius , who came to France from Ireland in the 7th century and founded a hermitage in a wooded area southeast of Meaux ( Seine-et-Marne department ). He owed the necessary land to Bishop Faro von Meaux .

The first license was granted in Vienna in 1693. The numbered carriages replaced the previously unnumbered Janschky carriages . Around 1700 there were around 700 fiakers in Vienna. In the prime of the period from 1860 to 1900 there were over 1,000 cars.

The fiakers were often originals well known in the city, including Josef Bratfisch and Karl Mayerhofer . It is said that a particularly large number of Fiaker drivers used to live in Fiakerdörfl at Fiakerplatz in the 3rd district . Here is the Fiaker monument created by Josef Engelhart in 1937, which presumably represents the Fiaker Josef Schmutz (colloquially: Schuaster Fraunz ).

Fiakers are a popular tourist attraction and usually offer tours in the area of Vienna's old town from several locations . A tour is also offered at the Vienna Central Cemetery . In 2008 there were 144 Fiakers, half of which drive on even days and the other half on odd days. Many of these horse-drawn carriages are now over 100 years old and are extensively restored in the winter months. In winter the fiakers have no earnings. There are stands at Stephansplatz , Heldenplatz , Michaelerplatz and Petersplatz as well as at the Burgtheater and the Albertina behind the Vienna State Opera . The prices for tours of different lengths are set by the City of Vienna.

Since 1984 the Viennese Fiakers have also had female coachmen. A special test, the driving service test, has been necessary in Vienna since 1998 in order to drive a Fiaker. This exam requires basic knowledge of the most important sights in Vienna. The operating rules for Fiaker and horse rental car companies regulate, among other things, the traditional clothing of Fiaker drivers.

Fiacre also took place in other cities of the Austro-Hungarian Danube monarchy (from Prague via Budapest to Lviv ) and until today they belong in some Austrian tourist hotspots (such as Vienna , Salzburg ) historic quarter. In the Czech town of Karlovy Vary , inner-city traffic for motor vehicles is limited and fiakers open up the spa center for tourists.

Around 50 Fiakers were working in Rome in October 2016, compared with around three times as many in the 1980s. Animal rights activists have brought in 10,000 signatures against the carriages at the community, because the horses would not only suffer in 35 ° C heat. Ultimately, Mayor Virginia Raggi wants to abolish horse-drawn carriage rides, and the head of the Environment Commission does not think it is suitable in today's traffic.

In the United States, there is a cab service in Central Park, New York .

In Graz , Josef Uitz last offered sporadic carriage services around 2000 and was the only one on Graz's main square. He came with the couple from his company location at Triester Straße 390 (2.5 km south of the central cemetery) to the town hall, six kilometers away, for example for weddings. He died on August 9, 2014.

In Feldkirchen bei Graz , around 4 km south of the Graz Central Cemetery, the museum association has archived the following documents: In 1854 Johann Florianz asks the community council to obtain his "Fiaker business award", in 1909 the market community agency drafts a "new Fiaker tariff", and in 1910 one appears “Wage coachman regulations for one and two-in-hand wage drivers” and a “Fiaker tariff”.

In Salzburg on April 23, 1943 the Salzburger Zeitung reported on page 3 about the coachmen in Salzburg.

Fiakers play a role in many of the songs. The most famous Fiaker song comes from Gustav Pick . In the opera Arabella by Richard Strauss , the figure kicking Fiakermilli on, a tribute to the popular singer Emilie Turecek , who was married to a cab.

The pollution of the inner city of Vienna by horse droppings from the driving around and the unpleasant smell caused by the fact that the Viennese Fiaker horses were prescribed Pooh bags by state law on July 1, 2004 . This regulation is controversial among the fiakers, on the other hand, a high fine is provided for failure to comply. In addition, the city administration came to the conclusion in 2007 that the iron horseshoes wear down the pavement more than cars and trucks, which has led to renovation costs of around six million euros, and therefore prescribed the animals to try plastic horseshoes. 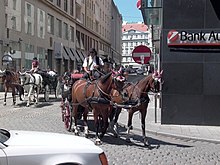 The animal welfare organization Verein gegen Tierfabriken criticizes the conditions under which Fiaker horses are used and their accommodation during non-working times. According to this organization documented cases already where horses in cellars in tethering were staying.

Sun protection sails and water hoses for cooling are available for Fiaker horses in Vienna. Since autumn 2011, Fiakers have had number plates and keep logbooks in which trips, feedings and breaks are entered.

The animal welfare organization Vier Pfoten calls for the ban on horse fakers, as they are also involved in traffic accidents.