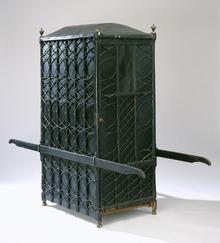 A sedan chair (also chaise ) is a frame carried by people (also litter bearers or chaise carriers ) or beasts of burden on rods protruding at the front and back for the gentle ( gentle ) transport of people.

Sedan chairs have been used to transport dignitaries or people with walking difficulties since early human times. In the mountains, mules were often used as porters .

Since the 17th century, public sedan chairs were also in use in larger cities as a precursor to today's taxis . These so-called portechaises were used in Paris from 1617 and in Berlin from 1688 . In Berlin, the Huguenots were initially privileged as litter-bearers. In 1688, the guild of Turkish chair bearers was founded in Munich , whose members had been abducted as prisoners of war during the Turkish wars and members of the court had to carry them through the city. When an exchange of prisoners was discussed in the course of the Peace of Karlowitz in 1699 , the only concern of the Bavarian Elector was "that this would mean that carrying armchairs would not even go away."

A Saxon chaise bearer in uniform and a belt

In Dresden in 1710 Johann Friedrich Landsberger already had ten sedan chairs with twenty porters, and around 1781 in Vienna there were a hundred public porters . Although at that time it was already in competition with the fiacers , the last company there did not cease to operate until 1888. As early as 1878 the chaise longue ended in Dresden ; However, the cooperative, which has existed since 1717 (today trading under the name of Genossenschaft Ratschaisträger e.G. zu Dresden ) continues to operate as a special transport company for heavy furniture and for moving machines and some such companies still had "Hofchaisträger" on their old furniture vans after 1930.

For a long time, sedan chairs had an advantage over cabs and carriages because of the poor road conditions; only when these improved did they fall behind their competitors in the long run.

The use of palanquins continued in the custom of dignified coffin-carrying at a funeral or memorial service, although the heavy coffin could more easily be carried on a vehicle or a carriage.

In the south of Ghana , the Akan in particular use boat- and chair-shaped litters, which are used by the kings and their queen mothers as well as by their sub-chiefs. In contrast to the Akan , the Ga in the Greater Accra region also use figural sedan chairs which, in their symbolic form, are modeled on the animals, plants or objects that represent clan and family totems in the Ga . In the Ga, unlike the Akan, litters are not used by the highest chiefs, but only by the secular sub-chiefs ( mantsemei ) and not by women either. Today the Ga rarely use figurative sedan chairs. However, they now correspond to the figural coffins , which are also known on the western art market , in which not only the traditional heads, but also Christian gaols can now be buried.