The Peace of Karlowitz was concluded on January 26, 1699 . With him ended the Great Turkish War between the Ottoman Empire on the one hand and the Holy Roman Empire , Poland , the Republic of Venice , the Papal States and Russia on the other. 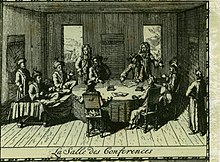 Contemporary presentation of the peace negotiations in Karlowitz

The Great Turkish War began with the second Turkish siege of Vienna in 1683. After the victory over the Ottoman army of Grand Vizier Kara Mustafa by the Polish King John III. Sobieski on September 12, 1683 in the Battle of Kahlenberg also took part in Venice (from 1684) and Russia (from 1686) in the fight against the Ottomans. The war goal was to stop the expansion of the Ottomans, who had been advancing further and further into European core areas from the southeast for about three centuries, and to push them back as far as possible towards their own heartland. The main theater of war was Hungary , which the Ottomans eventually lost. After the victory of Prince Eugene of Savoy on September 11, 1697 in the Battle of Zenta over Sultan Mustafa II , the Ottoman will for renewed western expansion was broken. All sides were now ready for peace.

Karlowitz (today's Sremski Karlovci in Vojvodina ) was chosen as the place of negotiation because it was on neutral territory between the Habsburg Peterwardein and the Ottoman Belgrade. The negotiations lasted from mid-November 1698 to January 1699. The Ottoman Empire was founded by the Reis Efendi ("Foreign Minister") Rami Mehmed and the Dragoman (portal interpreter) Alexander Maurokordatos , Roman-German Emperor and Holy Roman Empire by the Counts Kinsky , Öttingen and Schlick and Marsigli (only as consultants) are represented. Carlo Ruzzi negotiated for Venice, for Poland Malachowski and Prokopij Wosnitzin represented Russia.

After the Peace of Karlowitz, the Ottoman Empire had to cede all of Hungary including Transylvania (but without the Banat of Temesvar ) and most of Croatia (roughly today's Slavonia ) to Austria . The possession of the Morea peninsula, which had existed since 1686, was confirmed to the Republic of Venice , while Poland received back Podolia, which had been occupied by the High Porte since 1672, with Kamieniec Podolski and other parts of the Ukraine .

The peace treaty marked a turning point in European history: never before had a sultan of Constantinople laid down his arms in front of a non-Muslim power. The Peace of Karlowitz laid the foundation stone for the new great power Austria and was the beginning of the era of the military decline of the Ottoman Empire.

Russia signed an armistice for two years, which led directly to the Peace of Constantinople (1700), in which the Russian possession of Azov was confirmed.

The cartographic recording of the negotiated border stipulations incumbent Johann Christoph of Naumann , who belonged to the imperial embassy. Naumann then worked for a number of years as an imperial border engineer with the task of razing the places fortified by the Turks along the Maros river and building new fortifications on the Austrian side.