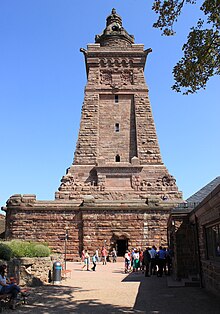 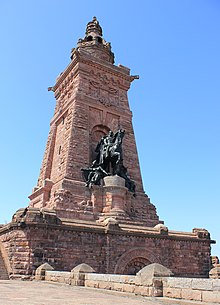 Equestrian statue and tower (after renovation in 2015)

Near the Kyffhäuser Monument is a monument to the German Field Marshal and President Paul von Hindenburg . Furthermore, the Kyffhäuser Burghof has been located on the monument as a restaurant since 1892 .

The Steinthaleben district of Rathsfeld is about 3 km southwest and the core town of Bad Frankenhausen , both of which belong to the Thuringian Kyffhäuserkreis, is about 6.5 km (as the crow flies ) south . A little to the north is Sittendorf and northeast of Tilleda , both of which belong to the town of Kelbra ( Mansfeld-Südharz district , Saxony-Anhalt) and are located in the Goldenen Aue (approx.  160  m above sea level ) around 260 m below .

Wilhelm I on horseback

After the death of Kaiser Wilhelm I in 1888, representative monuments were erected in many places in honor of the deceased. The Kyffhäuser monument is one of the largest and most famous of these Kaiser Wilhelm monuments. Together with the Niederwald monument near Rüdesheim am Rhein , the Hermann monument near Detmold in the southern Teutoburg Forest , the Kaiser Wilhelm monument at Porta Westfalica near Minden at the east end of the Wiehengebirge, the Völkerschlachtdenkmal in Leipzig and the Walhalla near Donaustauf , it is part of the group of the monumental memorial buildings in Germany.

For the historian Herfried Münkler , the enormous dimensions, as is so often the case in Wilhelminism, do not necessarily testify to self-certainty and future security. The imposing memorial buildings are more of a symbolic bulwark against external and internal enemies. In this case, the main concern would be the internal enemies, the German social democracy , against whom the war clubs wanted to stand as guardians and safeguards of imperial unity. Such a fate was not to happen a second time to the empire that had once perished in internal strife. The mighty Kyffhäuser Monument was intended to express this determination.

The Kyffhäuser Monument was built according to the plans of the architect Bruno Schmitz and inaugurated on June 18, 1896. The monument building was suggested by the German Warrior Association , which also took over the monument management from 1900 as the Kyffhäuserbund .

From 1994 to 2014 the monument was renovated at a cost of 14 million euros. Among other things, it lost visitors due to construction work. In 1996 there were 487,000 visitors, in 2012 only 131,000 came. The operator, the Kyffhäuser Tourism Association, had to file for bankruptcy at the end of 2013 (a successor to the Südharz Kyffhäuser Tourism Association was founded in early 2015). Kur & Tourismus GmbH Bad Frankenhausen has been the new operator since 2014.

Grotto from the tower - in the background the Reichsburg

The architecture is stylistically based on the castle construction of the Staufer period . The pictorial program is intended to depict the new, Prussian- dominated empire as the legitimate successor to the medieval Holy Roman Empire .

Wilhelm I. (above) and Friedrich I. Barbarossa (below)

In the base area of ​​the 81 m high monument there is a 6.5 m high figure of Frederick I (Barbarossa), chiseled from sandstone by the sculptor Nikolaus Geiger , who just seems to be awakening. Above it is an 11 m high equestrian statue of Kaiser Wilhelm I by the sculptor Emil Hundrieser , a copper work in neo-baroque forms. It is the only original and in situ preserved equestrian statue of Wilhelm I in the area of ​​the former Soviet occupation zone (SBZ) and the German Democratic Republic (GDR). The composition conveys the programmatic idea of ​​the monument, which took up the medieval Kyffhauser saga and continued it into the present: Kaiser Wilhelm, sometimes referred to as Barbablanca , completed the unification of the empire for which the German people had waited so long.

The monument has a 57 m high tower crowned with an imperial crown, from whose dome one has a good all-round view after climbing the 247 steps. The view not only falls into the Kyffhäuser Mountains , but also to the Harz (e.g. with the Brocken ) in the northwest, north and northeast, in the Goldene Aue in the north and the Thuringian Forest ( e.g. with the Großer Inselsberg ) in South.

The castle museum, which mainly deals with the imperial castle and the legend of Barbarossa, is located in the associated monument building .

On May 6, 1939, a Hindenburg monument by Hermann Hosaeus was inaugurated below the Kyffhäuser monument . The ten-ton, five-meter tall figure is made of Bavarian porphyry . The statue was overturned in 1945 and buried in place. On June 7, 2004 the owner Paul Breul found the buried statue on his property. Since the authorities are unclear about the legal situation and the future handling of the monument, it is still only half excavated and fenced in the ground.

Street of the Monuments

Since 2008 the Kyffhäuser Monument has belonged to the Street of Monuments , a network of German monuments and places of remembrance founded on the initiative of the Leipzig City History Museum . The aim of the network is "to network the places of remembrance as former focal points of the past more closely and to make them more tangible as a whole through joint marketing measures".

Street of the Monuments