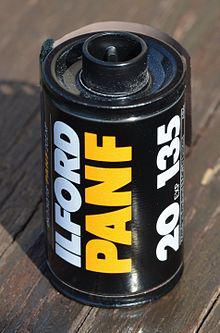 Ilford Imaging UK Ltd. is one of the world's most important manufacturers of black and white photographic films and photo papers .

Among the most famous products of Ilford black and white film include XP-2 (to develop the C-41 -Standardprozess for color negative films ) and the photo paper Ilfochrome (originally Cibachrome , developed in cooperation with the chemical company Ciba Geigy ) and the ILFOCOLOR -Farbmaterialien.

The company Ilford was in 1879 by Alfred Hugh Harman founded, was originally called Britannia Works and produced photographic plates in the center of Ilford .

1989 Ilford was taken over by the US company International Paper , which also included Anitec ; the two companies were merged in 1990 to form Ilford Anitec .

Both the British parent company Ilford Imaging UK Ltd. as well as the German branch Ilford GmbH filed for bankruptcy in mid-2004 , after more than 50 percent of the workforce had previously lost their jobs due to internal measures.

In the course of the bankruptcy, the Swiss and British Ilford were economically separated.

The British company Ilford emerged from the insolvency proceedings through a management buy-out and has since prospered with a reduced workforce but a full product range.

It now operates as Ilford Photo Harman Technologies Ltd. in memory of the founder.

Production takes place at the Mobberley , Cheshire site, with the exception of the production of chemicals for processing the film and photo paper, which was outsourced to an external service provider following the bankruptcy proceedings.

The British part of the company was able to make profits again shortly after the rescue.

There is also Ilford Imaging Switzerland , which produces papers for inkjet printers , as well as classic color films and papers ( Ilfochrome , Ilfocolor , Ilfoflex ).

This company was taken over at the beginning of July 2005 by Oji Paper , a large Japanese specialty paper group, which strengthened its market share in the inkjet paper business. In April 2010 Ilford Imaging Switzerland was taken over by the financial investor Paradigm Global Partners LLP .

A little later, Adox Fotowerke Bad Saarow took over significant parts of Ilford Imaging GmbH iL in order to be able to continue producing films and photo paper in Marly .