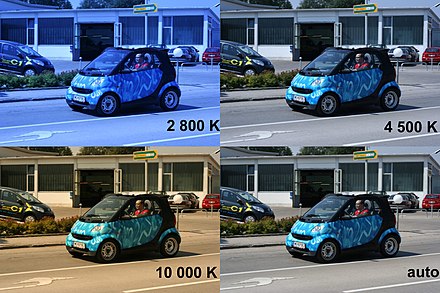 A picture, photographed in raw data format, and later set the white balance in four different ways. The actual display depends on the color temperature of the monitor or printer used for the display.

The human eye also has such an ability, chromatic adaptation .

Foldable gray card made of fabric

There are two strategies for automatic white balance:

The fully automatic white balance also often fails when taking pictures in twilight. On the other hand, the automatic adjustment is the method of choice in rapidly changing light conditions, such as a mixture of sun and broken clouds.

Specification of a typical color temperature

Photographers can manually set a color temperature that is typical for certain lighting situations. With the setting for lighting by fluorescent lamps, for example, a color temperature of 4000 Kelvin can be specified, the camera itself no longer performs any calibration. 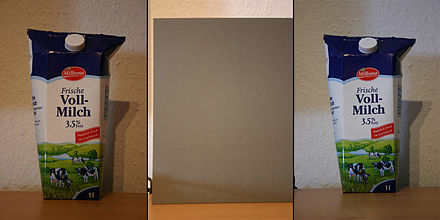 The first picture shows a milk carton with falsified colors taken under artificial light. In the second picture, a gray card for manual white balance was positioned in front of the milk carton in the same light situation. After the camera has been calibrated accordingly, correct coloring can be seen in the third image.

For manual white balance, the camera or device is held in full format on a surface that is as white or at least neutral gray as possible in the area to be filmed or photographed. A white sheet of paper is sufficient in most cases, whereby the exposure should be reduced so that none of the color channels are overloaded. Papers often contain optical brighteners that appear blue when the camera is exposed to UV light, which causes a yellow tinge after the white balance. A so-called gray card is therefore more suitable. After activating the corresponding function, the camera processor can determine the correct color temperature.

A white balance generally works best in constant and uniform lighting situations. With mixed light, for example when daylight and artificial light are in the subject, color casts can occur even with manual white balance, because one part of the subject necessarily requires a different color temperature. In this sense, a lighting combination of incandescent and energy-saving lamps is also critical.

A camera assistant holds up a gray card in the subject area (microphone). The cameramen do the white balance

A “neutral” white balance card similar to a gray card should be used as a reference. Nevertheless, there are still differences between various light sources in all cases of white balance. A white balance with a bluish light, for example, means that in the subsequent photos the color blue is "withdrawn" from the entire image and thus also from the actually blue objects. This effect can in turn be minimized by using a daylight lamp as the light source.

Suitable camera firmware or image processing software allow a subsequent white balance with quite good results. There are also fully, semi-automatic and manual processes for this. When adjusting manually using software, you determine a white point in the image. With comfortable programs, this can be refined if necessary by selecting several points, which are then averaged . Often it is also possible to specify the color temperature of the ambient light when taking the picture. A high setting of this color temperature results in a warmer image, as the software corrects the mostly increased blue component downwards.

A subsequent white balance can best be carried out without loss if the images have been saved in the (mostly camera-specific) raw data format. This means that you do not necessarily have to choose the white balance for taking the individual image on site and that you have the greatest possible freedom in post-processing. The additional inclusion of a white balance card or gray card is useful for post-processing, since the necessary white point cannot be found in every subject and can be individually transferred from one image to another. In contrast to the raw data format, correcting the white balance of a picture that was saved with the lossy JPEG method sometimes leads to a loss of quality, since important information on brightness and color intensity may be lost during data compression .