According to the Roman writer Pliny ( Naturalis historia 7, 47), Caesar , the first bearer of this name, was cut from the womb. This is supposed to have given him the name Caesar . Johannes Melber formulated about this in 1482: " Cesar keiser, sic dictus, quod ex ventre matris cesus " ("Caesar, emperor, so called because he cut from the mother's belly"). Cesus (= caesus , 'cut', from caedere , 'hew', 'cut') is also related to caesura (from Latin caesura , 'cut', 'cut'). Since Caesar gave rise to the word and term emperor , the sectio caesarea ("Caesarean section") became the word caesarean section (via Middle Latin sectio caesaria ) . In the English-speaking world, the procedure is still called the Caesarean section today . 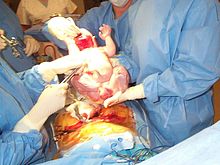 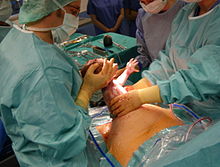 Situs in front of the uterine suture

Around 10% of all caesarean sections in Germany are based on absolute indications , whereas around 90 percent are decided on the basis of relative indications .

In the past , this operation was performed almost exclusively for medical reasons when giving birth via the vagina seemed too dangerous for mother or child, nowadays around every third child in Germany is delivered by caesarean section instead of through the birth canal , although there are large regional differences (caesarean section rates between 17% and over 50%) which are “medically inexplicable”.

The sharp rise to an average of 31.9% is controversial, especially since the WHO considers a caesarean section to be medically indicated in only about 10–15% of births.

Around two percent of caesarean sections in Germany are performed without medical indication (“ Desired Caesarean section ”; see there for advantages and disadvantages compared to vaginal birth ). In other countries, e.g. B. Brazil (54.6% in 2017), China , Mexico (45.2% in 2017), the desired kaiser cut rate is significantly higher.

Possible consequences for mother and child

Breastfeeding is just as possible after a caesarean section as it is after a vaginal birth; however, it usually takes about a day longer for the milk to come. The healthy child usually has enough of its own reserves for this time, so it does not have to be fed. Every woman in Germany has the right to a midwife visit her home for eight weeks after the birth of her child. The midwife can also provide help with breastfeeding problems. Breastfeeding-friendly pain relievers are often essential in the days after the birth because of the abdominal wound. Gynecologists are allowed to prescribe domestic help for the difficult initial period.

Modern, gentler surgical procedures such as the Misgav-Ladach method have shortened hospital stays to a few days. This method greatly reduces the amount of muscle tissue cutting. Instead, by stretching and tearing the tissue, the abdominal wall and uterus are opened wide enough to allow the child to be removed. It has been shown that blood loss is minimized and the resulting surgical wound heals faster and with fewer complications than the wound resulting from conventional surgical techniques. In addition, the "gentle" caesarean section is quicker and is a short procedure with an operation duration of 5 to 15 minutes. However, the Misgav-Ladach method has no influence on the size of the abdominal wound.

In Germany, the rate of Caesarean sections doubled between 1991 and 2011. Among the federal states, the lowest proportion was often in Saxony. The German federal government saw the reasons for the increasing caesarean section rate, among other things, a growing proportion of high-risk pregnancies among pregnant women and a changed risk-benefit assessment in individual cases due to advanced surgical and anesthetic techniques. The proportion of high-risk pregnancies among all pregnancies increased from 68.5 to 73.4 percent between 2001 and 2010.

The increasing frequency of caesarean sections suggests that this is not just due to medical necessity. According to the Federal Statistical Office, around a third of all pregnancies made the decision to have a caesarean section in 2011, whereby only around 10 percent were medically indicated. The increasing number of hospital deliveries played a role at times. However, a survey of around 4,200 mothers insured with BARMER GEK by the Bertelsmann Foundation in February 2012 showed that “the cesarean section rate without medical indication [...] was less than two percent”. Rather, according to the study, a "tendency towards (supposed) risk avoidance" can be seen, since the risk orientation of gynecologists, both during pregnancy and during childbirth, results in "defensive obstetrics" for liability reasons.

The increased risk of birth defects makes doctors increasingly incline towards a caesarean section in case of doubt for reasons of liability law in the case of problematic pregnancies (e.g. large head circumference, lateral position, premature birth , often also due to breeches). Further reasons for the increasing caesarean section rate are the increasing average birth weight in industrialized countries, which is apparently mainly due to the changed eating habits, organizational advantages ( preferred caesarean section ) and financial effects (doctor's fee). There may be a connection with undetected gestational diabetes . With a foreseeable birth weight of well over four kilograms, attempts are initially made to induce the birth with hormones. If this does not work, a caesarean section is usually performed. From a foreseeable birth weight of 4000 grams, the doctor is obliged to point out the possibility of a caesarean section, at least if there are further risk factors, in the opinion of the Frankfurt am Main Higher Regional Court. There is some evidence that caesarean section could be a risk factor for developing food allergies or asthma in the newborn.

Study results in 2010 found that the rate of Caesarean sections in the districts and urban districts in Germany varied between 17% in Dresden and 51% in Landau in the Palatinate - that is, three times as much. The most important influencing factor for these differences is the different procedure for the so-called relative indications for a caesarean section. On the other hand, frequently mentioned "factors - such as the age structure of the mothers, the level of education, a different distribution of premature or multiple births, of children with particularly high birth weights or maternal (underlying) diseases - [...] the observed extent of the increase and regional Do not explain the variation in Caesarean section rates. ”Regional differences in Caesarean section rates are therefore not due to differently distributed risk factors (such as the age of the mother). Instead, the existing room for maneuver in terms of the relative indications for a caesarean section is assessed differently by the obstetricians in the clinics.

In the United States, there are regional differences of 200 to 300 percent in primary Caesarean section rates, which the German federal government explains by different obstetrician decisions and a lack of clinical decision-making guidelines.

It could not be proven that continuous CTG writing during VBAC has a positive effect on the outcome of labor; however, it increases the rate of repeated Caesarean sections. Thus, mothers who want to give birth vaginally benefit from cardiac monitoring at intervals instead of continuously, which is possible with a Pinard tube or Dopton in addition to CTG . Artificial hormones (for induction of labor / intensification of labor), especially misoprostol / prostaglandin, increase the likelihood of uterine rupture in VBAC and should be minimized. Births in quick succession also increase the likelihood of a uterine rupture with VBAC.

When a new cut is made, the old scar is usually opened again. A rough, unsightly healed old caesarean section scar is cut out in the shape of a spindle, so that only a scar remains. A repeated caesarean section is usually a little more difficult for the surgeon, as adhesions must be expected after every abdominal operation.

Caesarean sections are operations that do not require a high level of technological development, so in principle they could already be practiced in prehistoric times. Occasionally, contemporary ethnologists have seen such operations among indigenous peoples. Written sources (Mesopotamian cuneiform tablet, Roman lex regia from 715 BC) indicate that caesarean sections have been practiced in Indian and Jewish cultures since antiquity. Regardless of this, the caesarean section was probably not practiced regularly in antiquity, neither Soranos of Ephesus (around 100 AD) nor Galen (2nd century) or Mustio (6th century) record this method in their textbooks.

It is a legend that Julius Caesar himself was delivered by caesarean section, as his mother survived the birth. At that time, this practically did not occur in a caesarean section and would therefore have entered history.

Different incisions of the laparotomy ; Left side Pfannenstiel incision according to Johannes Pfannenstiel and right side median lower abdominal laparotomy.

From the 6th century at the latest, however, there is an obligation in Roman law to perform a caesarean section on a dying or just deceased pregnant woman in order to possibly save the child or at least be able to bury it separately:

“A royal law forbids a woman who has died pregnant from being buried before the fruit of the womb has been cut out. Anyone who does not do this exposes himself to the charge of having killed the hope for the life [of the child] with the pregnant woman. "

This law is referred to in the digests as lex regia , ie a law from the time of the kings (753-510 BC), and could therefore be very old. Some authors contradict this and understand it as a law of Christian origin, which - given the lack of mention in medical sources - is likely to have only rarely been applied.

In 1236, the next legal mention in a Canterbury ecclesiastical statute was the request to cut a child believed to be alive from the mother's womb if she died while giving birth. In 1310 at the Synod in Trier this is formulated, but at the same time explicitly ordered: "If one can assume that the child has already died in the womb, the latter cannot be opened [...]".

In the Middle Ages, the caesarean section became an integral part of the lives of heroes and saints. Saint Raimund Nonnatus , patron saint of pregnant women, wet nurses and children, for a happy delivery and against puerperal fever , was nicknamed (Latin non natus "not born") because he is said to have been born through a caesarean section.

There are now indications that a Caesarean section that was successful for mother and child was performed in Prague in 1337.

Until modern times , however, the caesarean section was almost always associated with the death of the mother. Normally it was therefore only performed on the dead, for example in order to be able to properly bury the child.

In 1876 the Italian obstetrics professor Edoardo Pòrro reported on the operation named after him, in which the uterus and ovaries are removed during a caesarean section.

Surgical scar from a Pfannenstiel incision with surgical staples

On September 25, 1881, Ferdinand Adolf Kehrer performed the first conservative classical caesarean section in Meckesheim . This caesarean section method, in which the abdominal wall and the uterus are not cut open from top to bottom, as was usual up to now, but transversely and then the uterus is firmly sewn to the peritoneum cover, was groundbreaking and is based on the modification of Hermann Johannes Pfannenstiel , according to which this technique the opening of the abdominal wall is also named, still used everywhere today. In 1882, Max Sänger introduced a two-layer suture closure for the uterus. In 1895 Alfred Dührssen reported on the vaginal caesarean section (the Sectio vaginalis ). 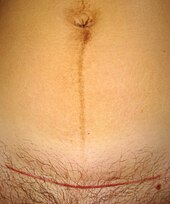 Thanks to improved surgical techniques, the introduction of asepsis , advances in anesthesia , blood transfusions and antibiotics , it was possible to reduce maternal mortality from caesarean sections, which was over 80% in the 1880s, to 0.04 ‰ in 2005. In recent years, the caesarean section has therefore increasingly “competed” with natural birth as a birth mode (cf. the discussion under the heading of the preferred caesarean section ). In some private clinics in Brazil, for example, the caesarean section rate is now over 70%.

The Vienna Declaration of Principles on Spontaneous Birth was presented at a symposium in June 2018 . Health City Councilor Hacker named the preliminary goal of reducing the rate of Caesarean sections from 30.4% by 2025 to 25%. Advice and education for pregnant women and training of medical staff should work in this direction.