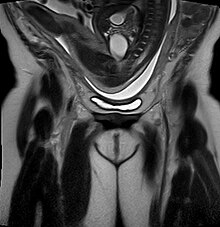 The breech position is an irregularity (deviation from the norm) of the child position (pole position) before a birth , in which not the head but the pelvic end of the unborn child precedes. The child's head is located on the fundus uteri , the tip of the uterus (upper edge of the uterus); the child lies in the womb with its head “up”. The leading part is the rump - hence it is called a breech birth .

The incidence of breeches in all pregnancies to term is 3–5%, while in 21–24. At the week of pregnancy, around a third of children are in breech position. Previously, the frequency was given as 3%, but the increasing proportion of premature and multiple births has contributed significantly to the increase in the frequency of breeches.

In about 50% of cases, the cause of a breech position cannot be reliably identified. In more than 50% of breeches, the mother gives birth to first child; In a Norwegian study, a genetic connection could be shown: Men and women who were born as breeches themselves had a breech child more than twice as often (exactly 2.3 times as often) compared to parents who were themselves Cranial position were born.

Possible child factors for breeches are premature birth, multiple pregnancies, too much or too little amniotic fluid, malformations (e.g. spina bifida ), deviations from the regular head shape, lack of internal tension (e.g. in the case of intrauterine fetal death) or if the umbilical cord is wrapped or not . An umbilical cord that is too short, deep seat of the placenta , incorrect position of the placenta ( placenta praevia ).

Possible maternal factors for breech position include certain forms of the pelvis , genital and pelvic tumors or malformations of the uterus.

In order to bring the child into a proper position ( skull position ), the parents should be made aware of the possibility of external turning , which is possible from the 36th week of pregnancy. An experienced obstetrician rotates the fetus from the breech position into the skull position by applying pressure from the outside. However, the procedure has the following risks: umbilical cord complications , premature placenta detachment, fetomaternal transfusion, vaginal bleeding, antenatal intrauterine fetal death . Moxibustion , acupuncture or special postures are mentioned as further methods, the effectiveness of which has not been proven .

When deciding which birth route to choose (caesarean section or birth through the birth canal ), various factors are taken into account.

The following criteria speak in favor of vaginal birth: the simple breech position, gestation age of more than 34 weeks, no indications for caesarean section due to other diseases of the mother or child, pelvic dimensions within the range of normal, multiparous women, the mother has already given birth to a breech-born child and previous births with birth weight greater than the estimated current weight.

The final decision is made by the expectant mother after detailed advice from the medical obstetrician.

A spontaneous breech birth is particularly feared as a risk to the child. The maternal risk is higher with a caesarean section. The main fear is a hypoxic risk (insufficient oxygen supply) for the child, since the umbilical cord is compressed more frequently and earlier than in the case of the skull and umbilical cord incidents occur more frequently. Childbirth injuries to the skeletal system and the peripheral nervous system (upper arm and clavicle fractures, hereditary Duchenne paralysis ) are also feared . During childbirth, obstetricians fear above all that the arms will be turned up, as this will hinder the birth of the head and the arms must first be released manually, the complications mentioned above can occur as a result of arm loosening. A muscular wry neck ( torticollis ) also develops in 50–70% of children born in breech position .

The experience and practical and technical skills of the obstetrician have a major influence on the “fetal outcome”.

The birth management in the vaginal breech birth is conservative, i. H. Invasive procedures such as amniotomy (opening of the amniotic sac) are avoided. The obstetrician only becomes active after the trunk is born. The exit of the head can be accelerated by supporting hand movements such as the one according to Veit-Smellie and the Bracht handle in order to keep the possible undersupply of the child as short as possible. In the case of a four-legged birth , the child develops without outside help; as a rule, there is no need to use any supportive movements. For this reason, this maternal birthing position is particularly recommended for spontaneous breech births.

Breeching birth is one of the risk factors for hip dysplasia in newborns.