This article or section needs to be revised. Details should be given on the body weight of animals. Please help to improve it , and then remove this flag.

The body weight , body mass actually is a biometric feature and refers to the physical mass of a human (or animal), usually expressed in kilograms (kg). It is lowest shortly after birth and then increases steadily along with body size until adulthood with normal development.

Many people, especially in developing countries, are underweight because they don't have enough to eat. Obesity (or its severe form, obesity ) is a common problem that has increased sharply in developing and developed countries.

Also, eating disorders can cause underweight (z. B. anorexia and bulimia ) or lead to obesity (z. B. binge eating ).

Overweight women are more likely to suffer from gestational diabetes . Then your blood contains too much sugar. The baby stores the sugar in its organs in a modified form. Although the children grow, they remain immature and often do not achieve the necessary performance.

Body weight can be measured quickly and easily using a scale . A quantitative assessment of body weight in relation to body size is considered problematic. A number of indices have been developed for this purpose over the past 150 years.

The Broca index is a measure for calculating the "normal weight" of a person. It was developed by Paul Broca , a French doctor , surgeon and anthropologist (1824-1880).

Based on the height (in cm ), the index defines a normal weight (in kg ) according to the formula:

In the second half of the 20th century, an “ideal weight” of only 90% for men and only 80% for women of the value calculated above was often assumed, but more for aesthetic than medical reasons.

The Broca index allows only a rough estimate and is best for the medium height range; For very tall and very small body sizes, the BMI is somewhat more precise (a limit value analysis can illustrate the limitation: How much can a person with 1 m body size according to Broca weigh? The Broca ideal weight is too low for very small body sizes and too high for very large ones ). From a graphical point of view , the Broca ideal weight is a straight line, depending on body size, the body mass index is a slightly curved curve (parabola).

Because particularities of the respective body structure are not taken into account, both the BMI and Broca index are limited in their informative value; For example, a bodybuilder has a very low percentage of body fat, but may have a BMI of well over 25 due to his high muscle mass.

The advantage of weights calculated according to Broca is that a person who thinks metrically can calculate them in his head.

This is compared with - depending on the source, gender or age-dependent - standard values.

Since it is naturally impossible to differentiate between fat and muscle mass when measuring body weight, the determination of the BMI is often combined with a measurement of the body fat percentage . Nominal overweight in combination with a low body fat percentage indicates a muscular person rather than health-endangering fat. However, it should also be remembered that the load on the hip and knee joints and the lumbar spine is only determined by the weight, regardless of whether the weight comes from shoulder and arm muscles or from abdominal fat pads.

The Ponderal Index is similar to the BMI. His formula is:

Values ​​between 11 and 14 kg / m 3 are considered normal. This index of the dimension of a mass density almost fulfills the conditions of a dimensionless number of the similarity theory , since it is dimension-analytically independent of the body size and therefore also applicable for children and very tall people. The Ponderal Index is, however, not widely used.

As a further simplification of the waist-hip ratio , the pure waist circumference , regardless of body size, is used as an indicator of overweight. Because of its simplicity, this method is still favored by many doctors.

The waist-to-height ratio (WHtR), i.e. the waist-to-height ratio, has been discussed since around 2010, which could have a future because of its advantages over the above-mentioned methods for determining healthy body weight. It describes the relationship between waist size and body size and thus also makes a statement about the distribution of body fat and allows greater informative value with regard to the health relevance of obesity (cf. study by Munich Ludwig Maximilians University with over 11,000 test subjects).

The main advantage of the WHtR compared to the BMI is that the BMI only allows a small amount of information about the health-relevant causes of being overweight or underweight , since, for example, very muscular men have a high BMI. 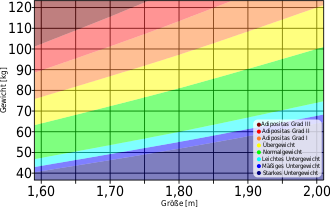 There is no medical consensus as to what the “desirable” or “natural” body weight of a person should be, to be described as normal. It is even debatable whether there is such a value to be determined. In this respect, there are various measurement formulas for determining normal or ideal and under or overweight, which result in similar values. Despite this discussion about the correct value of a normal or ideal weight, there are clear ideas about outside which weight range a person should be judged as (pathologically) underweight or overweight.

In addition to the usual calculation methods, quantiles (for under / overweight) or the median (for the ideal weight ) of empirically obtained distributions of the body weight of a population group are also used for assessment .

A current report by the WHO uses the BMI and defines normal weight with a BMI of 18.5–24.9.

A recent report by the World Health Organization (WHO) uses the BMI and defines underweight with a BMI of less than 18.5.

Underweight (as a result of malnutrition) is often associated with an inadequate supply of protein , fats and carbohydrates as well as vitamins and minerals . The skin and hair change, the bones can decalcify and the muscles shrink. In addition, some organs can no longer do their job properly because of a lack of nutrients .

A WHO report from 2000 uses BMI to define obesity as follows:

The health assessment of these limit values ​​is, however, inconsistent among experts. Obesity is a risk factor for various diseases (e.g. heart attack , stroke , diabetes mellitus ). Regular exercise and moderate food (especially low in fat and low in carbohydrates) can reduce body weight.

Some highly regarded but controversial publications suggested that the stated values ​​should be reassessed. According to this, a BMI of 25 to 30 is beneficial for physical health, since people who are slightly to moderately overweight live longer on average, for which the term “obesity paradox” was coined. With some diseases, a higher fat reserve could be beneficial (for example, during surgery or severe infections ). From a statistical point of view, what is called overweight / pre-obesity is the ideal weight, since it is the weight with the highest life expectancy . For example, according to an Israeli long-term study on 10,000 men over 40 years of age, men who are slightly overweight (BMI 25 to 27) have significantly better prospects of longevity than men of normal weight. If you are very overweight (BMI> 27), life expectancy decreases again.

Two publications from 2009 and 2010, in which a large number of studies and meta-analyzes were compared and assessed, show that being slightly overweight is disadvantageous for susceptibility to some diseases and beneficial for others. It also depends very much on where the body fat is stored, if it is in the abdomen ("apple-shaped" figure), this increases the risk of cardiovascular diseases and diabetes . Fat on the buttocks and thighs ("pear-shaped" figure) can protect against precisely these diseases. However, according to current knowledge, the distribution of fat in the body is genetically determined and therefore cannot be influenced, and the risk of osteoarthritis in the joints of the lower extremities is increased by weight, regardless of the fat distribution. The publications mentioned by no means went unchallenged in the professional world.

However, the most comprehensive meta-analysis to date, published in 2016, found that the thesis of “healthy obesity” was not tenable. The “obesity paradox” does not therefore exist; overall mortality is said to be increased in overweight and obese people. Previous studies have not taken into account that some chronic diseases, smoking etc. reduce weight, but increase mortality and thus distort the statistics.