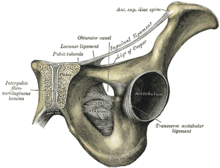 Side of the human pelvis. The pubic symphysis is cut and is on the left in the picture.

In humans, there is a disc ( discus interpubicus ) between the bony parts , which keeps the connection flexible. This is very important in childbirth . During pregnancy, this fiber-cartilage connection becomes more flexible under hormonal control . In an estimated one in 600 pregnant women, this loosening is too strong and a so-called symphysis loosening occurs , which is very painful. During delivery, the symphysis can be overstretched (symphysis dehiscence) or even tear ( symphysis rupture , symphysis rupture ), which also leads to severe pain.

It is not yet known which treatment is the most effective. Training of the pelvic stabilizing muscles , water aerobics and trochanter belts have proven effective .

A surgeon can also help if conservative medicine is not helpful. A stiffening of the joint by means of one / two metal plate (s) and a few screws, possibly with the help of your own bone chip from the iliac crest, can restore stability and at least largely alleviate the discomfort, possibly even completely recover.