The title of this article is ambiguous. For the vehicle see trucks , for the jazz musician Andy Laster .

The vices (from Old High German lastar for "shame" or "error"), originally actually unsuitability and inadequacy , is a bad habit, is dominated by anyone. Often it also describes a dissolute way of life.

Vice is an ethical evaluation of human behavior which - in contrast to virtue - is seen as harmful to the individual or the community. A possible pathological root of the misconduct is deliberately not pointed out (e.g. alcoholism as a disease ), but its moral reprehensibility is named.

In a broader sense, vice is the opposite of virtue. In the narrower sense, "the inclinations and directions of will that have degenerated into passion, exceed the natural measure". This is often expressed in German with the morphemes "Sucht" and "Greed": lust for power, contentiousness, greed, greed for money etc.

What is viewed as a vice is highly dependent on the collective opinion within a group and the cultural or religious character of the societies. Some common Western behaviors, such as B. the relatively free interaction of the sexes with each other, in Islamic or Far Eastern societies rated as vicious.

Hieronymus Bosch : Representation of the seven main vices and the four last things on a table top.

The oldest description of the struggle between virtues and vices that is still known today is an epic from the 5th century , the Psychomachia of Prudentius . The virtues (e.g., faith , chastity , humility , hope , reason , patience , moderation , charity and unity) fight in seven different battles with the vices (e.g., superstition , lust , anger , pride , deceit, licentiousness, Greed , discord ) and defeat them. 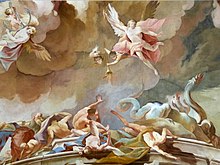 The history of vice begins, according to old catalogs, in the Egyptian desert . Evagrius Ponticus (345–399), a learned anarchist of the 4th century, developed an octagon catalog based on Neoplatonic and Gnostic elements. Evagrius understood the eight vices gastrimargía (lust for the palate), porneía (fornication), philarguría (greed for money), lúpe (sadness), orgé (anger), akedía (indolence), kenodoxía ( lust for fame) and huperephanía (pride) as 'bad thoughts', who used demons to distract hermits from their goal of attaining apatheia . This pattern of vice was adopted by Johannes Cassian (360-435) and passed on to the Latin West.

Two centuries later, Pope Gregory the Great's (~ 540–604) doctrine of vice underwent a fundamental change in his moralia in Job . Gregor probably knew Cassian's catalog of vices, but only accepts seven main vices, with pride ( superbia ) being superordinate to these main vices as regina or radix , from which the other vices spring. Furthermore, Gregory introduces envy ( invidia ) as a new vice and combines acedia and sadness ( lúpe , tristitia ) into a single vice, tristitia .

Gregor's catalog of vice had an influence on Christian literature in the West that could hardly be overestimated, and this catalog was often combined with that of Cassian. In the 12th century, the various models were standardized and a slightly corrected version of the Gregorian vice catalog with seven trucks prevailed.

The seven vices pride (superbia) , envy (invidia) , anger (ira) , indolence (acedia) , greed (avaritia) , gluttony (gula), and lust (luxuria) have been in a great abundance of theological treatises since the 12th century , pastoral writings (sermon manuals, books of penance, etc.) and literary works. The triumphant success of this catalog of vice lasted until the 15th century and then gradually disappeared, although it was never forgotten. If today the seven main vices are remembered, then primarily a medieval doctrine is meant, which shaped the scholarly discussion, especially in the 12th to 15th centuries, and also influenced everyday life.

The representations of vices and virtues are an important source for the description of human passiones ( passions ).

According to the philosopher Otfried Höffe , Immanuel Kant's allegations, which he pragmatically described as vice in his anthropology in 1798, are directed against internal barriers, especially against laziness and cowardice . As far as laziness is concerned, according to Kant one is too easy to take on the arduous business of thinking for oneself. Regarding the second vice, cowardice, that is, lack of courage, he indirectly calls for courage to be mustered in accordance with the insight that the call is already half as much as to instill it. Kant names falsehood as a third vice.