Headquarters of the National Library 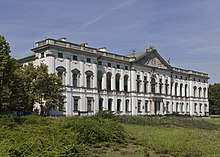 The Biblioteka Narodowa w Warszawie (BNW; German  National Library in Warsaw ) is the Polish national library . It reports to the Ministry of Culture and National Heritage. Its headquarters are in Warsaw , Aleje Niepodległości 213, the special collections are kept in the Krasiński Palace , plac Krasińskich 3/5.

Its collections include all books and magazines published in Poland as well as publications on Polish affairs published abroad. She receives deposit copies of all publications.

It is the most important humanistic research library, the main archive of Polish literature and the state center for book information. The library also plays an important role as a research center and is the leading methodological center among other Polish libraries.

The Krakow Jagiellonian Library also has the status of a national library .

The first Polish national library , the Załuski Library , was established in the second half of the 18th century. It was founded by the Warsaw bishops, the Załuski brothers, and taken over by the National Education Commission in 1774 . As a result of the decision of the Sejm, since 1780 the library had the right to a deposit copy of all books that were printed within the borders of the Polish state at that time. The Załuski inventory was confiscated by the Russian troops of Tsarina Catherine II and brought to St. Petersburg . So it became a fundamental part of the Imperial Public Library, which was founded in 1795. The components were destroyed during the transport to Russia , many books were stolen at that time.

For this reason, when Poland regained its independence in 1918, no central institution was suitable as a national library. On February 24, 1928, the Biblioteka Narodowa was built in a modern form according to the decree of President Ignacy Mościcki . The library was opened in 1930, at that time it contained 200,000 volumes. Its first director was Stefan Demby , from 1937 Stefan Vrtel-Wierczyński . The library holdings grew rapidly; B. handed over all the books and manuscripts of the Wilanów Palace in 1932, d. H. about 40,000 volumes and 20,000 pictures from the SK Potocki collection.

In the beginning the library did not have its own building, which is why the library holdings were stored in different locations. The main reading room was located in the newly built library building of Szkoła Główna Handlowa . In 1935 the special collections were housed in the Potocki Palace . A new building suitable for library purposes was planned in the area of Pole Mokotowskie , as part of the conceptual government district. However, construction could not be started because of the outbreak of World War II .

In 1940 the authorities of the General Government took over the collections. With the German-language books, they set up a library accessible only to Germans in the building of the closed Warsaw University. The most valuable special collections were stored in the Krasiński Palace.

After the Warsaw Uprising was put down in October 1944, these collections were set on fire by German special forces and almost completely burned. 80,000 old prints, including valuable Polonica from the 16th to 18th centuries. Century, 26,000 manuscripts, 2,500 incunabula, 100,000 graphics and engravings, 50,000 musical notations and the materials related to theatrical activity were destroyed. It is estimated that of over 6 million volumes in Warsaw libraries in 1939, 3.6 Millions were lost. Most of it belonged to the Biblioteka Narodowa.

The library resumed its activities after 1945. The collections that were looted and were located in Germany and Austria and parts from the libraries of the Krasiński Majorat and the Przezdziecki Majorat came back to Poland. Kazania świętokrzyskie , Psałterz floriański and the manuscripts of Fryderyk Chopin did not return from Canada until 1959.

The objects include 151 maps from the Codex Suprasliensis , which was included in the UNESCO World Document Heritage Register in 2007 .

In 2012 the Library Authority signed a contract that included 1.3 million records from the Polish library in WorldCat .