Clifford Lee Burton was born to hippie parents Jan Burton and Ray Burton from Tennessee . He had two older siblings, Connie and Scott. He attended Castro Valley High School and College in San Francisco, where he took music classes.

His first instrument was the piano . This should influence his later playing style on the bass. In contrast to many other rock bassists, he did not play with a plectrum , but only with his fingers, which later became his trademark because he had comparatively very fast fingers. He also used some guitar techniques such as tapping or harmonics. The piano also influenced his taste in music, which ranged from the Misfits , Black Sabbath , Jimi Hendrix and Motörhead to Ludwig van Beethoven and Johann Sebastian Bach .

He started playing the bass in 1976. He often played with a few friends who called themselves EZ Street . They played many cover versions and, according to their own statements, strange original compositions.

After graduating from high school in 1980, he joined the heavy metal band Trauma , of which he was a member until 1982. Metallica members who were looking for a successor to bassist Ron McGovney were also present at a Trauma concert . They were very intrigued by his version of the bass solo Anesthesia (Pulling Teeth) so they offered Burton to join them.

Burton played on the albums " Kill 'Em All " (1983), " Ride the Lightning " (1984) and " Master of Puppets " (1986). According to one anecdote, the title of the first album came from Burton himself. After meeting record bosses who didn't like the original title, "Metal Up Your Ass!", He said curtly, "Kill all the fucking record distributors. Just kill 'em all, man !!! "(translated:" Kill all damn record distributors ... just kill them all, man ").

Cliff Burton was one of the first bassists to experiment with distortion and wah-wah effects in their bass playing . His playing was unusually virtuoso.

The band says to this day that Burton was the most musical member of the group. His influences, which were classically inspired among other things, can be heard clearly on the first three albums; he also worked on songwriting.

Examples of his distinctive style are:

The piece To Live Is to Die (on ... And Justice for All ), which was indeed published after his death, contains many written by Burton riffs. The text consists entirely of a poem by Burton:

With the album "Master of Puppets" Metallica achieved their final breakthrough, which among other things brought them the place as opening act on Ozzy Osbourne's tour in the spring of 1986. In the summer / autumn of this year the band went on a European tour. 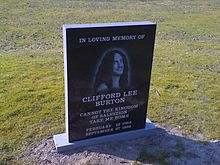 Memorial stone near the accident site

On the way from a concert in Stockholm to Copenhagen , the Metallica tour bus in Dörarp, north of Ljungby , Sweden, got out of control in the early morning hours of September 27, 1986 and fell on its side. Cliff Burton, who was sleeping at the time of the accident, was thrown through a bus window and buried under the overturning vehicle. Drummer Lars Ulrich broke his toe, tour manager Bobby Schneider dislocated his shoulder.

The driver of the bus testified at the scene of the accident that the bus had skidded due to ice on the road. Guitarist and singer James Hetfield walked back a short distance but couldn't find any ice. Among other things, he said that the driver's breath smelled of alcohol. The driver went to court but was acquitted.

Cliff Burton died at the age of 24. In the California rock scene, his death was received with great dismay. The band Anthrax and the producers of the album "Kill 'Em All", John and Marsha Zazula, placed double-sided obituaries in the rock newspaper Kerrang! . Other magazines and musicians also paid tribute to the late bassist. The Megadeth -head and former Metallica guitarist Dave Mustaine dedicated Burton titled "In My Darkest Hour". The Anthrax album Among the Living is also dedicated to him.

Burton's body was cremated and his ashes scattered in his favorite spot, Maxwell Ranch. The instrumental piece "Orion", largely written by Burton, from the album "Master of Puppets" was played at the ceremony.

After the death of their bass player, the rest of the band collected video recordings of their concerts, which were made available to them by fans from all over the world. In addition, there were TV recordings and private recordings from the three and a half years with Cliff Burton as bassist at Metallica. Since Metallica still allowed fans to make recordings and recordings at their concerts at the time, a lot of material was collected from which the 90-minute video compilation “ Cliff 'Em All! " originated. It was the first video that Metallica released.

The Aria Pro II bass Cliff Burtons gained particular fame due to its rarity. Exactly which model of the company he owned is not known, as the models were very similar to one another, and Burton himself never mentioned which model it was exactly. However, the company now sells a kind of new edition of the bass. Rather, it is a simple signature instrument based on the characteristics and design of the bass. These are the Aria Pro II SB-CB and Aria Pro II SB-CB 1000 models.

Except for the demo from 1982, all works with Metallica have been released on Megaforce Records .