Interior view of the Jesuit Church in Antwerp , around 1630, Kunsthistorisches Museum Vienna

The exact date of birth of the artist is unknown, he was baptized on January 22, 1573 in the Church of St. James in Antwerp. According to Karel van Manders Schilder-Boeck , he was a student of Adam van Noort . The obligatory trip to Italy for Flemish painters of his time to deepen their education took place in 1597. The impressions of this trip were later reflected in the representation of ancient ruins and Roman buildings. The artist became master (master's son ) of the Antwerp Guild of St. Luke in 1600/01 and co-dean in 1611, and chief dean in 1612. In 1612 he married Maria Pamphi. From 1607 Vrancx was a member of the rhetorician chamber of the " Violieren ", where he played an important role. In 1610 he was accepted into the brotherhood of the Romanists, from 1621 to 1631 he was captain of the Antwerp militia.

The Kranenhoofd on the Scheldt in Antwerp , 1622, Rijksmuseum, Amsterdam.

Vrancx often painted small figures of society in park landscapes, outdoor folk scenes, fairs and the like. Often these representations are part of biblical stories or religious allegories . Pure depictions of landscapes , especially with Roman ruins, have also come down to us. Occasionally Vrancx also painted interior views of churches. Some of his depictions were reproduced by contemporary engravers such as Cornelius Galle the Elder , Wenzel Hollar , Pieter de Jode the Elder , Jakob Matham , Matthäus Merian , Michiel Snyders, Philippe Thomassin and others.

Vrancx was friends with the contemporary artists Jan Brueghel the Elder , Hendrik van Balen the Elder and Frans II Francken . He was a highly productive artist, numerous works by his hand are available in the famous museums and galleries in Europe. Sebastian Vrancx died at the age of 74 years in his hometown Antwerp, which was quite old for his time.

Founder of the Flemish military genre 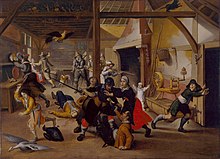 Vrancx became particularly well known for his depictions of battles; he is generally considered to be the inventor of battle painting in the Netherlands and the founder of the Flemish military genre. His specialty was the representation of equestrian combat, the attack on a convoy or the sacking of a village. Starting from Flanders , these themes spread not only in the southern Netherlands, but also in Holland , Italy and Germany, and so the themes of military life were taken up again and again in innumerable variations by the masters of this genre. With Vrancx there are never closed, compact military formations, characteristic of his style is much more the even distribution of figures of the same size over the picture surface.

The people in Vrancx's pictures follow the Flemish ideal of figures of somewhat stocky bodies, the faces are not very individualized and above all express the brutality and fear of the fighters. Vrancx paid particular attention to the design of the costumes and the armament of his characters, which follow contemporary fighting techniques. Vrancx does not offer the viewer any large movements in the picture, but rather dissolves the picture into anecdotal individual scenes that represent the event in their entirety. In order not to let the painting disintegrate into this myriad of individual scenes, the picture is usually framed by groups of trees on both sides - as it were within the image. Sebastian Vrancx worked with Jan Brueghel the Elder, with Brueghel being responsible for the landscape and Sebastiaen Vrancx for the figures. Vrancx's style was adopted and further developed by his pupil Pieter Snayers . Snayers was not only one of the main masters of the so-called analytical-topographical battle picture, he also followed his teacher Sebastiaen Vrancx in the military genre.