Entrance gate to the abbey

The St Augustine's Abbey in Canterbury was 597 or shortly thereafter by Augustine of Canterbury founded and is the first monastery in southern England and the first foundation of the Benedictine outside continental Europe. Since 1988, the abbey has been a UNESCO World Heritage Site along with the cathedral and St. Martin's Church in Canterbury .

Augustine was a monk of the Benedictine Abbey of St. Andrew on the Caelius Hill in Rome , which was founded by Gregory I a few years before his election as Pope . However, as David Knowles points out, there are some justified doubts that St. Andrew strictly adhered to Benedict's Rule , as it was quite common at the time to provide this rule with its own additions that, for example, emphasize the liturgy .

After Gregory became pope, he received a request from King thelberht of Kent to send missionaries to him. Gregory then gave Augustine and other monks of St. Andrew's Abbey the order to move to England, where they arrived in 597. For the accompanying monks, Æthelberht had a church dedicated to Peter and Paul built, which then belonged to the newly founded monastery. The monastery became the burial place of the Kings of Kent and the Archbishops of Canterbury.

The connection with Italy was also maintained later. So Wilfrid , originally a monk from Lindisfarne , and his friend Biscop traveled to Rome from Northumbria . Biscop then stayed for two years in Lérins Abbey on the island of Saint-Honorat , where he got to know the monastic life according to Benedict's Rule. Later, on his second trip back to Rome, Pope Vitalian sent him back to England with Theodore of Tarsus , the future Archbishop of Canterbury. Upon arriving in Canterbury in 669, Biscop became abbot of the abbey and introduced the Rule of Benedict, with particular emphasis on the liturgy and study. After two years, Biscop traveled to Rome one more time and after his return he founded the Benedictine monasteries Wearmouth (674) and Yarrow (685) in his home in the north. This was the starting point of a development in which the Benedictine abbeys in England flourished, which culminated in the 8th century when parts of continental Europe were evangelized from England (such as by Boniface ) and Willibald , an English Benedictine monk, even helped the ancestral monastery of the Benedictine Montecassino to a spiritual renewal.

In 978, the church and with it the monastery were dedicated to the now canonized founder and first Archbishop of Canterbury, Augustine.

The Grangie Salmstone belonged to the abbey . In 1027 the Benedictine Abbey Minster was added to by King Canute the Great St. Augustine. In 1137 Abbot Hugh founded the St. Laurence Hospital , which included a chaplain , a manager and 16 brothers and sisters. The management of the hospital later passed to a prioress. In 1535 there were seven sisters and a priest working in the hospital alongside the prioress.

The abbey later had quite a few monks, despite the arrival of the Cistercians ( Waverley was founded in 1128 ). In 1146 the monastery had 61 monks. The number later rose to 84 in 1423. Prior John Dygon also became known as one of the few composers of the Tudor period .

At the time of the dissolution caused by the Reformation on July 30, 1538, there were 30 monks in addition to the abbot. The last abbot did not oppose the dissolution, but instead tried to find the best possible agreement with Thomas Cromwell that would provide the best possible care for his monks and himself. The St. Laurence Hospital was not dissolved until 1557 and at that time had only two sisters besides the prioress.

Ruin of the nave

As excavations show, this first church, or at least one built in early Christian times, was a Byzantine-type basilica shortened to a square structure , as can still be found today at Trier Cathedral and was not uncommon in Rome at the time. The Byzantine style also included a vestibule on the west side. The excavations show that this early church, like that of Reculver , had such a vestibule on each of its four sides. Braun suspects that this served to improve weather protection.

From the cloister from the 10th century and thus the oldest in England only the foundation walls are preserved. In contrast to what is customary in northern countries, the cloister was north of the church. Around 1100 the church was rebuilt according to the models of French architecture with an apse and three apses arising from it. 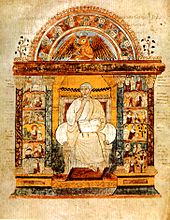 Page 129v of the Gospel Book which St. Augustine brought to Canterbury from Italy. It represents the evangelist Luke .

The abbey had a very extensive library, of which more than 250 manuscripts have been preserved to this day. The holdings are now widely spread across just under thirty libraries, of which the British Library , the Bodleian Library at Oxford University and no fewer than six colleges at Cambridge University have larger sub-collections. Quite a few manuscripts are outside of England. A copy of a work by Gervasius von Tilbury from St. Augustine is in the Herzog August Library in Wolfenbüttel .

Augustine laid the foundation for the library when he took several volumes from Italy to Canterbury. This included in particular a book of the Gospels by Italian hands from the 6th century. The book is now part of the collection of Corpus Christi College in Cambridge. It is still linked to Canterbury, however, as the Archbishop of Canterbury takes his oath of office on it. Other holdings from the early Middle Ages include an 8th-century gospel owned by the British Library, but a sheet of paper has been torn off for Canterbury Cathedral .