The title of this article is ambiguous. Further meanings are listed under Bethesda (disambiguation) . 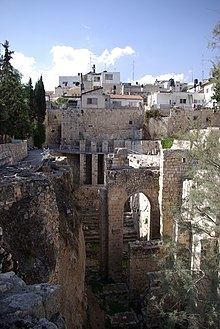 Bethesda is the name of a Jerusalem cistern that has also been said to have healing powers.

The name Bethesda translates as House of Mercy in the Biblical Dictionary . The form of the name, which has been questioned on various occasions , has been confirmed by the copper scroll of Qumran . There the pond system - in the dual form to Bethesda - is called beijt-eschdatajin . The smaller basin is also mentioned in the Qumran copper scroll .

Already in the pre-Hasmonean period, a cistern was built near the shaft gate by walling up a small basin. In the 1st century BC Another basin south of the first basin was created with a second dam. A manhole and channel system, which made it possible to channel water from the rear basin past the front basin without mixing, indicates different water quality in the different basins. In addition, the nickname “sheep oak” at least suggests that the water was also used to clean the herds of animals driven through the gate to the temple. Due to the increasing overbuilding of the area, however, the cisterns lost their importance until the reign of Herod the Great and gradually silted up.

In the 1st century AD, instead, the cultic veneration of Bethesda water increased. While biblical findings (see below) suggest a cult shrine for the first half of the 1st century AD, archaeological evidence is only available from the time after the destruction of Jerusalem in AD 70 ( Jewish War ). Remains of a sanctuary of Serapis / Aesculapia are preserved from this period immediately east of the cistern basins, in which several small bathing rooms are arranged around a central water reservoir, into which the water was directed. In addition, votive offerings show that people actually believed they were healed by this water.

In the Byzantine period in the 5th century, the basins were vaulted with arches and a three-aisled basilica was built on top of them . Only remnants of this church and its successor churches have survived. While at least for the Byzantine basilica, due to its location above the ponds, a special commemoration of Jesus' miracle of healing can be assumed , the St. Anne's Church , built by the Crusaders east of the basin in 1142, is an expression of the piety of Mary.

In 1856 the entire area - the ponds and the St. Anne's Church - was bought by Sultan Abdülmecid I, Napoleon III's ally of the Crimean War . left. France transferred the management of the site to the White Fathers in 1874 . 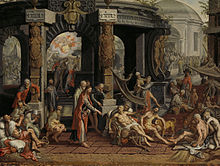 In the Christian New Testament , Bethesda is one of only two places in Jerusalem where Jesus of Nazareth does a miracle. This healing miracle can be found in Johannes Joh 5,1-15 EU : According to this, "a lot of sick, blind, lame, drought" ( Joh 5,3  EU ) are said to have been lying  in five columned halls around the pond , waiting for " an angel descended into the pool and [...] moved the water. Whoever stepped in first after the movement of the water became well, whatever illness he was afflicted with. ”( Jn 5,4  EU ) There Jesus met a man who had been paralyzed for 38 years and who did not enter at the right time due to his handicap the water could get. On the simple command "Jesus said to him: Get up, take your couch and go!" ( Jn 5,8  EU ) the man could walk again. However, because Jesus performed this miracle on the Sabbath , he incurred the wrath of the Jews ( John 5 : 9-16  EU ).

The miracle described here can be classified historically and critically in the category of surpassing miracles. Jesus turns out to be more powerful than Old Testament or (in this case) pagan miracle workers. It should be noted in this context that the healing work of Jesus and the eventual recovery of the sick person is no longer related to the water, but only takes place through the word. The description of the healing on a Sabbath places the story in the context of the so-called "Sabbath conflicts" in which Jesus deals with the Sabbath commandment in the Torah and its interpretation.

Although the historicity of the Jesus' miracles cannot be proven, the report at least suggests a precise knowledge of the locality. The “movement” of the water could have been caused by the fact that water from the central basin was led into the individual basins with a surge using a lifting device.