Serapis (also Sarapis ) was an Egyptian - Hellenistic god who was established as an integrative imperial god since Ptolemy I. In it are v. a. Features of the Egyptian deities Osiris , the Apis bull (who dies in the cult of Memphis and becomes Osiris), as well as the main Greco-Roman gods Zeus - Jupiter and Hades - Pluto merged.

The name arose from the names of Osiris ( Sir / Sar ) and Apis ( Hepi ). In Egyptian mythology , the Apis bull embodied fertility as a symbol . According to tradition, the soul of Osiris lived on in the Apis bull after Seth had cut his body into several pieces.

Origin of the Serapis cult

The Serapis cult originated in early Hellenism , when Egypt came under Macedonian-Greek rule. The exact time of the introduction is unclear, but a dream vision of King Ptolemy I in Sinope is said to have been the reason to commission the Egyptian priest Manethon and the Eumolpid Timothy with the birth of Serapis.

Initially, the cult of Serapis was only intended for the Greek population of Egypt in order to unite Greek and Egyptian traditions. The admission into the Egyptian pantheon , combined with the veneration of Serapis and his wife Isis , was achieved by Ptolemy I with the completion of the Serapeum of Alexandria in 285 BC. Achieve that he was from 287 to 286 BC. Was built. 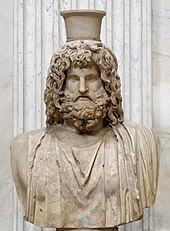 Serapis bust in the Vatican

The external appearance was mainly adapted to Zeus , since the representation as a mummified deity did not correspond to the ideas of the Greeks . Most of the time, Serapis was seen as a bull or a seated, bearded man. As the god of fertility and his importance of the grain supply, he wears a kalathos , a Greek harvest basket, on his head , wrapped in ears . The depiction refers to the idea that the gods of the underworld made the grain grow out of the earth. Serapis was therefore also the patron god for the fertility of the fields and the grain supply of the cities (compare Cura annonae in the Roman cultural area). Other depictions show him as a standing man with a bull's head or with Asclepius' snake staff . In addition to his role as god of fertility and healing, Serapis was also endowed with the functions of oracle and slave liberator. With these characteristics, Serapis developed into the universal and protective god of the Ptolemies .

As the god of the Nile flood, he combined the characteristics of other Greek gods in addition to Osiris: Hades , Zeus, Helios , Dionysus and Asklepios. In the Jewish religion , YHWH embodied the Egyptian Osiris in the form of Serapis as god of the flood of the Nile .

Although the deities Zeus and Osiris merged, both gods continued to exist individually even during the Hellenistic-Roman period. Under Ptolemy III. the Isis cult, which had been of secondary importance until then, experienced a significant upgrade in connection with the Canopus Decree and pushed Serapis into the position that Isis previously held.

The Serapis cult spread - together with that of Isis  - quickly in the entire sphere of power of the Ptolemies, who controlled not only Egypt, but also parts of Asia Minor and the Aegean . Around 220 BC BC there were already three serapes on Delos , and the Serapis temple in Lindos on Rhodes was also famous ; the cult is also documented in Athens, Corinth and Sparta, among others. Cicero also mentions a temple of Serapis in Syracuse (Verr. II, 2, 160), in front of which a Verres statue was overturned.

At the latest in the 1st century BC There was also a temple for Serapis in Rome; Emperor Caracalla (211 to 217) then had a large sanctuary built for him on the Quirinal . Maximinus Daia (305 to 313) apparently tried to promote Serapis as a competitor to the Christian God ; but after the introduction of Christianity as the state religion, the emperors from Theodosius I (379 to 395) took action against the other religions, including Serapis: the great temple in Alexandria was destroyed in 391 AD.