White Fathers Mission in Tanganyika , before 1905

White Fathers ( Latin Patres Albi PA, French Pères Blancs ) - actually Society of Missionaries of Africa (Latin Societas Missionariorum Africae , French Société des missionaires d'Afrique ) - is the name of a Roman Catholic religious order . The abbreviation of the order is MAfr , while the abbreviation SMA , which is sometimes used, stands for the Societas Missionum ad Afros , the Society of African Missions , a religious order founded in Lyon in 1856. 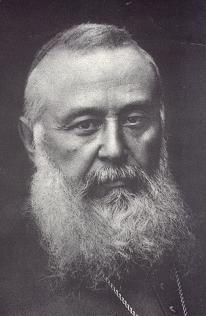 The community of brothers and priests was founded in 1868 by the then Archbishop of Algiers and later Cardinal Charles Martial Lavigerie for the Africa mission, who was also Superior General until 1892. The members should adapt to the people in language and clothing, respect their culture and build a down-to-earth church. ( See also : accommodation , inculturation .)

Their name is derived from their religious habit (white, North African Gandoura and burnouse ab). Because “white” was often confused with the identification of skin color, the term “Africa missionaries” is preferred.

The first general chapter took the form of a clerical institute, the members of which committed themselves to lifelong missionary work by means of an oath. The White Fathers were provisionally confirmed by the Holy See in 1885 and finally confirmed in 1908 .

In 1874 the Church of St. Anne in Jerusalem was given to the community . The missionaries began missionary work in Algeria and, in 1875, in Tunisia . The attempt to reach today's Mali by land through the Sahara failed in 1876 because three missionaries were murdered by Tuareg . Mission stations were established in East Africa in 1878 and in French Sudan (now Mali, Burkina Faso and Guinea ) in 1894 . In 1874 branches were founded in France , 1884 in Belgium , 1894 in Germany and 1901 in Canada .

In 1971, the White Fathers moved voluntarily from the Portuguese Africa Province Mozambique back. This happened despite a privileged status and not due to a lack of staff or security reasons, but rather as a protest against the injustices and police brutalities of the Portuguese colonial policy. According to the then Superior General, Theoz van Asten , the only reason for the recall of 38 missionaries was the fact that they could no longer give any credible testimony in the situation at that time; their presence would have become a counter testimony. This protest was addressed at the same time to the bishops of Mozambique and Portugal , who remained silent on Portugal's policy. The fact that a larger group of missionaries officially and voluntarily withdrew from a country for the reasons mentioned had not yet occurred in the missionary history of the Catholic Church.

The White Fathers gave important impulses for the Christian-Islamic dialogue . In 1926 they founded the “Institute for Arabic and Islamic Studies” in Tunis, which was relocated to Rome in 1964 as the “ Pontifical Institute for Arabic and Islamic Studies ” (“Pontificio Istituto di Studi Arabi e d'Islamistica”). In 1978 they founded the Christian-Islamic Meeting and Documentation Center (CIBEDO) , which in Frankfurt / Main - since 1998 as a specialist unit of the German Bishops' Conference - promotes interreligious dialogue and the coexistence of Christians and Muslims . The manner in which the White Fathers live their faith and meet the Muslims without appropriating them, which is characterized by respect for the spiritual experiences of others, is now also very much appreciated by young people who, in secularized contexts, often offer church-theological offers can do little.

Four White Fathers were among the 19 martyrs who were beatified in Oran, Algeria on December 8, 2018 . You were murdered in Tizi Ouzou (Algeria) at the end of 1994 . Christian Chessel, the youngest of these four Africa missionaries, has left behind a deeply spiritual and biblically oriented reflection on missionary work among Muslims with his text Mission of Weakness . This writing has much in common with the texts published by the Trappist community of Tibhirine before seven monks of this Notre-Dame de l'Atlas monastery were kidnapped and murdered in the spring of 1996. You are among the 2018 beatified. Her life and martyrdom became known worldwide through the 2010 Cannes award-winning film Of Men and Gods .

The mission society was aware of the importance of the media from the start. Its founder, Cardinal Lavigerie, used it primarily for the publication of his speeches against slavery. In 1894 the first issue of the mission magazine “Afrikabote” appeared in Germany. This magazine was renamed "Afrika" in 1957 and was incorporated into the bimonthly continents magazine in 1967 , which is published jointly by 24 mission orders and missio Aachen. Like the other religious orders, the White Fathers present their work in "Continents" in a separate section, which appears in a country-specific version for Switzerland, Luxembourg and Germany. The editor responsible for the German part, Father Hans B. Schering, also published the quarterly newspaper “Another” up to 2014, which was aimed at the relatives, friends and benefactors of the Africa missionaries. Last but not least, this also addressed the former students of the White Fathers, who had attended school in the mission houses in Haigerloch , Zaitzkofen , Amberg , Linz am Rhein , Rietberg and Großkrotzenburg until the mid-1960s and who reported their time in internet forums and publications as Discuss missionary students.

The White Fathers publish two scientific journals: since 1937 in Tunis the IBLA. Revue de l'Institut des Belles Lettres Arabes with a linguistic, ethnological and enthnographic orientation and since 1957 in Jerusalem Proche-Orient Chrétien .

The chapel of the Afrikanum in Cologne

Currently ( as of 2011 ) the White Fathers work in 20 African countries. In Europe there are religious houses in addition to Belgium, Germany and France also in Great Britain, Ireland, Italy, Luxembourg, the Netherlands, Poland and Switzerland; in America in addition to Canada also in Mexico, the USA and Brazil; in Asia since 1991 also in India and the Philippines.

In January 2011 the community consisted of 1,495 fathers and friars. On May 27, 2016, the general chapter of the “Society of Missionaries of Africa” elected Father Stan Lubungo , Africa missionary from Zambia, to succeed Richard Baawobr (Ghana) as the new Superior General of the Missionary Society of Africa Missionaries.

In 1869 Lavigerie also founded the White Sisters ( Missionary Sisters of Our Lady of Africa ).

The headquarters of the German province of Africa missionaries is in Cologne with the Afrikanum with its own chapel.