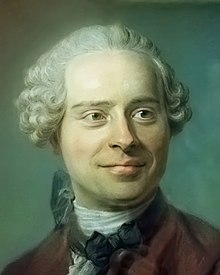 Jean-Baptiste le Rond [ 'ʒɑ̃ ba'tist lə ʁɔ̃ dalɑ̃'bɛːʁ ], called D'Alembert , (born November 16, 1717 in Paris ; † October 29, 1783 ibid) was a French mathematician and physicist and a philosopher of the Enlightenment . Together with Diderot he was editor of the Encyclopédie .

At the instigation of General Louis Camus Destouches (1668–1726), D'Alembert was adopted as a foundling by Madame Rousseau, née Etiennette Gabrielle Ponthieux (approx. 1683–1775), the wife of the glazier Alexandre Nicolas Rousseau ; he stayed there until the age of 48. However, his biological father enabled him to have a comprehensive upbringing and training.

At the age of twelve he entered the Collège des Quatre Nations and graduated in 1735 with the baccalauréat en arts . He later enrolled at the École de Droit under the family name Daremberg, which he later changed to d'Alembert. He first studied law , then medicine , before finally turning to mathematics and physics as an autodidact . His main mathematical work were his Opuscules mathématiques in nine volumes. D'Alembert was also interested in music , among other things . In 1752 he published the Éléments de la musique théorique et pratique ( elements of theoretical and practical music ) and two years later Réflexions sur la musique en général et sur la musique française en particulier ( reflections on music in general and French music in particular ).

His fame gave him access to the Paris " salons ". He was a regular at Madame de Deffand and Julie de Lespinasse , with whom he lived from 1764 on. There he met Condorcet and David Hume .

Together with Denis Diderot, D'Alembert was the editor of the Encyclopédie , the monumental work of the Age of Enlightenment . The bookseller André Le Breton commissioned him and Diderot, the Cyclopaedia of Ephraim Chambers to translate. From this the project of the Encyclopédie developed, which was very actively supported by Voltaire . With him he made a close friendship, which was maintained by a lively correspondence.

His contributions to the Encyclopédie , which appeared between 1751 and 1780, were varied. He wrote the Discours préliminaire in the first volume, a kind of “Manifesto of the Enlightenment” that made him world famous. He also wrote more than 1,700 encyclopedic articles for the work, mostly from the field of natural sciences . It was also he who set the ideological direction of the work through polemical forewords and important articles such as Dictionnaire or Genève (Geneva) .

D'Alembert also conducted correspondence with " enlightened rulers " such as Frederick II of Prussia and the Russian Tsarina Catherine the Great . But his distrust of those in power was always awake. In his Essai sur la société des gens de lettres et des grands (Essay on the Society of Letters and the Great) of 1759, he calls on intellectuals to free themselves from their humiliating role as courtiers of noble patrons . D'Alembert was also a brilliant Tacitus translator. He was a member or honorary member of the Russian Academy of Sciences (Petersburg, 1764), the Prussian Academy of Sciences , the American Academy of Arts and Sciences (1781), the Académie des sciences and the Académie française , whose general secretary he was for life 1772 was. He was a member of the Parisian Masonic Lodge Les Neuf Sœurs .

D'Alembert died on October 29, 1783 at the age of 65 from complications from a bladder disease .

He worked in the field of function theory , in 1747 solved the (one-dimensional) wave equation of the vibrating string, which is named after him today, and thus became the founder of mathematical continuum physics . The D'Alembert operator also goes back to him, with which the wave equation can be written particularly compactly. D'Alembert also worked in the field of convergence of series and found the quotient criterion , which is also called D'Alembert's criterion after him . The d'Alembert reduction process is important here . Further work concerned the calculation of probability ; a popular, admittedly unusable game system for the game of roulette , the Progression d'Alembert , is attributed to him.

With Friedrich II. Of Prussia he had been in correspondence since 1746; the initiative for the exchange of ideas by post came from d'Alembert. The reason for this was the competition held by the Royal Prussian Academy of Sciences , for which d'Alembert wrote Réflexions sur la cause générale des vents . With her he also endeavored to become a member of the Berlin Academy. Pierre-Louis Moreau de Maupertuis advised him on his project, and so he wrote a dedication poem to the Prussian king for his script in Latin. But there was no direct answer from Frederick II; instead, Jean-Baptiste de Boyer, Marquis d'Argens , answered . When d'Alembert had published his Discours préliminaire de l'Encyclopédie in 1751 , Frederick II became aware of him. The Prussian king offered d'Alembert a position as president of the Royal Prussian Academy of Sciences, and although d'Alembert was at times undecided whether he should move his center of life to Prussia, he withdrew from the offer. From 1754, however, d'Alembert received a Prussian pension of 1200 livres for his life's work, which was very much appreciated by Friedrich . In the summer of 1763, d'Alembert traveled to Sanssouci Palace for a three-month stay . During his stay in Potsdam he visited Leonhard Euler in Berlin. Euler was appointed to the Royal Prussian Academy of Sciences by Friedrich II in 1741, which he left in 1766 and returned to St. Petersburg , where Catherine the Great had resided as Empress of Russia from 1762. In his relationship to Frederick II, d'Alembert differed from Diderot , who had an antipathy towards the Frederician State and its first representatives from the Seven Years' War at the latest (from the Prussian point of view also referred to as the Third Silesian War ).

At the end of 1757 and the beginning of 1758 the Encyclopédie experienced a serious crisis under the editorship of Denis Diderot and d'Alembert. The reason for this were the articles on the city of Geneva written by d'Alembert at the suggestion of Voltaire. The entry triggered extensive discussions and numerous letters of protest and ultimately divided the sometimes already strained relationship between the two editors.