The hygrometer (from ancient Greek ὑγρός hygrós 'moist', 'wet' and μέτρον métron ' measure ', 'measure') is a measuring instrument for determining air humidity . The air temperature can be used to determine the water vapor content of the air from the humidity . 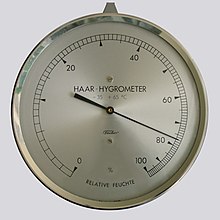 Hygrometers are used to measure humidity . Depending on the device version, the different humidity levels can be determined.

Absorption hygrometers contain a hygroscopic (water-attracting) material, the properties of which change with moisture. The best known is the hair hygrometer . It contains mostly human hair that expands with increasing moisture. The difference in length between completely dry air (0% relative humidity (RH)) and saturated air (100% RH) is around 2.5%. In the past, various natural hairs from humans, sheep or horses were used; today only human hair and synthetic fibers are used. The traditional weather houses are basically hair hygrometers as well.

In the case of inexpensive hygrometers, rolled-up metal strips coated with plastic are sometimes used, which also react with linear expansion (similar to bimetal thermometers ). However, these so-called spiral hygrometers are usually not as precise as hair hygrometers.

Another possibility is to measure the weight gain of a material when it stores water.

Modern electronic absorption hygrometers, on the other hand, are based on changing the electrical properties of a sensor: 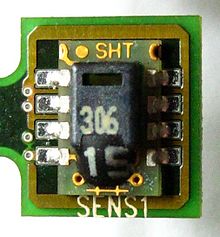 Psychrometers consist of two thermometers of the same type, the mercury vessel or the temperature sensor of one of which is covered with a continuously moistened gauze stocking. Heat is removed from the wet thermometer by evaporation and, as a result, it shows a lower temperature than the dry thermometer. The temperature difference between the two thermometers is a measure of the relative humidity. With the help of the Sprung formula, all relevant moisture measurements can be calculated. With the help of graphic psychrometer boards, the relative humidity can also be determined directly on site without an invoice. As a rule, a distinction is made between mechanically working ( aspiration psychrometer , sling psychrometer ) and electronic devices. The theoretical basis for the device is provided by the mixing theory according to Dr. Sunday. It is assumed that both thermometers are continuously ventilated at approx. 3 m / s. Few psychrometers still work according to the diffusion theory, which assumes that there is no ventilation at the thermometer vessel.

Handheld device for humidity measurement with a capacitive sensor

In addition, there are a number of other options for determining air humidity, which are used comparatively rarely, for example the resistive method (determination of the impedance of the alternating current resistance of a hygroscopic element), the lithium chloride dew point hygrometer (measuring method based on the hygroscopic properties of lithium chloride based) or the measurement of the neutron deceleration (neutrons slow down when they hit hydrogen nuclei). All procedures have their advantages and disadvantages, there is no such thing as the ideal hygrometer for all applications.

Special methods are used to determine the soil moisture . A particular problem with this determination results from the soil's content of various salts, which can affect most measurement methods and often also have a corrosive effect on sensors. 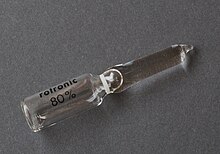 Ampoule with a saline solution for calibration of humidity sensors

To the usual maintenance and adjustment at Haarhygrometern heard the regeneration . Since these hygrometers are based on natural fibers, which can lose their function if they dry out too long, this effect can be counteracted by occasional regeneration. Instruments that have already become inactive can be reactivated in this way. To do this, the device is wrapped in a damp cloth for about an hour or the measuring element, if directly accessible, is moistened with distilled water. The device should then display around 94–98% relative humidity. If this value is not displayed, it must be adjusted to this value. For this purpose, hair hygrometers have an adjustment screw that enables adjustment.

In the construction sector, various methods are used to determine moisture in order to check the moisture in the building structure:

In addition to locating penetrating or escaping moisture, such measurements are used, for example, to determine the degree of dryness of the screed for subsequent work.

Different methods of measurement were used as early as the Middle Ages, but they only provided inadequate results. Even today, the inflorescences of dried daisy family (Asteraceae), such as the acanthus-leaved boarwort , are used to predict rainy weather in southern France . An explanation can be found in the article silver thistle .

The first hair hygrometer was demonstrated by Horace-Bénédict de Saussure in 1783 . He used a blonde woman's hair for this. Around 1820 John Frederic Daniell succeeded in measuring the humidity above the dew point , in 1877 the astronomer Wilhelm Klinkerfues received a patent for a bifilar hygrometer with two parallel human hairs, and in 1887 Richard Assmann constructed the first psychrometer .