Dew point curve in blue. Any state (red point) has a dew point with the same water vapor partial pressure (blue point). The dew point difference (here: 20 ° C) and the relative humidity can be read off the horizontal and vertical auxiliary lines. 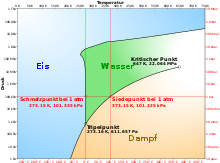 The dew point describes the temperature of a moist gas mixture in a state of equilibrium in which the condensation and evaporation of the moist component are exactly in balance. The gas is then just saturated with the steam . The moist gas mixture is usually a mixture of water vapor and air, but it can also refer to another mixture with a condensable component. The vapor partial pressure that prevails at the dew point is the saturation vapor pressure . How high the saturation vapor pressure is at a given temperature results from the phase diagram of the water or the condensable component of the gas mixture in question. Since the non-condensable components have almost no effect on the behavior of the steam, the dew point of moist air does not depend on the total pressure, but almost exclusively on the partial pressure of the water vapor contained. Each such state of equilibrium is determined by a point in the pT diagram. If you connect all these points with each other, you get the dew point curve as a phase boundary line . In some specialist books, the term dew point is not used for the temperature alone, but for the state of saturation, the associated temperature is then called the dew point temperature .

Below the triple point in the phase diagram , the gaseous state of aggregation does not change into the liquid, but into the solid. So frost forms and one speaks here of the frost point instead of the dew point. Here there is a dynamic equilibrium between solid and vapor phase, so that sublimation and resublimation are exactly in balance.

In meteorology , the dew point is used as a measure of air humidity. If the respective air temperature corresponds to the dew point, the relative humidity is 100%. The term sultriness can be defined using the dew point: Sultry is felt when the dew point exceeds approx. 16 ° C.

If the temperature of the air falls below its dew point, which is often the case in the early morning hours with air close to the ground, some of the water vapor liquefies: dew or fog forms, and frost at lower temperatures . It is sufficient if individual objects, for example cars, cool down below the dew point through heat radiation . Moist air passing by then also cools the surface of the objects to below the dew point and the windows mist up with condensation or ice flowers . If the temperature rises above the dew point, this precipitation dissolves again.

Similar processes are also responsible for the formation and dissolution of clouds: heated air masses rise from the ground and cool down by approx. 1 ° C per 100 m. One speaks of the " dry adiabatic temperature gradient ". Initially, the amount of water vapor contained in the air package remains unchanged. At a certain altitude, the temperature of the air mass reaches the dew point. This is where condensation sets in and a cumulus cloud forms. The cloud base is exactly at this height. If the air rises further, the temperature decreases more slowly because condensation heat is released (see moisture adiabatic temperature gradient ). In order to be able to assess the development of the clouds, vertical profiles of the temperature and the dew point are regularly created with the help of radiosondes . This information about the stratification of the atmosphere can be used to predict thunderstorms, for example.

In the case of building materials that are permeable to water vapor and permeable to diffusion , water vapor diffuses through the component due to the concentration gradient. Where in the wall the material temperature is lower than the dew point, the water vapor condenses and wets the component. This occurs mainly in winter on above-ground floors and in summer in cellars or earthworks. The amount of condensation that has accumulated has to dry out again over the year, otherwise there is a risk of structural damage. The Glaser method is used to calculate or graphically determine the amount of condensation . As Taupunktebene the surface is referred to which the temperature corresponding to the dew point of water vapor. The moisture transport can be reduced by a vapor barrier .

In poorly insulating windows, the room air cools below the dew point and moisture steams up the glass. At temperatures below the frost point, ice flowers form on the window pane.

If good heat-insulating glazing and exterior doors are installed, the window frames and door frames often represent the coldest spots in the room. In order to avoid the formation of condensation and mold in winter, a surface temperature below the dew point of the room air should be avoided, as everywhere.

With the help of condensation dryers , moisture can be separated from room air. The air temperature must be well above freezing point. The room air is cooled down to below the dew point in a heat exchanger, the condensable humidity runs off, then the air dehumidified in this way is heated again via a heat recovery register. The functional principle is also used in the tumble dryer .

As a side effect, heat is introduced into the room. On the one hand, by converting the electrical energy used to operate the refrigeration machine and fan into waste heat and by releasing the heat of condensation from the phase transformation of the water. In addition, there is a certain amount of air circulation and mixing.

If a moist gas mixture is compressed, the vapor partial pressure and thus the dew point temperature rise as well. The water vapor then condenses at higher temperatures. In pneumatics , the compressed air is therefore dried before use, e.g. B. with refrigeration dryers . This means that the compressed air can also be used at low temperatures without water condensing in the pressure lines or transport containers or freezing water clogging the lines.

Dew points for other gas mixtures

In the case of multi-component systems (for example exhaust gases , distillation mixtures , natural gas) , a dew point range can be specified , analogous to the boiling range or condensation range .

Calculation of the dew point of moist air

In the unsaturated state, all of the water is available as steam. One can write for it:

The partial pressure is the pressure that the respective mixture component would assume if it were to fill the mixture volume alone at the same temperature . The thermal equation of state for ideal gases can be formulated:

The relative humidity is the ratio of the partial pressure of the vapor to its saturation vapor pressure .

From equation (7) can be derived

The
parameters apply to the saturation vapor pressure above water

in the temperature range (below 0 ° C for supercooled water ).

The
parameters apply to the saturation vapor pressure above ice

in the temperature range .

The validity of these approximations is limited to the temperature range that already applies to Magnus' formula (10).

Dew point as a function of temperature and humidity.

Dividing equation (9) by equation (13) results in

After inserting the Magnus formula, the relationship can be reformulated

The validity of these approximations is limited to the temperature range that already applies to Magnus' formula (10).