A radiosonde is used in meteorology and aerology to measure parameters of the earth's atmosphere up to heights of around 20 km to 35 km ( stratosphere ). It is carried by a weather balloon and transmits the measured values ​​such as air temperature and its gradient and humidity to the ground station via radio data transmission . In the case of probes with an integrated GPS receiver, also the position of the probe. With some types, the altitude is determined by continuously measuring the air pressure and GPS .

Balloon-borne probes are also used in other specialist areas - see balloon probe (measuring instrument) , some of which can reach even greater heights. The altitude record for radiosondes is around 39 km or 2.5 hPa ( German Weather Service ).

A radio or radio probe ( English radiosonde ) is - as defined by the International Telecommunication Union (ITU) in the Radio Regulations - an automatic radio transmitter of the Weather Support Radio Service , which is generally in an aircraft , a free balloon , at a parachute or a kite is entrained and weather characteristics transmitted. 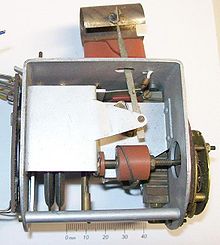 Sensor and coding part of an older radiosonde from the 1960s

Since the early 1890s, unmanned weather balloons, so-called recording balloons, have carried self-recording measuring instruments into the open atmosphere. Compared to manned balloon flights, these had a clear cost advantage. In addition, heights could be reached that were not accessible to people in the open basket despite the oxygen supply. However, the measured values ​​could only be read with a time lag and only when the instrument that had returned to the ground was found. The German meteorologist Hugo Hergesell was one of the pioneers of atmospheric sounding with weather balloons . As head of the International Commission for Scientific Aviation , he called for the construction of lighter balloon-compatible instruments. Recognizing the potential of wireless telegraphy early on, he made attempts as early as 1908 to transmit recordings of recording balloon instruments by radio, but failed because of the still inadequate technical possibilities. The name "radiosonde" goes back to Hergesell.

In 1917, Max Robitzsch and Friedrich Herath (1889–1974) in Germany and Pierre Idrac (1885–1935) in France succeeded in sending readings from instruments attached to weather kites to the ground via kite wire. However, kites could not advance to the height attainable by weather balloons, and they could not be used in all weather conditions.

In 1921 Paul Duckert (1900–1966) began at the Lindenberg Aeronautical Observatory , whose director was now Hergesell, to deal with the development of the radiosonde. A first step in 1926 was the double aiming of a radio transmitter attached to the balloon in order to determine its flight path and speed. Similar experiments were carried out by William Blair in the United States. At the end of the 1920s, several meteorologists were working with the first prototypes of radiosondes.

On January 7, 1929, Robert Bureau (1892–1965) succeeded in Trappes for the first time to receive the signals from a radiosonde that transmitted temperature values ​​from the free atmosphere. In the spring of the same year he added a barometer to the probe. The inventor of the radiosonde, however, is often seen as the Soviet meteorologist Pawel Moltschanow (1893–1941), whose radiosonde, which was first successfully launched on January 30, 1930, became the standard for future developments. The probe measured temperature and pressure and transmitted the values ​​coded as Morse symbols to the receiver. On May 22, 1930, Duckert followed suit with an independently developed probe that was able to measure temperature and pressure as well as humidity. The probe transmitted measured values ​​until the balloon burst at a height of over 15 km.

On the Arctic voyage of the Zeppelin LZ 127 , Moltschanow launched several radiosondes in July 1931. The new technology was used extensively and systematically in the International Polar Year 1932/33. The Finn Vilho Väisälä , who launched his first radiosonde on December 30, 1931, began commercial production in 1936.

The radiosonde was further developed in 1942 by the Berliner Josef Graw . The conversion of the measured values ​​into Morse symbols takes place in the Graw probe by the fact that the pointers of the measuring devices scan a pattern of conductive material which is applied to a rotating roller, the Graw's Morse roller .

The moisture sensor ( hair hygrometer ), the battery and the telemetry transmitter (UHF tube transmitter with a triode ) cannot be seen in the picture.

Radiosonde with integrated GPS receiver from 2008. On the left the quadrifilar helix antenna for GPS reception, on the right as a metal band the temperature sensor and below the sensor for humidity measurement

Measuring sensors on the radiosonde measure various parameters such as air pressure (P), temperature (T) and humidity (U) while the balloon rises and transmit this measurement data continuously to the ground station via radio data transmission. The measurement of the air pressure is only provided as an option for many probes today, since the computational determination from the GPS altitude makes the measurement unnecessary in many cases. Special sensors can also measure the ozone concentration or radiation.

In addition to the (P) TU probes, there are also so-called wind or pilot probes that can be used in place of the earlier optically tracked pilot balloons or wind rises (balloon with radar reflector but without radiosonde). It is only about recording wind direction and speed. These probes are made correspondingly simpler and therefore cheaper, since no sensors and their signal processing are available. Some models are particularly light and simple, but are therefore only suitable for measurements in the troposphere (low battery capacity, lower transmission power, etc.).

Temperature probes play practically no role today. They only transferred the temperature as the only measured variable. Usually it was very simple electronic analog circuits that changed the frequency of a tone according to the temperature and transmitted it to the ground station via a small transmitter in a frequency-modulated manner. Tracking was only possible via radar using appropriate reflectors .

Today, data transmission mostly takes place in the frequency range from 400 MHz to 406 MHz. Depending on the type of probe, channels of different bandwidths are used . Modern probes only occupy about 5 kHz. Each point of ascent uses the frequencies assigned to it. As a rule, there is a main frequency and an alternate / restart frequency that is used if the probe that has already started is faulty and a restart is necessary or the main frequency cannot be used due to interference. There are also radiosondes which transmit the data in the frequency range of 1.68 GHz.

Most probe models also have adjustable mechanisms to switch them off after a certain time, after the balloon has burst or other criteria while still in flight.

The probes and especially the batteries are housed in a foam polystyrene housing for thermal insulation , with only a wire antenna and sensors on the outside .

Today, disposable radiosondes are usually used, for which no finder's fee is paid. Possible finders are sometimes asked by stickers or leaflets affixed to the probes to dispose of the radiosonde with electronics and batteries. A radiosonde ascent costs around € 300 with a hydrogen-filled balloon and radiosonde and around € 400 with a 1.8 m³ helium filling.

The ascent of the probes takes place on a latex balloon filled with helium or hydrogen , which expands more and more with increasing altitude due to the decreasing air pressure until it finally bursts.

Despite the ever lighter probes, a balloon of the appropriate size is required to reach the required height. According to the WMO recommendation, the ascent takes place at around 300 m per minute.

The probes fall back to the ground after the balloon bursts; Parachutes can be used to reduce the speed of fall. The falling speeds cannot be reliably predicted when using parachutes, since the function of the parachute can be impaired to different degrees by tangled cords or balloon remains.

The teams of the DWD usually use the parachutes integrated in the balloons, which are made of white tissue paper and are closed at the top, while external parachutes made of red plastic with an opening on the cap are used in the Bundeswehr ascent points, which split it in two Sizes there.

Many stations let a probe go up every twelve hours, usually at noon and midnight. In Germany, this takes place at twelve stations (five of which are automatic: Norderney, Essen, Stuttgart, Munich and Meiningen). The previous probe is no longer active at this point. Some stations start a probe every 6 hours ( Idar-Oberstein , Bergen , Kümmersbruck , Lindenberg ).

If necessary, all stations can also carry out additional probe ascents at shorter intervals, if the weather or other environmental influences require it.

Regular explorations in Germany (as of 2018)

If necessary, promotions in Germany

As part of military exercises and maneuvers, radiosonde ascents are also very often carried out, but here mostly 100 g balloons are used, which only reach a height of around 17 to 18 km, and probes from the manufacturer Graw. Usually the frequency range 403.03 ... 403.89 MHz is used for this. The starts take place from mobile ascent points on site or military training areas. Occasionally, the take-offs also take place in barracks or other fixed military offices and facilities.

Educational and research institutions also carry out occasional probe ascents, whereby special sensors and measuring devices may be used here. The Lindenberg Meteorological Observatory occasionally carries out ascents for research and comparison purposes with a number of different measuring devices and sensors, where different types of probes are also used.

Probe and device manufacturers are also carrying out radiosondes for development and testing purposes.

Regular explorations in the Netherlands (as of 2018)

Regular explorations in Belgium (as of 2018)

So-called probe hunters observe the flight of the probes out of private interest or receive the radio data with suitable radio receivers and decoder software to obtain the transmitted measurement data. Using the continuously transmitted position data, the probe can be tracked until it drops in order to recover it. Probes can also be found by means of radio direction finding.

In the evening light, the probes appear like a bright first magnitude star , sometimes as bright as Venus . The shape of the balloon can usually be seen with a telescope , as well as the moment of bursting and the parts floating down.

Depending on the wind conditions, the distance from the starting point of a radiosonde to the landing point can be from a few kilometers to over 300 km or more.

Radiosondes on other planets

The Soviet Vega space probe launched two radiosondes into Venus' atmosphere in 1984, which could be tracked over two days.