Storm with heavy rain and hail 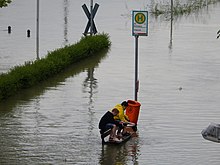 Extreme events in the sense of meteorology are weather conditions that deviate significantly from the average in their course (shown in weather elements ). The basis is a climatological normal period , a geographical reference to a climate classification , the annuality of the weather elements and other impact factors (such as the flood level) as well as the insurance damage or the macroeconomic (insured and uninsured direct damage, consequential damage and restoration, including the Victim). The term is not based on any precise definition, but is a pragmatic expression of the documentation of climate and weather in climate impact research or insurance : “Extreme events are events that differ greatly from the average and are therefore exceptional. It only depends on the specific application how strong this deviation actually has to be in order to classify an event as extreme. "

Extreme events are of particular historical and economic importance. However, they are unsuitable as climatological indicators: on the one hand, they occur very irregularly, and on the other hand, the mean value of a normal period must be known in order to be able to classify a weather anomaly as such. However, the current long-term average is made up of the occurring weather events, so current extreme events can only be compared / put into contexts with expired measurement periods.

The German Meteorological Service defines the following events as severe weather (level 3 of the criteria scale in the range 0–4) if the specified thresholds are exceeded:

The following events are still used for severe weather warnings from the meteorological services:

The following events are generally considered to be more specific storms:

In addition, since 1993 the International Civil Aviation Organization ( ICAO ) has set up nine Volcanic Ash Advisory Centers , which monitor airspace for volcanic ash worldwide and warn air traffic if necessary. Because of the meteorological prognosis of the trajectories of aerosol emissions, these belong to the subject area.

Between 1980 and 2016 z. In Germany, for example, according to the insurance group Munich Re, the damage caused by extreme weather (thunderstorms) practically quadrupled from an average of around 580 million to over 2 billion euros.

According to a study by the Joint Research Center of the European Commission published in the journal The Lancet Planetary Health , up to two thirds of the European population could be affected by weather extremes by the year 2100 without further adaptation measures to global climate change between 2071 and 2100 in the EU , Switzerland, Norway and Iceland 80,000 to 240,000 people die every year. Between 1981 and 2010, around 3,000 Europeans per year lost their lives due to weather disasters. 99% of weather fatalities between 2070 and 2100 could die from heat.

Early September 2017 brought with over 6 million sufferers in the US state of Florida the hurricane Irma one of the largest evacuations with it.

In addition to damage, injuries and deaths, storms also cause people to be displaced. In 2016, almost 24 million were on the run due to extreme weather conditions, mainly in poor areas. In richer countries, on the other hand, only just under a million people were affected each year.