A sand storm is a storm or strong wind that carries sand or dust with it. It occurs especially in deserts . A sandstorm has to be differentiated from a sandpipe , which remains spatially more limited.

Sandstorm over the Atlantic 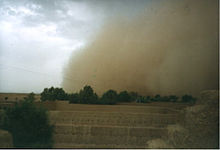 Sandstorm photographed from the air in the Namib . The storm is much more violent on the ground than it appears from the air

A sandstorm is a very dry and hot wind, which in arid regions first whirls up large quantities of sand and then carries it with it. Some storms transport up to 100 million tons of sand over sometimes very long distances. The distance that the sand travels depends on the size of the individual sand particles. The largest particles form slow dunes in sheltered places . It is estimated that in 2004 sandstorms moved a total of around 2-3 billion tons of sand.

Loose particles lying on the surface can be lifted into the air or rolled along the ground (sand crawling), thus being removed or eroded. This process is called deflation . When the finer particles the size of the silt ( grain size from 0.002 mm to 0.063 mm) are lifted into the air in dense, high clouds, the phenomenon is called a dust storm . This is not to be confused with a sandstorm in which the larger sand particles (grain size 0.063 to 2 mm) are transported. In this case, a low cloud of moving sand is formed, which is only a few centimeters to max. 2 m from the ground.

A dust storm approaches as a dark cloud that extends from the ground to a height of several kilometers. Visibility is reduced to a few meters and fine, asphyxiating dust penetrates everywhere. It is estimated that one cubic meter of air can contain up to 1 g of dust.

The process in a sandstorm is different. Sand is too heavy to be carried to great heights and long distances. It is driven across the ground in a jumping motion called a saltation .

African desert sand that settles in the Caribbean is held responsible for the coral death there. The same desert sand is used as fertilizer in the South American rainforest .

Sands that are blown by the dry areas of the Aral Sea are polluted with pesticides from cotton cultivation and thus cause corresponding pollution in the sedimentation areas.

An important reason for this development is the increasing use of off-road vehicles in the deserts. The off-road vehicles break up thin, hardened crusts on the desert surface, thereby destroying the erosion protection for the sand below. The introduction of cattle and sheep into the interior of Australia had the same effect . The hooves destroyed the thin layer of vegetation.

In many areas where sandstorms occur regularly, they are given local names:

On April 8, 2011, a sandstorm was the cause of a pile-up on Autobahn 19 between Rostock and Güstrow. There were 8 dead and 131 injured. Large amounts of soil were blown over the highway from a neighboring field, reducing visibility to around five meters.

With the construction of the Green Wall , China is trying to contain the sandstorms that regularly hit Beijing . Overall, the Chinese want to plant trees on an area of ​​4 million square kilometers by 2050 - an area ten times larger than Germany . This makes the Green Wall the largest reforestation project in human history.

In synoptics , the following symbols and codes, defined by the World Meteorological Organization, are used to save space when specifying a weather condition with a sand or dust storm. The symbols are entered into a ground weather map as part of the data from a weather station . The assigned number key applies to both the SYNOP and METAR codes.